The founder shares her tips for all-ages baking. 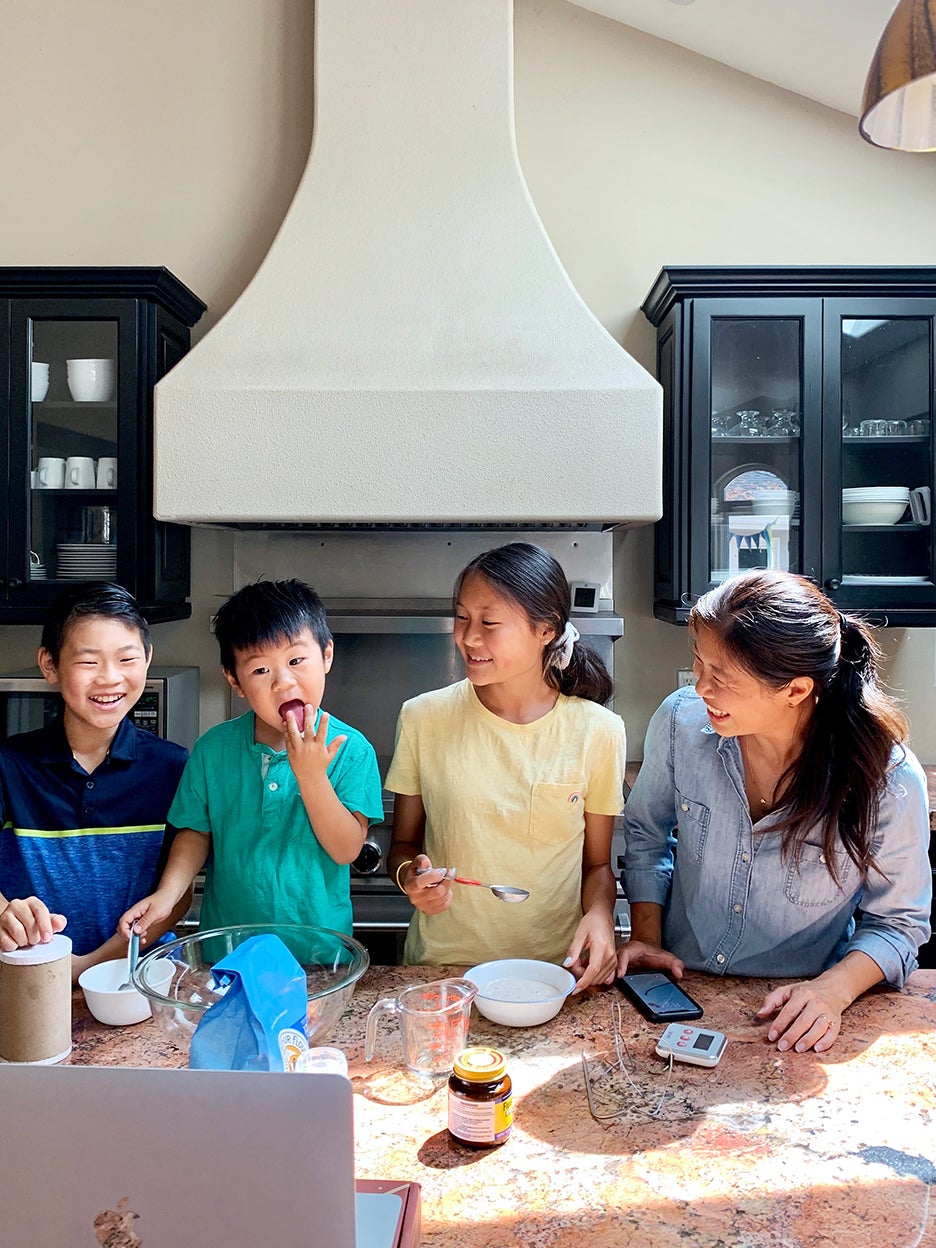 Like many people, KiwiCo founder Sandra Oh Lin spent the early months of sheltering in place experimenting with sourdough starters and broadening her cooking skills. Unlike many people, she did so with her very own kitchen crew: her husband and three children, ages 13, 11, and 4. It started with a bag of tapioca flour. “We’d been chatting with family friends about making homemade boba bubble tea with it, and they had actually been thinking of doing the same thing,” remembers Lin. “So we decided to try making it together over FaceTime.” Four hours later, a new ritual was born, and every week since, Lin and her family have hosted Zoom cooking clubs with friends and relatives from around the country. “We were all craving connection, and having the opportunity to do something fun and creative, even from a distance, was such a silver lining,” she says.

Without the usual kids’ activities that eat away at parents’ weekends, they’ve had time to expand on a menu full of tasty treats. There was the lasagna that won over her children, and a Japanese cold noodle dish called hiyashi chuka they made during a particularly warm weekend in the Bay Area. There have been doughnuts and lemon bars and bagels (lots and lots of bagels). As is expected when your sous chef is 4, there have also been a few mishaps, but it’s all part of the fun. “It’s a good lesson in learning to be okay with small things going wrong—plus kids are super-flexible,” says Lin.

Now she hopes other families will get in on the action. Somewhat serendipitously, Lin and the KiwiCo team had been brainstorming a new product around baking earlier this year. “Right before we were sheltered in place, bread was a front-runner,” says Lin. “Then quarantine hit, and our product designer was having a hard time finding yeast because of the shortage!” Fortunately it all worked out, culminating in the brand’s latest offering (which officially launches Oct 15): Science of Cooking: Bread & Butter.

The kit includes three main recipes: a standard bread, rolls, and butter. Each one comes with tips for tweaking—for example, turning the regular loaf into cinnamon bread—and there’s a lesson about the chemistry behind things like emulsion and gluten activation. It’s all been given the stamp of approval by Lin’s brood of newly minted gastronomic experts: “My 11-year-old in particular has become a butter-making machine,” says Lin, laughing. “It comes in handy, because now we make bread very often.” Here, she shares her tricks for getting your kids involved in the kitchen.

Get them Interested Before They Even Put on an Apron

“We let the kids pick what they’re going to cook; it helps them feel invested from the get-go,” says Lin. Usually it’s her 13-year-old tracking down recipes online (her latest craving: snickerdoodles), though sometimes the younger ones will pipe up with requests. “That way, the potential outcome is something they’re excited about,” she explains.

Lin gives each of her kids a specific task according to their age: Her eldest typically runs the show, and the other two are her sous chefs. The older two oversee tasks that involve more math, like measuring, and her 4-year-old is a pro at dumping and stirring—though there have been occasional recipes where all three work in tandem. For example, dumpling night: “They all helped roll out the dough, fill each one, and pinch them closed.” says Lin. “There’s something very tactile and sensory about that, almost like something you can make with Play-Doh.”

Keep It Short and Sweet

As stressed-out adults, we might take comfort in meals simmering slowly away on the stove or find it therapeutic to proof and knead dough over the course of a few hours. Children, however, operate on a different timetable. “It’s important that the recipe doesn’t call for anything too complicated and is broken out into bite-size activities,” suggests Lin. For best results, make sure whatever you’re prepping aligns with their attention span.

Let Them Surprise You

“Kids can often do more than we think they might be able to,” says Lin. She likes to empower hers in the kitchen by giving them more responsibility incrementally—even something small, like letting her preschooler graduate to mashing fruit for banana bread with a butter knife. “Give them permission to have fun with it! It makes them feel like they’re a part of the process, and they’ll end up creating something they’re proud of,” she adds.