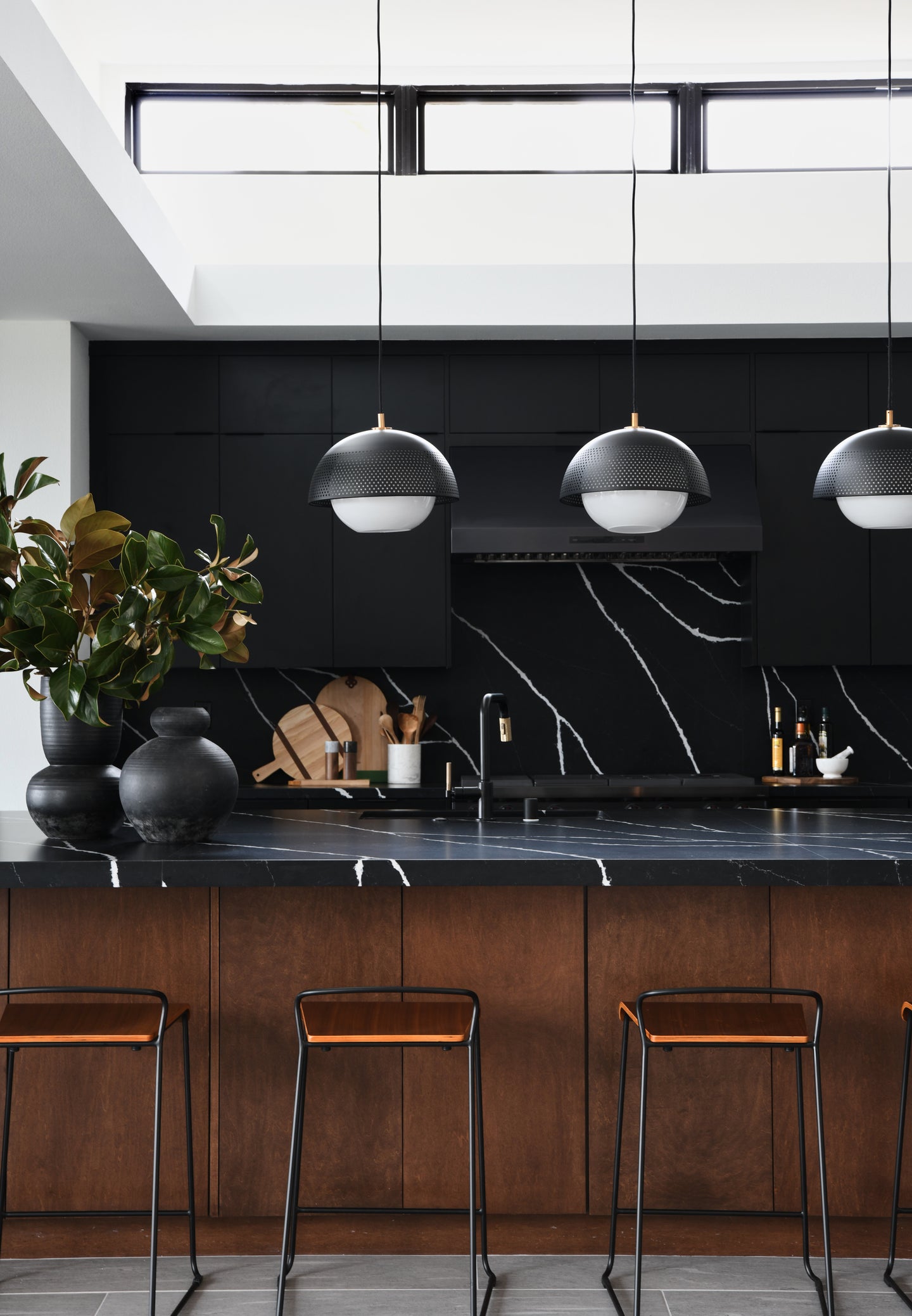 Just when we thought kitchen islands had hit a plateau, cue Bobby Berk to the rescue. Among the designer’s many new ventures (he announced a furniture collaboration in February and just debuted a fresh website launch), the Queer Eye star recently designed the first of three model homes in San Diego, California. We’re excited to share that the bold home’s daring kitchen color palette did not disappoint.

“We were really able to run with the design and do something that was original, bold, and well, black,” says the designer of starting from scratch.

We all know that the kitchen is the heart of the home, but in the case of this space, Berk wanted it to also serve as the focal point. “The kitchen is open to the entry, living room, as well as the outdoor areas, so designing something that was the ‘jewel’ of the house was high on our priority list,” he adds.

With a large footprint at his disposal and an edgy vision in mind, the designer turned the drama dial up a notch with a killer eat-in island and a showstopping countertop with a backsplash to match. Want to cook up your own statement kitchen? Here are four design lessons we learned from the pro’s latest project.

An open and airy kitchen layout sounds like a thing of dreams until you have to figure out how to visually delineate your cooking space from the living and dining rooms. Both a blessing and a curse, the large, established footprint of this kitchen meant that Berk could maximize storage with floor-to-ceiling cabinetry. It also meant that it’d be harder to create visual cohesion. His workaround? A unified cabinet color scheme.

“It’s a trick that helps the large wall of cabinets feel like one,” says Berk. “All the cabinets blended together and created one visual piece rather than a bunch of little squares.”

Berk’s one-note palette also spans the nearby dining room, where he opted for the same cabinet profile. “The biggest challenge when designing an open space is to keep the color palette and overall style cohesive,” explains Berk. “The rooms all need to speak to each other and coexist.”

Black works best when your kitchen is drenched in light

When it comes to playing up punchy colors, Berk’s motto is fairly straightforward: It doesn’t have to be scary if you don’t want it to be. His climactic choice, for instance, reads as cool and modern—not cold and unnerving.

“Yes, it’s a dark color, but it isn’t a color that you should be afraid of,” he says. “Black is not only classic but timeless, so when we were designing this kitchen, we wanted to really go all-out with the black.”

So how do you know if black is the right path for you? The real magic of this space comes down to points of contrast: white, wood, and—most importantly—sunshine.

“Fortunately, we had floor-to-ceiling windows on the other walls that are opposite the kitchen, so the natural light helped to balance out all the black,” shares Berk.

A waterfall island is a bonus opportunity for contrast

Of course, the graphic black Silestone that makes up the countertops and backsplash is the real reason we want to coop up in this kitchen and never leave.

“The ideal kitchen island is always going to be big enough so that people can gather around it as you cook the meal,” says Berk. “To keep this one simple, we went with the waterfall countertops, and then to bring in some warmth, we used wood on the cabinets in the island.”

To combat the heaviness of the black cabinetry, Berk opted for a slab with rich white veining and incorporated dark wood cabinetry around the core of the island. The waterfall silhouette grounds the structure and emphasizes the hidden hit of warmth.

To match or not to match? That is the age-old kitchen question. While there’s plenty to love about seeing multiple materials at work in one cohesive space, there’s a time and a place for mixing things up. “When dressing yourself, you have to consider the entire outfit. The same happens in a room,” suggests Berk.

Because the designer had already landed on the matte black hue for the cabinetry and the graphic stone for the countertops, Berk resisted the urge to introduce another element to the room. “If we would have added another material to be used as the backsplash we would have had too many competing items in one room,” he says.

This gorgeous space is one of many that fans will be able to catch on Berk’s entirely new website. In addition to design tips and tricks from the pro, visitors can also shop his favorite picks for the home and beyond.

See more stories like this:  Hands Down: The 10 Best Blue Paint Colors for Kitchen Cabinets This Founder’s Gorgeous LA Kitchen Is Just as Bright as Her Brand 16 Clever Countertop Ideas That Aren’t Marble