This style of sofa warms things right up. 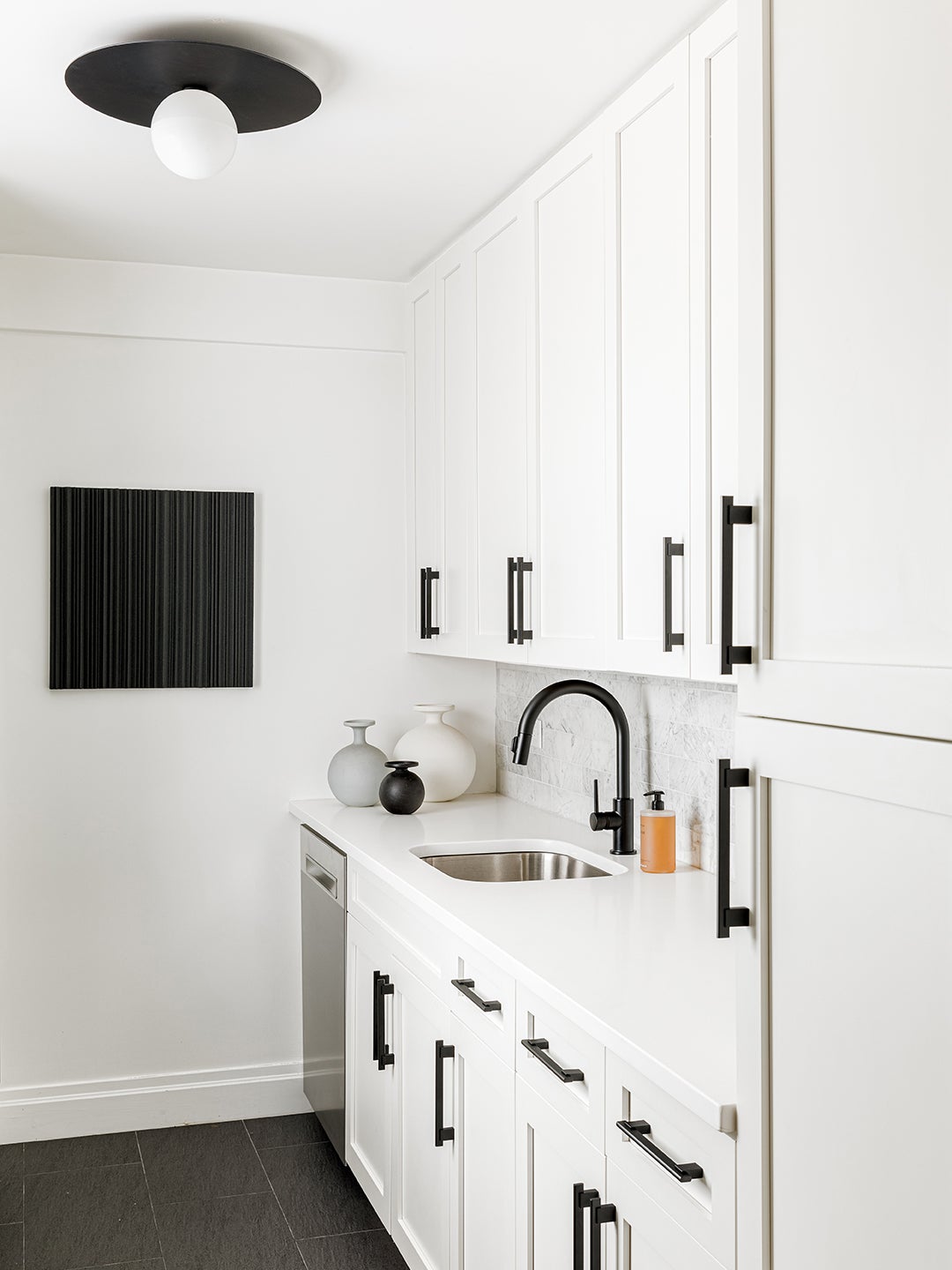 When it comes to fashion, interior designer Justin Charette rarely deviates from his all-black wardrobe. “Black is classic and it’s also really forgiving if you’re having a bloated day,” he jokes. But his pared-back dress code extends beyond the bounds of his closet. The apartment Charette shares with his husband, Alexander, a social media specialist, in New York City’s Gramercy Park is almost exclusively black and white. “It’s really easy to me; it’s a good neutral base,” says the designer.

When Charette saw the listing for the one-bedroom on Streeteasy three years ago, he was shocked by the triple exposures (you don’t see small apartments with windows on three sides all that often in Manhattan). What it meant was that natural light streams through the home all day, and because the unit is situated on a lower floor of the building, the light is soft. All that to say, the fact that it was a bright space suited his color palette even more (a dark leather sofa or upholstered bed frame doesn’t feel so cold when it’s in a sunray-filled room). “We feel a sense of calm in our home,” says Charette. Ahead, he reveals his tricks to pulling off the classic color combo, because it’s not as black and white as it seems.

Do: Invest in a Versatile Sofa

The BassamFellows sectional isn’t your average black leather sofa: The piece is modular. Right now Charette has configured it so that there is an open back, creating an ottoman section in the center. Giving it some room to breathe makes it less stuffy and bachelor apartment–like. “And it’s the perfect place for us both to take a nap at the same time,” says Charette.

The designer isn’t usually a wallpapered accent wall kind of person. “Generally I don’t like the juxtaposition of it jumping to a white ceiling,” he says. But that’s why he made an exception for Calico’s ombré print, now displayed on the long living room wall opposite the sofa. The treatment fades into white at the top, so you still get the drama, but it’s not jarring to the eye.

Artwork that doubles as optical illusions capture your attention and prevent a space from feeling stale. Take the Bower Studios mirror hanging over Charette’s bed frame and the trippy Robert William Moreland piece in the hallway, off the kitchen. “They add depth,” notes Charette. “Nothing feels like it’s one level.”

Charette’s biggest tip is to embrace the full tonal spectrum between black and white. Look closely at his living room rug and you’ll notice plenty of shades of gray (even his sectional is a slate tone—not true black). “It keeps it from being overly harsh,” he says. Peppering in accessories made out of natural materials like marble and walnut gives the neutrals life.

While Charette didn’t renovate the kitchen (he just swapped out the hardware and added a Kelly Wearstler flush-mount light), he did redo the bathroom. The revamp came in the form of a mirrored glass panel behind the sink that, when you’re looking at it straight on, provides a clear reflection, but from an angle looks like glossy black paint. This way the light that is streaming in (the light that drew Charette to the apartment in the first place) is never lost or out of sight.