This is Rebekah Carey and Alex McNall's Bitty Berkeley Bungalow. 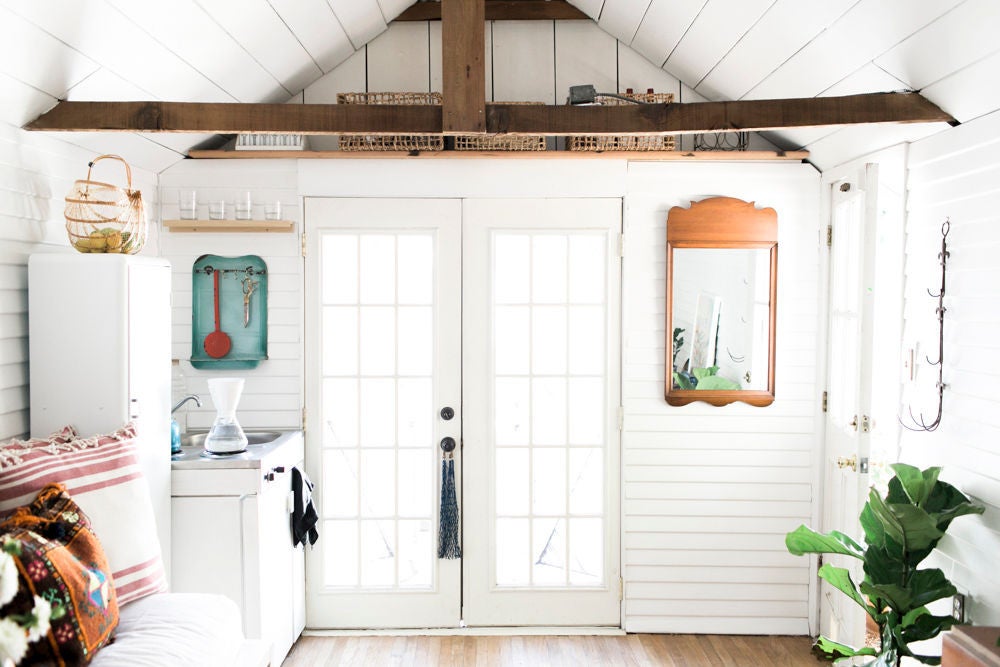 This is Rebekah Carey and Alex McNall’s Bitty Berkeley Bungalow. It’s 200 square feet, it’s too lovely for words, but most of all–it’s smart. This compartmentalized space allows for comfortable living (for a couple) without sacrificing the desire to entertain, work, or hang out with one of three super-cute pups! As the before photo shows, this project truly started from scratch. But get this–it was accomplished using no new building materials! (You need to hear about these reclaimed floors). We chatted with Rebekah to find out how this wisely designed (and well-styled!) bungalow came to be.

WHAT MADE YOU CHOOSE THIS SPACE? WHAT STOOD OUT TO YOU?

What began as one of those “jokes” you make, while watching your partner’s face to see if they think it’s crazy (at which point you would go either way on just how much you were kidding or not), I asked Alex if he thought we should just move out of our Oakland cottage into my Grandmother’s 1905 Berkley garage. Both my Grandma and Alex thought I was a little crazy, so I more-or-less dropped the idea only mentioning it on occasion when we would be visiting.

Two years later while doing an overhaul on my Grandma’s living room (scraping popcorn ceilings, fresh paint, new floors and furnishings) we were remarking how much we loved spending as much time over there as we were during the project. Our dogs had a yard to play in (as opposed to the 3 x 5 ft. back stairs that constituted a “yard” at our Oakland cottage), we were getting to spend more time than usual with my Grandma, eating dinners together, doing projects around the house for her and enjoying our favorite past-time with her: watching the “Golden Era of television” play out across her tv screen.

While we were remarking on the beautiful (and massive) native grape vine that was growing among her apple and persimmon trees in her backyard Alex started looking at the length of the garage and said, “You know…it isn’t that small, really.” With my Grandmother’s blessing we began transforming her 1905 garage into the Bitty Berkeley Bungalow that it is today. While it began its first 100+ years as a garage, the beautiful cross beams and pitched roof had so much potential and the fact that it allowed me to be close to my grandma, have a space of our own and a yard for our pups to play in was more than we could have asked for.

DID YOU IMMEDIATELY KNOW WHAT YOU WANTED TO DO WITH THE SPACE OR DID YOU GET INPUT FROM OTHERS?

One thing that ended up being a blessing was the delay in our construction, the year we built and designed the space I had to have two shoulder surgeries six months apart, from a car accident that left me rather unhelpful for long periods of time. In that time I had lots and lots and lots of time to fantasize and plan the design for the space. While my Grandmother was incredibly supportive of us being closer and trusted that I could do it, a Pinterest board definitely seemed to help her visualize how I was imagining fitting both Alex and I, and three dogs, and most of our stuff into a 10 x 20 space.

One look for tiny spaces that’s very popular right now are lofted sleeping areas, and we had a pitched room that could accommodate one. But, opting for a Murphy bed meant our dogs could all have easy access (with my version of pet stairs in the form of a vintage mid-century ottoman) with no fear of anyone falling down and our amazing (but incredibly heavy and thick tempur-pedic) mattress wouldn’t be crammed into a claustrophobic space. I knew the type of couch I wanted to create immediately, the way I wanted to use

our bed and to create a pint-sized closet/dresser next to it, and the type of vintage table I wanted.

HOW DO YOU BEGIN TRANSFORMING A SMALL SPACE LIKE THIS?

This space was a garage, but luckily didn’t have a car or hazardous materials in it for decades, so cleaning it up was less difficult and first on our list. Because this was a garage, there was a concrete floor that was on a slight incline towards the driveway, so we needed to create framing for the sub-floor and reclaimed flooring to be attached to as well as shimming and leveling the floor so that it would be flat.

The very, very, laborious process of getting the reclaimed flooring and removing the (thousands of) old nails, laying out the pattern, putting in our nails, nail-setting, filling and sanding then sealing the floors was one for the books. Next, we sanded down the beams, put in our eco-insulation, the siding and redwood boards for the (ceiling all sourced from Craigslist) and it was starting to look like a real home!

WHAT IS YOUR FAVORITE FEATURE IN YOUR HOME?

Since we did it all ourselves, and the space is so small, everything in it is so intentional. There really is something to love in every feature of our home. If I had to pick one thing, I think it would have to be the bed my dad built us.

As a bed, it’s incredibly comfortable and I can look up at the beautiful beams running above my head and snuggle Alex and our puppies. When it’s folded up I can have (and have had) friends over, an office or a studio for photo shoots or a green room for a makeup artist before a shoot. The space is amazingly transformed in any iteration.

WHAT IS YOUR FAVORITE MEMORY OF THIS PROCESS?

When we had only been sleeping here for five nights our newest rescue, Bogie, had escaped while we were in the city. We searched and waited for eight agonizingly long days and nights to find him. Because we had just moved we feared the worst, that he wouldn’t be able to find his way back to our new home. In the middle of the night I heard whimpering and asked Alex to look outside on the off chance that it was Bogie. Alex went out and was gone for several minutes. He came bursting through the door holding a wildly squirming Bogie shouting, “It’s him! Our boy is home!” After assuring me that it wasn’t a dream we blissfully bathed and fed our hungry boy. It was such a happy memory, and while it came out of a rather horrible time, it is one of our first in the new little house and it’s one we won’t soon forget!

WHAT WAS THE BIGGEST CHALLENGE?

The biggest challenge was almost certainly the flooring. We strived so hard to purchase almost nothing new (and succeeded!) for the new house and challenged ourselves to use only reclaimed building supplies. The floors seemed like a godsend at first. We quickly learned how much of a time commitment having reclaimed vintage oak floors would be. But, we love how they turned out and that they were saved from the landfill!

WHAT ADVICE CAN YOU GIVE ANYONE LOOKING TO TRANSFORM THEIR SMALL SPACE?

Don’t sacrifice! If you have the luxury of time on your hands, take it. While being bed-bound from two surgeries off and on during this process isn’t what I would call convenient or pleasant, it allowed me to really take time on the design and my vision for the space.

I was also able to edit the decor and furnishings very slowly by bringing pieces in as I found them (the pro and con of trying not to purchase anything new is that you have to wait for it to pop up). It was really difficult at times when I was looking for pieces that took longer (like the compact kitchen and mid-century teak double drop-leaf table with the four hidden chairs) not to just go to a store and buy the modern version that I could have right then, or the more expensive option that was available at the time.

By taking time, I got the pieces I really wanted, and I saved a lot of money. Lastly, don’t feel like just because you’re living in a tiny house that you have to do all built-ins and specialty furniture/pieces. I knew when I was designing the space that I wanted the space to feel like us, not change just because I had to have “tiny house” pieces. Our bed/side table is a vintage filing cabinet with pull out board that is perfect for writing on when I’m working from bed, or for watching movies on our ipad at night.

Our dining room table is beautiful, but also pulls (more than) double duty at housing our guest seating (there are four beautiful folding chairs tucked inside), being a console table, a desk when I’m working, a prop station or tool station when I’m doing a photoshoot, but its footprint is only 8in by 33 in, and best of all, it seats six comfortably which was a must for me!