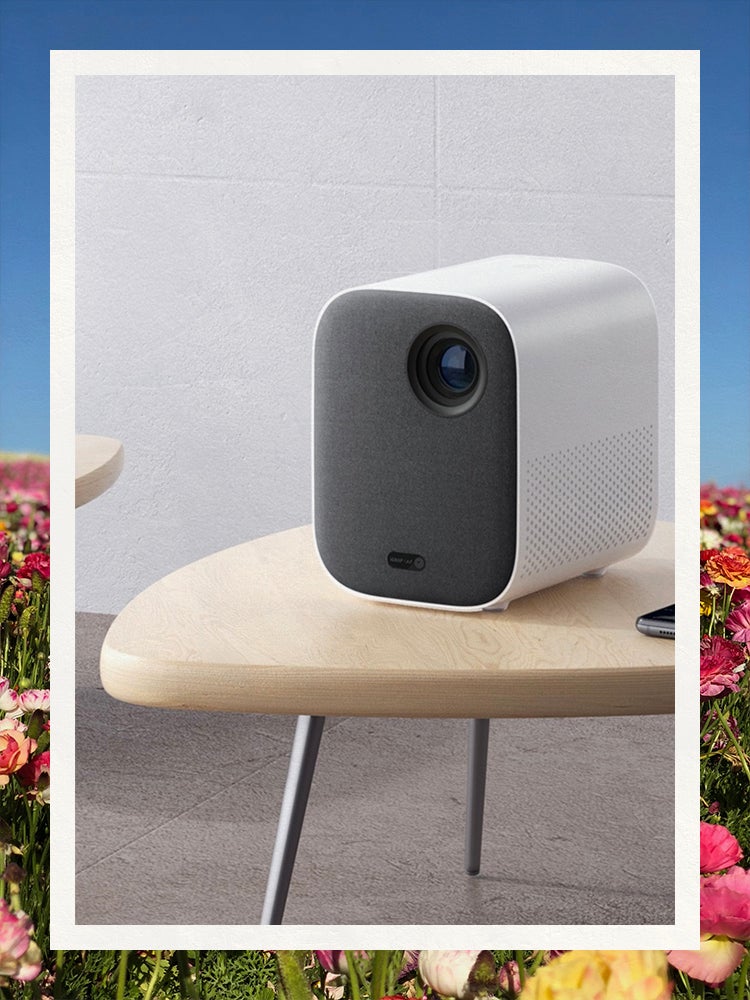 Summer brings evenings as warm as they are long. It’s the perfect time to stretch a bedsheet into a DIY screen and watch your favorite movies alfresco with friends and family. Fortunately setting up an outdoor movie theater is now easier than ever, thanks to portable all-in-one projectors like the ones we’ve gathered below. The best outdoor projectors come outfitted with built-in speakers, voice control, and a selection of movie-streaming services for a near plug-and-play experience that even the least tech savvy can operate. Just make sure no one forgets the popcorn.

Image and sound quality: Don’t fret too much about image resolution. The secret to a bright display is waiting until the sky is dark, whether the picture is projected at 4K or 1080p resolution.

Unless you’re hosting a silent movie night, nobody wants to keep asking, “What did they say?” every few minutes. Many smaller portable projectors now come equipped with built-in speakers that sound pretty good at a close distance. For larger groups spaced apart, a projector with speakers rated for an output of 10W or more is recommended. If you’re looking for even better sound, look for a projector with Bluetooth connectivity and pair it with a larger portable speaker.

Power source: If there isn’t an outdoor outlet conveniently located near where you plan to screen movie night, a rechargeable battery-powered projector is the way to go. Keep in mind that battery-operated projectors can drain down in as little as 45 minutes when set at maximum brightness. On the other hand, AC-powered plug-in projectors can last through a trilogy of films even when set at peak brightness. Just remember to run those power cords carefully to avoid bathroom break trip-ups.

Brightness: When it comes to screening outdoors, brightness is essential. Start your screening after sunset for the best experience, but know that street lamps, backyard lights, and even moonlight can all dim the picture. If you want to compete, look for a projector with a brightness rating of at least 500 lumens for smaller screens and 2,000 to 3,000 lumens for screens 100 inches or larger.

Portability: A portable projector isn’t just for backyard screenings at home; it’s great for bringing movie or game night to a friend’s house, for slideshows at the family reunion, or even while camping. The latest portable projectors can literally fit in your hand, but smaller tech often sacrifices brightness, battery life, and speaker volume.

The Verge’s Thomas Ricker calls the Horizon Pro “everything you need for home theater on the go,” and we agree. This portable plug-in projector is equipped with a LED bulb that maxes out at 2,200 lumens, powerful enough to project a picture as big as 300 inches across in full 4K resolution. More impressively, it takes out the guesswork of setup. The projector automatically focuses the picture upon startup, then resizes the output to fill the screen all the way to the edges. It even recognizes if something (or someone) gets in the way between the projector and the screen, adjusting the picture accordingly. It also allows for easy log-in to streaming services such as Apple TV+, Amazon Prime Video, Disney+, YouTube, Plex, and HBO Max (sadly, Netflix isn’t supported yet).

LG’s battery-powered 1080p projector weighs just over 2 pounds. It is slim enough to slide into a backpack and bring anywhere, yet still bright enough to fill up to a 100-inch screen for up to two and a half hours of playback. Unlike our top pick, above, there’s no AI to autofocus the picture for you, but a manual sliding lever is easy enough to manage. There’s a Bluetooth output instead of built-in speakers, plus a remote control and built-in streaming services—all without the need for a nearby outlet.

The Nebula Cosmos is a 1080p-resolution, 900-lumen projector with built-in Dolby Digital Plus 360-degree speakers that stands out as one of the best values within the portable category. It’s an all-in-one Android TV movie machine offering thousands of streaming and entertainment apps to download, but it can also connect to a laptop, Blu-ray player, mobile device, or gaming console to project a picture as large as 120 inches. And while wholly unnecessary, the subtle starry pattern that lights across the top of the projector while in use is very on theme for an outdoor movie night.

We’ll admit this projector isn’t the easiest to carry. But it delivers the best audio we’ve experienced, thanks to an integrated internal 40-watt soundbar. The very bright 3,000-lumen output is capable of projecting a 120-inch image from only a few inches away, meaning less brightness loss and much higher contrast compared to a traditional projector positioned several feet away from a screen. This close positioning also allows sound to pour out of the built-in speakers from the front rather than the side.

This little projector has served us well for the past year, both in the living room and backyard. Despite its small size, it uses some of the same AI-powered autofocusing and screen-centering magic as the larger Horizon Pro, above. There’s also a pair of built-in 5-watt speakers that delivers a surprisingly decent perimeter of sound, one capable of reaching the ears of viewers within a typical living room. The 500-lumen LED output is bright enough to fill a screen anywhere from 60 to 120 inches across in full 1080p resolution. The tiny projector comes preloaded with almost every streaming app alongside Google Assistant, which means you can ditch the remote during playback and operate it by voice alone.

This is one handsome-looking projector, thanks to a textured black and copper trim design that’s rather evocative of a certain battery brand. Good looks aren’t the only standout feature—it’s equipped with mini laser lights! Many traditional projectors use bulbs to cast a picture, but the EF-100’s laser light projection system can produce a 150-inch picture with a peak brightness of 2,000 lumens for 12,000 hours. In other words, you could watch Ingmar Bergman’s five-hour director’s cut of Fanny and Alexander every day for more than six years straight! And because it’s powered by Android TV with Google Assistant, the compact projector will dutifully follow your commands by voice while serving up TV series via Netflix, movies on HBO, sporting events on ESPN, and many other streaming services.

Do you dream of poolside movie nights? A lot of projectors are advertised for outdoor use, but the BenQ GS2 is the only one we found that is portable and splash- and drop resistant. A small built-in 4-watt speaker means you may have to paddle your floating lounge up close to catch movie dialogue. Even so, the GS2’s battery-powered design delivers a 100-inch picture with up to three hours of playback per charge at 500-lumen output—no cords or cables required.

Pro Tips for Setting Up a Backyard Movie Night

How long can an outdoor projector work continuously?

Battery-powered projectors often list two to four hours of battery life, but realistically that’s only possible when adjusted to low to medium brightness. Expect a battery life of half or even less while screening at its best and brightest setting. If your projector stays plugged in, it will run continuously without issue.

How many lumens do I need for an outdoor projector?

If you’re looking for a cinemalike experience with punchy colors and contrast, you’ll want a projector rated for 2,000 lumens or higher. Smaller portable, battery-powered models can get by with 500 to 800 lumens, but the picture will look a bit more washed out unless positioned very close to the screen (at the expense of a reduced-size picture).

How We Vetted These Products

Every product in a Domino guide meets these criteria: