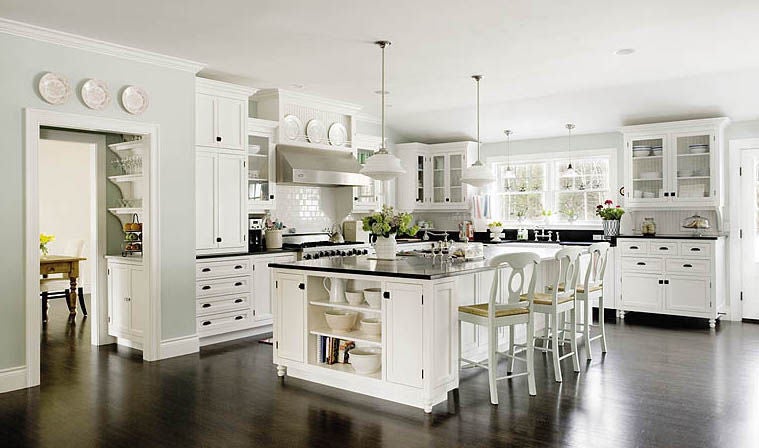 Our favorite movies and television shows number in the thousands, but our favorite decor moments are a little easier to pick out. Certain items, rooms, even paint colors stand out to us from both big and small screen alike. Here, we’ll explore some seriously stylish winners.

This is essentially the kitchen craved ’round the world. Nancy Meyers is known for infusing her films with breathtaking sets, and we’ve always had a soft spot for her kitchens. We hope Diane Keaton’s character enjoyed her Hamptons kitchen as much as we did!

The image of an Ikea catalog brought to life is one that never really left us. So much of the film took place in a crumbling house piled high with old books, we relished this moment of careful organization. And you know you still get excited when it comes in the mail. The first rule of Ikea is…hire someone else to build it!

We can’t begin to count the decor moments we fell for while “Sex and the City” was on the air. One moment in particular that tugged at our hearts was the first time we saw a ghost chair. Carrie went to lunch with Aleksandr Petrovsky’s ex wife in a posh Parisian cafe, and we’ve seen them everywhere since.

Our love of Wes Anderson wallpaper is nothing new, but we couldn’t do a roundup of film decor without including Margot’s room. It’s the dream bedroom every twentysomething girl never knew she always wanted. The Scalamandre zebra wallpaper is now iconic, and has inspired wallpaper addictions too numerous to count.

The loft featured in Ghost opened our eyes to how cool our homes were going to be when we grew up. That staircase! Those windows! Unfortunately, much like ghosts, New York apartments like these live only in the movies.

Holly Golightly’s New York apartment however, was far more attainable. We can’t imagine where we’d go about finding a bathtub sofa, but we have such fond memories of this one that it would be worth the search. Perhaps we can call this…minimalism?

Everyone had feelings about The Unisex. The location of some of the show’s most iconic scenes , The Unisex was essentially a character itself. We’re not surprised universal lavatories haven’t exactly caught on, but we certainly enjoyed this one.

A dream home brought to life, the suburban Illinois palace featured in Home Alone is almost as memorable as Kevin McCalister’s take-down of would-be intruders. This is a real house in Illinois by the way, and the interior was used in the movie as well!

Before iPhones, before FaceTime, before the internet, really…there was Cher’s closet. This was the technology we craved. This was the most coveted closet in the world. We still want this closet and can’t understand why they don’t come standard by now, but we will wait. Patiently.

We could include most of “The Brady Bunch” set, if we’re being honest, but this staircase really takes the cake. The midcentury floating stair design offers the perfect perch for a whole bunch of family members.

Another can’t-forget Nancy Meyers moment, Meryl Streep’s character in It’s Complicated  had a kitchen that gave us new life goals. Any kitchen belonging to an actual culinary professional has to be good, and this one does not disappoint.

Bonus points for encompassing the decor of an entire neighborhood. The pastel hued homes in Edward Scissorhands made us want to move to a town far, far away, (though most of the film was shot in Tampa!). We’d love to take a slow, meandering drive down this street to enjoy the exterior decor of these homes (and perhaps a shrub or two).

Okay, so it’s not a home, but the inside of “The Shop Around The Corner” was too good not to include here. It’s the kind of New York city shop you hope to find when you least expect it. The wonderful world of children’s literature was perfectly personified within the walls of Kathleen Kelly’s store.