His fireplace surround rivals the bathrooms. 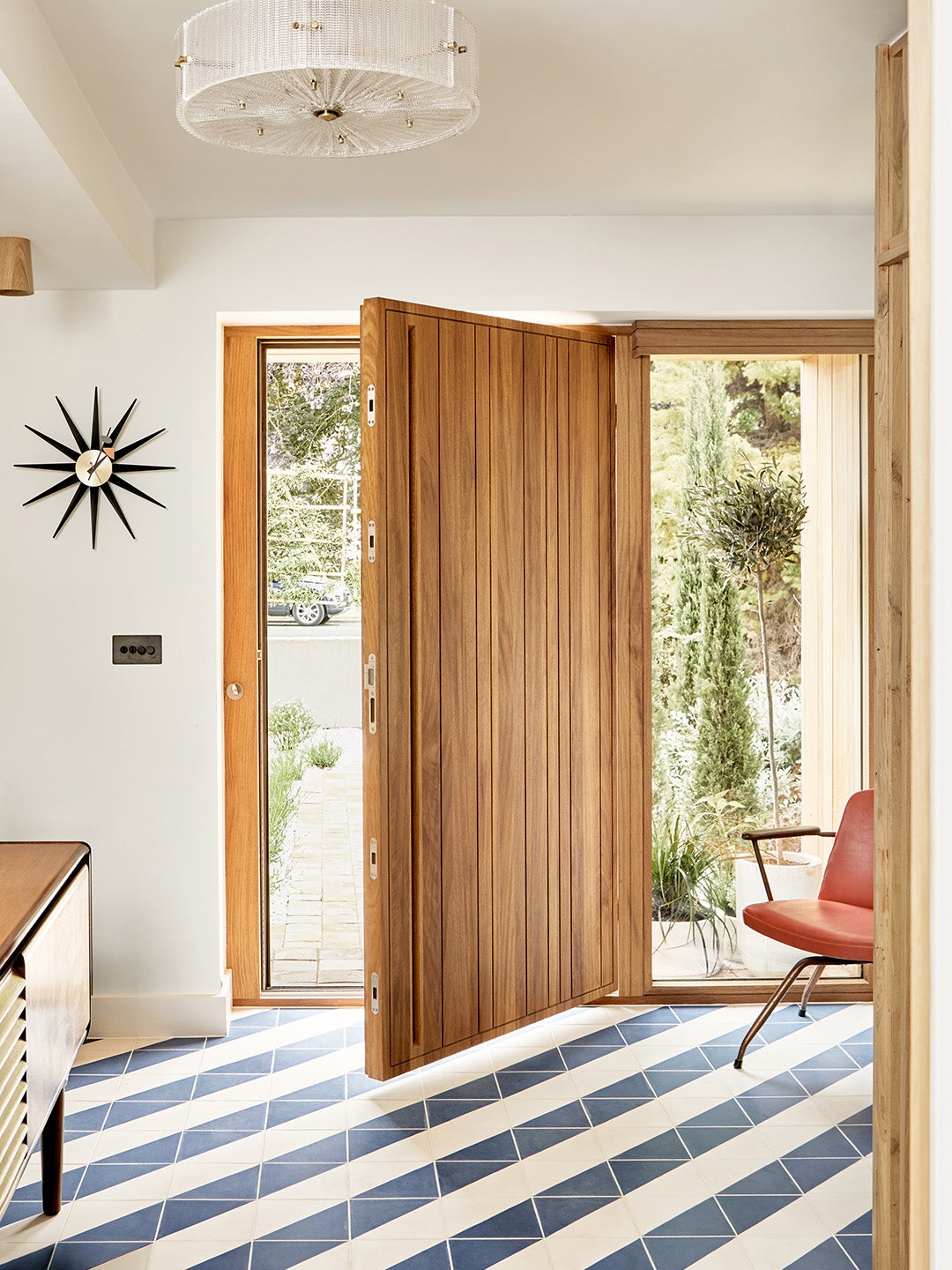 “As average as it gets” with “very basic architecture” is how Lee Thornley, the founder of tile company Bert & May, describes the 1950s house near the historic town of York, in the north of England, that he shares with his partner, Phil, and their two daughters. The property isn’t a grand one with a massive driveway, but its breezy layout, manicured lawn, and tranquil village plot signaled potential when the couple first saw the place. Having previously lived in much older properties that were packed with charm, the idea of taking on a blank canvas proved to be a selling point. “It struck me as the perfect moment to do something Scandinavian and material based,” says Thornley.

His desire was to use a neutral palette uncomplicated by heavy, dark colors, but that’s not to say the result is beige-centric and predictable. Employing the “just be brave” mantra he frequently shares with his customers, Thornley introduced pattern and texture to just about every room through his one true design love: tiles (naturally). “You create a much cooler, more interesting interior [this way] than if you play it safe all the time,” he imparts. From the showstopping striped foyer to the geometric kitchen island, Thornley takes us through each of his daring decisions.

While hallways can often feel a little dull (it’s just the place that is meant to get you from point A to point B), Thornley suggests going big and bold in transitional areas for the very fact you won’t be spending much time in them. For his own entryway, he chose his brand’s Alalpardo product in navy blue, laid diagonally to form a striking contrast against the vertical lines of the bespoke oak staircase banisters. “That was my theory, but really I just love those tiles,” he says. “The blue is very strong and creates a space that is interesting and fresh.”

Keen to carve a retreat for himself and Phil away from the bustle of family life, Thornley re-created the sanctuary of a boutique hotel in the main bedroom. (Psst: The accent wall that looks like paint is a floor-to-ceiling display of the Arch tiles from the Livingetc collection.) “We really considered what would feel luxurious and indulgent,” he says. Top of the list was a wet room, which is clad in dark gray tiling and elegant brass plumbing fixtures. The mix of hexagonal wall tiles in Old Iron and coordinating floor tiles was a happy accident, however, as he ran out of stock of the former mid-job.

To keep the kitchen from bordering on “too plain,” Thornley decided to randomly place hexagonal tiles in Bert & May’s Split style all along the base of the island, adding a dash of whimsy to the streamlined Caesarstone countertop. And no, he didn’t agonize over having the installer replicate his plans to a T: “You just have to let them [the tiler] do it and tell them not to think about it.”

Thornley’s lucky 11-year-old daughter enjoys this sophisticated bathroom, complete with an emerald green walk-in shower that seemingly glows when the sun is streaming in from the skylight. On the walls are glazed tiles from Fired Earth, laid as soldiers as opposed to on their side, contrasted with encaustic tiles on the floor. “What I really like about this space is the combination of materials,” says Thornley. “Having a busy pattern on the floor complemented by the strong gloss tiles really works.”

Hone In on Your Point of View

It was up to Thornley to add character to the house’s unremarkable walls. In the sitting room, he started with 1-inch-wide strips of wood paneling and then used inlaid Grid Line tiles to frame the wood-burner. “It’s sort of a modern Scandinavian version of a fireplace,” he explains. “I wanted to break up the cladding, as I thought it might look a bit boring.” There’s nothing average about this home anymore.