a salvaged bathroom full of ideas

Entwined pipes as faucets, old doorknobs as towel hooks and swaths of concrete bring function and attitude to this master bath. 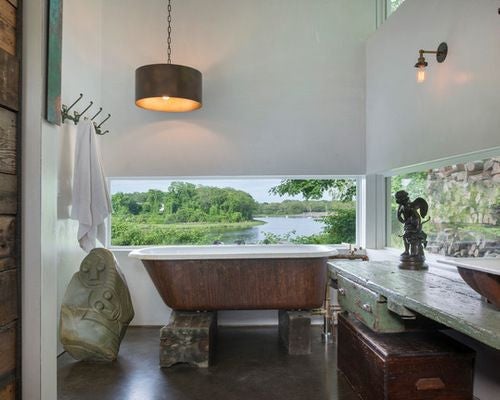 In a remodel that included a kitchen renovation, whole-house window replacement and 400-square-foot addition, it’s the private master bathroom in the addition where the designers lingered. “The bathroom is where we spent most of the time on that project,” says Adrienne Wood, who, along with husband Jason, renovated this house in East Providence, Rhode Island. “It’s such an intimate space for a couple,” Adrienne says. And given its location in this addition, it’s also a prominent one. “It’s always a feature when you walk into the bedroom.”

Bathroom at a GlanceWho uses it: A couple uses this bathroom in a master suite additionLocation: East Providence, Rhode IslandSize: 200 square feet (18.6 square meters) This renovation also realizes a new chapter in the lives of the homeowners, a couple of seven years. Although the Woods designed the bathroom, the homeowners incorporated many of their own mementos, including the sculpture next to the tub, the chest under the vanity and the angel figurine on the counter to make it their own. “They were collectors of sorts but hadn’t really collected things together,” Adrienne says. “They really built this home together.” The tub came from New England Demolition & Salvage, in New Bedford, Massachusetts, and is attached to a platform made from two reclaimed wood beams. The left beam was left long to function as a step into the extra-tall tub, which overlooks Bullock’s Cove, an inlet off the Providence River. The tops of the salvaged bathtub and the vanity align with the windowsills.  “The addition was all about the view out to the water,” Adrienne says. The low windows, 32 inches above the finished floor at the bottom and 56 inches at the top, were designed to frame the view for the bather. One window looks directly out to the water, and the other overlooks a new firewood stack that provides privacy from the neighbors.The scene evolves with the season, as the firewood is used.

The bathroom sink, also from New England Demolition & Salvage, has a custom patina, which the designers also applied to the bottom of the tub. The sink sits on an old workbench-turned-vanity.  Jason designed and installed the sink’s faucets, which are simply copper pipes, as well as the tub’s. “It was meant to be a sculptural thing,” Adrienne says. Their overlapping necks mix the hot and cold water that comes from each pipe, and reinforce the bathroom’s salvaged, functional aesthetic. The metal levers to the left and right of each faucet control each pipe independently.

Freshen Up Your Bathroom With a New Vanity

The mahogany structure next to the sink frames the shower’s entry and separates the sink area from the toilet area, creating privacy in a room without doors. “It acts as your floor mat in a way but also a screen,” Adrienne says. The same decking mahogany used here was used throughout the home’s renovation, both indoors and out. The Woods designed the space first and selected the fixtures last. “We get excited about working this way with clients,” Adrienne says. Sometimes they’ll design a room nearly all the way but leave a few details that they’ll try to find in a salvaged version, rather than design the details themselves. Such was the case with the vanity and bathtub. The architecture around both features was built, and then they found a piece to fill the space.

An old doorknob attached to the mahogany frame acts as a towel hook. “It was a very small project where a lot of these details were highly concentrated, and there were a lot of them,” Adrienne says.

Step through the mahogany frame to the shower, which projects out from the addition and features natural light on both sides. Not until you reach the shower does the full-height window on the right reveal itself. The niche on the left is a window adjacent to an outdoor shower and overlooks the water. The firewood stack, which runs parallel with the shower entry, provides privacy for this window and directs the view to the side.The window on the right is an interior piece of glass that separates the shower from the toilet.

Throughout the bathroom, but most noticeably in the shower, there’s a dominant use of concrete. “We were interested in eliminating tile in this project,” Adrienne says. In the shower, an integral concrete stain produces the green color, while an additional stain on top creates the marbled finish.

Houzz is the leading platform for home remodeling and design, providing people with everything they need to improve their homes from start to finish – online or from a mobile device. From decorating a room to building a custom home, Houzz connects millions of homeowners, home design enthusiasts and home improvement professionals across the country and around the world. With the largest residential design database in the world and a vibrant community powered by social tools, Houzz is the easiest way for people to get the design inspiration, project advice, product information and professional reviews they need to help turn ideas into reality.