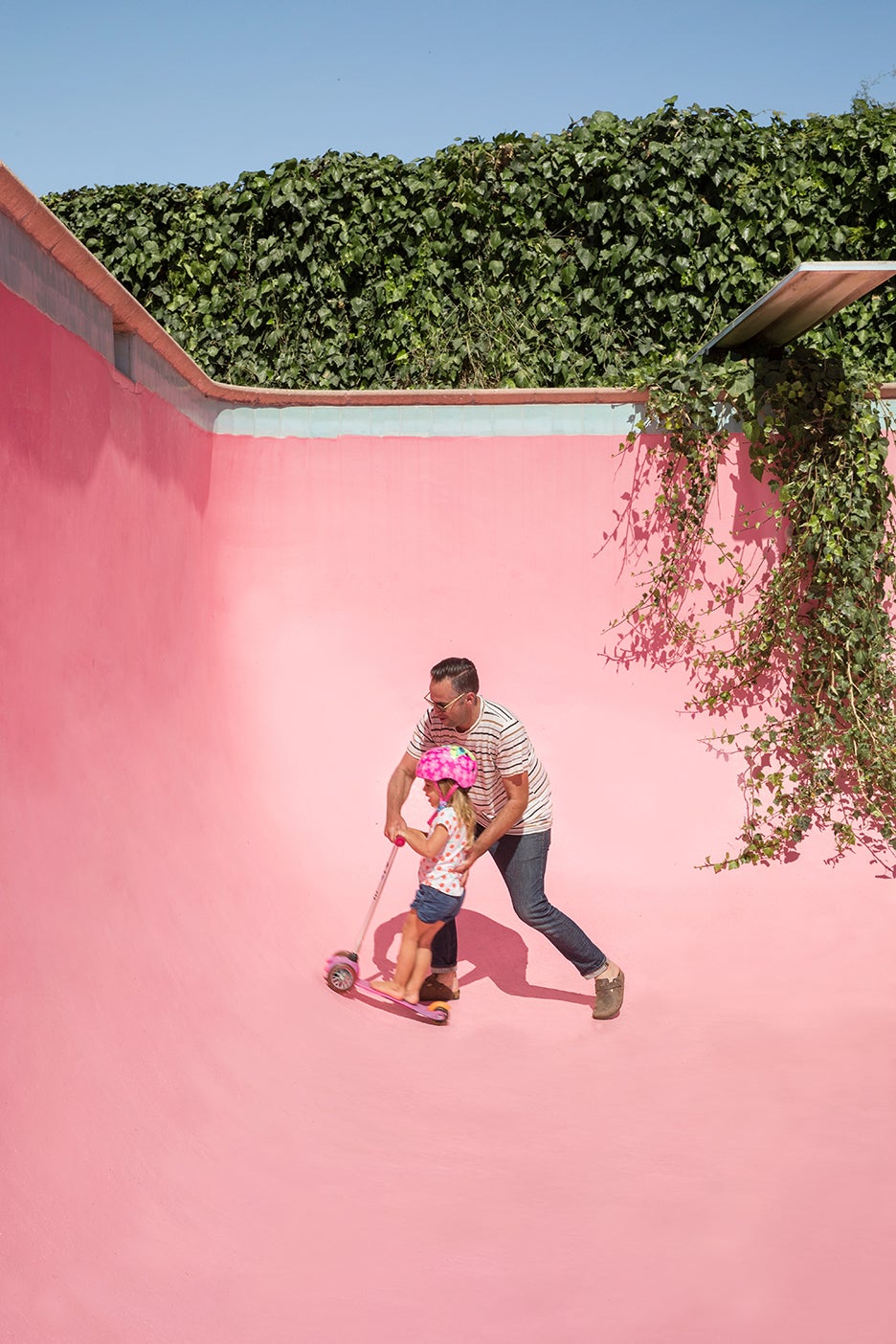 Water doesn’t flow into Amigo Modern founder Eric Trine’s pool—but verdant vines do. When the furniture designer, whose pieces you’ve probably spotted at retailers like West Elm, and his family bought their Long Beach, California, home nearly two years ago, they were told by contractors that the sought-after amenity was nothing but a big hole in the ground and it would cost $85,000 to reconstruct, repipe, and replumb it. “So one Saturday while my wife was out, I decided to paint it pink,” says Trine. Since then, he’s also let the weeds run free. “If we’ve got to look at it, we might as well make it fun,” he points out.

Instead of diving and doing cannonballs, Trine’s two daughters, 6-year-old Evie and 3-year-old Ginny, use the 10-foot-deep basin for foam parties, scootering, and jumping on the trampoline. (When Mom and Dad aren’t around to supervise, the pool is surrounded by a fence so no one can accidentally fall in.) The family of four has even gotten requests from brands to host photo shoots there. “Pro skaters have come by to test it out, but, unfortunately, it isn’t good for skating,” says the designer. Trine venturing out to the giant hole with five gallons of bubblegum pink paint wasn’t the first (or last) time he took on a backyard DIY. Here, he reveals a few other big changes he’s made to his whimsical outdoor space.

On hot summer days, the kids aren’t at a total loss. Trine scooped up a stock tank secondhand from the company that did their landscaping. To set it up, he fills the tub with hose water and drops in a chlorine filter, but he notes a proper pump only costs around $150. “My philosophy with this renovation has been DIY as much as possible,” he says. “The things that make it unique and make it ours I’ve done myself over the past year.”

Soaring sunflowers line one side of the house, where the family is in the beginning stages of growing a full-on vegetable garden. On Trine’s to-do list: build a chicken coop. “I’m preparing for my doomsday scenario,” he says, laughing. When the couple recently learned their daughters won’t be returning to school in the fall, they figured this was another way to keep them busy. “I’m thinking, How can we make this a really rich environment for other forms of education?” he says. “Let’s talk about how things grow and how to take care of things—all that homestead stuff.”

Trine’s chic outdoor firepit is another clever DIY the designer swears by. The thing is actually a washing machine drum—you know, the enamel part that spins your clothes around. Trine frequently picks up the pieces at salvage yards for this very purpose. “It’s kind of a trade secret,” he says. “I have a list of friends who are waiting for me to go again and grab some.” The perforations allow for ideal airflow, and the smoke goes straight up rather than out, so your clothes don’t end up stinking.

Trine’s backyard is essentially a testing ground for yet-to-be-released planter designs. In the past four months, he has adjusted to running his studio solo from the house while his wife is at work. “It’s never been like this for us,” he says of staying home with Evie and Ginny. “I have to make this yard work for me and my kids in a way that I hadn’t ever had to think about before.” When in need of inspiration or a well-deserved break, he can head outdoors: The bubblegum pink pool is practically an incubator for bright ideas.