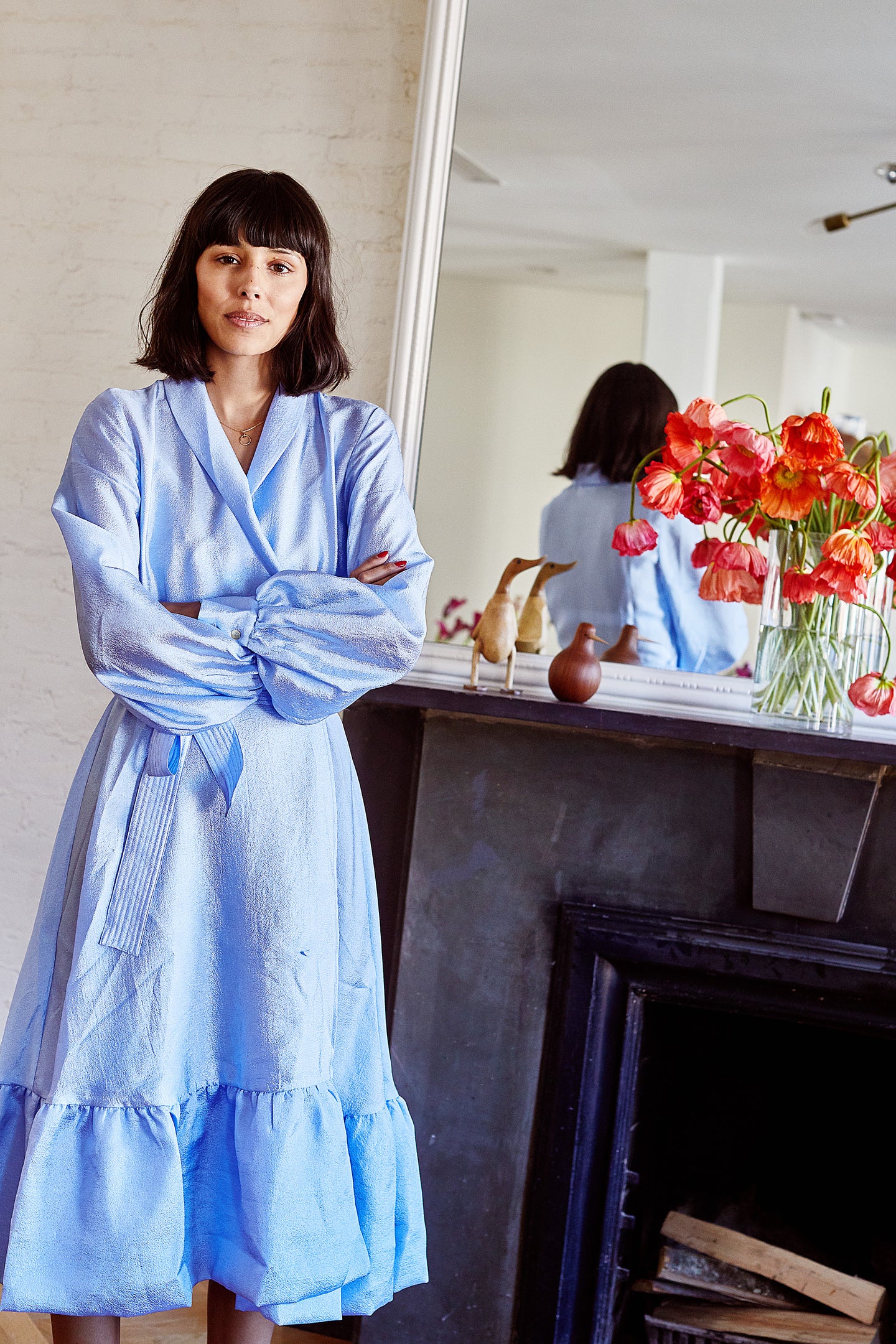 “I hate going to people’s homes where they say, ‘Be careful. Please don’t put the glass on the table,’” laughs Babba C. Rivera. “That’s not how I host. I want people to feel comfortable.” The marketing mogul and her husband, Tictail cofounder Carl W. Rivera, purchased their Brooklyn Heights home in May, and since then, they have modernized the 100-year-old space with their sleek Swedish taste.

Their Scandi-style, though, is not to be confused with minimalism. Both husband and wife have always found themselves attracted to color—Babba through fashion and Carl through graphic design—so they infused their home with a palette of calming green, lively turquoise, and the occasional pop of red and yellow. Before that, though, they had some work to do.

“We initially didn’t think we would do that much renovation because the apartment was in good condition, though it was very dark,” Babba says. “The one thing we knew we for sure wanted to redo was the kitchen, to open it up. We started renovating and ran into a few issues, and then realized the floors were drooping.” This problem presented itself as an opportunity, as the couple decided to replace the plain wooden floor in the kitchen and living room with one that features a herringbone pattern, adding a dramatic—though not distracting—element to the space.

The kitchen cabinets also provided the opportunity to have some fun. Instead of opting for a typical white, black, or natural wood hue, the couple landed on a unique, spring-like shade of green. “It feels euphoric in a way,” Babba muses. “It’s not too modern. It’s a color that could be found in an old building.” Frequent hosts to friends, the Riveras saw their kitchen as a space best suited for entertaining—an activity that, of course, also expands into the dining room.

One of several impressive custom-made moments in the apartment is a set of cane rattan chairs and a long, matching bench, which provide ample seating at a simple white dining room table. “We’ve been loving these cane chairs for years and decided to invest in them when we moved in. At the same, time we wanted to optimize hosting as many people as possible, so we decided that having a bench on one of the ends of the table was our best bet,” Babba explains. “We have this really amazing friend who is a carpenter, Benjamin Schleif, and he built a bench inspired by the design of the chairs—and then, once we completed that bench, we decided to also add a matching, custom-made bar cabinet, where we could make cocktails when we’re hosting.”

The result is a living area literally custom made for entertaining friends and family. A few techy additions from Carl, like a video projector, even sweeten the deal on movie nights. But in the rest of the space, there’s plenty of room to recharge. The bathroom was entirely redone—complete with plenty of built-in shelving—to give it a hotel-like feeling and highlight its most luxurious facet: a skylight positioned just above the showerhead.

The couple planned additional construction in their bedroom, framing an already-existing fireplace with a mirror and two new built-in closets. The most personal touch throughout the home, however, is the couple’s large, ever-changing collection of artwork, much of it sourced through Tictail. “We frame our art but don’t necessarily keep it up for very long—we rotate through it,” Babba says. “We really have a curatorial process for it.”

Above all, the couple aims to create a cozy abode where they can relax and express themselves while staying true to their roots. “We are both Swedish, so I think that speaks to the design of the apartment. We wanted something that felt Scandinavian but colorful,” Babba says. “We both like to dress colorfully and we don’t take ourselves too seriously. I have a dog and want people to bring their dogs to my home. We want it to be liveable.”

See more inspiring spaces: This Designer’s Eclectic Home Proves Black, White, and Brass Will Never Go Out of Style This Home Looks More Like a Global Bazaar Than a Brooklyn Townhouse Inside a West Village Home That Doubles as a Cabinet of Curiosities