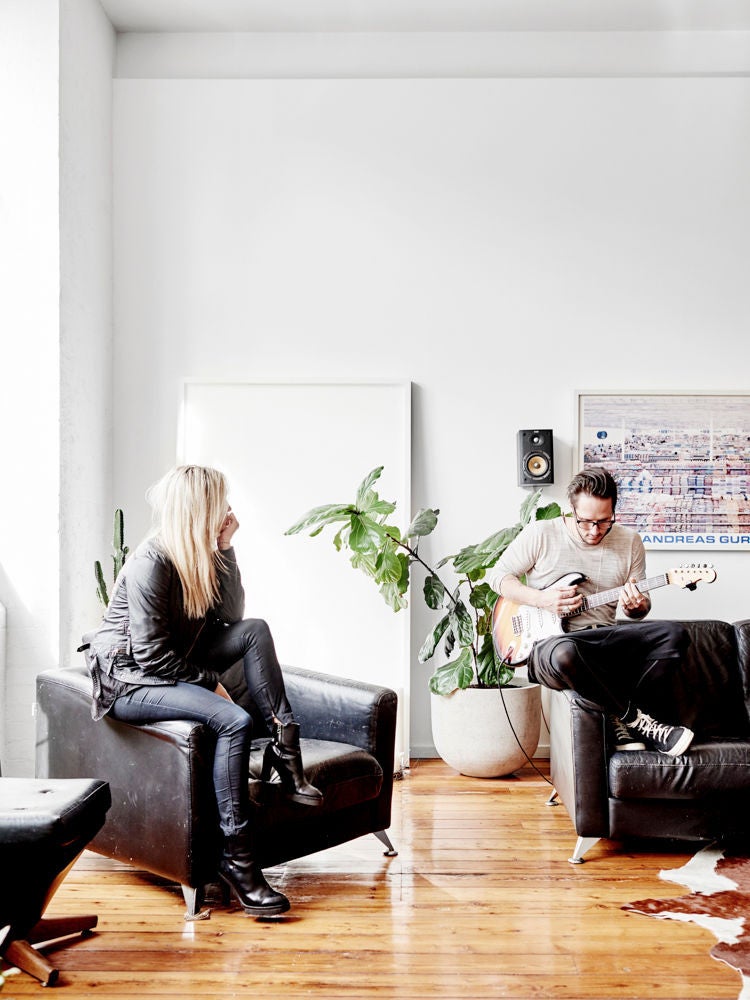 When we heard Erika Garaerts and Charl Laubscher had just finished the final touches on their Collingwood, Melbourne space at the old Foy & Gibson Factory, our curiosity was peaked to say the least. See, we weren’t just impressed that the duo managed to find the time to decorate their open plan warehouse in between running several companies—Erika is the co-founder of copywriting agency Willow & Blake and beauty brand frank while Charl is the owner and director of digital agency Love + Money. It was the fact that they designed their warehouse with no outside help that really struck us. The result? A highly-curated and minimal space that perfectly blends the warehouse’s natural elements—high ceilings, Baltic pine floorboards and exposed steel beams—with the duo’s keepsakes (including a paper-mâché Homer bust!). Read on, and discover the couple’s design philosophy and design advice.

YOU MOVED INTO YOUR CURRENT SPACE IN 2013. WHAT WAS THE SPACE LIKE WHEN YOU ARRIVED?

We managed to get the space from an illustrator that we knew. It was really bohemian. She had covered the walls with all of her art. It looked amazing, but it was very different from what we had in mind. She left and took everything. The space was kind of daunting especially because everything looked so bare and there was so much space to fill. It was so empty.

CAN YOU DESCRIBE THE RENOVATION AND DECORATION PROCESS?

There really wasn’t any planning for us. We had loose ideas on what we wanted. We started with Charl’s table and four chairs. We mostly got into the habit of going into different stores, finding pieces, and looking at each other and saying “this works.”

YOU COMPLETED THIS PROJECT WITHOUT THE HELP OF ANY DESIGNERS. CAN YOU EXPLAIN YOUR THOUGHT PROCESS WHEN TACKLING THIS PROJECT?

We didn’t have any designers come in to look at the space because I think it’s really easy to have magazines or books that you like and think “Cool, I’m just going to replicate that in my house.” But then you can come to realize that you’re not living in your apartment, you’re living in somebody else’s.

IF YOU COULD DESCRIBE YOUR SPACE IN THREE WORDS, WHAT WOULD YOU SAY?

Feels like home. We travel a lot for work. It’s a lot of fun to travel, but whatever we have going on, our space is really comfortable. When we come back, we just sit there. It’s amazing to feel like you have a home—a place just to chill out.

WHAT ARE SOME OF YOUR FAVORITE PIECES THAT YOU’VE ADDED?

The paper-mâché Homer bust that I found in California. I wound up traveling several years ago with friends, and we found this guy making paper-mâché heads. We started talking to him, and I asked if I could take a photo. This screaming 65-year-old guy in a hat covered in paint emerged from behind us and yelled at me because of my camera. He wanted me to pay to take a photo so I bought the head instead. I managed to fly around the world and got it through different airports.

We have an old boxing bag that we found in a retro vintage store near us. We don’t go vintage shopping a lot because I get overwhelmed from all the stuff that’s in the stores, but the bag had such beautiful leather. I also love our dining room table. It’s a refurbished monastery window that my dad broke immediately trying to get it inside when we moved in. We’ve restored it with a huge glass shower window since then.

WHERE DO YOU BUY PIECES FOR YOUR HOME?

We love to have “awkward dinner parties.” We’ll invite four to ten of our friends that don’t know each other. The rule is that they must each bring a bottle of wine. It’s usually small talk at the beginning, but it’s a great way to meet new people and everyone leaves with a new friend. We thought it would be nice if each person had their own chair so we’ve found different chairs from private sellers or vintage Danish stores like Modern Times, which is one of our favorite places to spend a weekend.

DO YOU HAVE ANY ADVICE FOR PEOPLE LOOKING TO REDECORATE THEIR SPACE ON THEIR OWN?

Take it by area, and focus on small parts. Less is more. Find one or two things that are going to occupy the space and then make sure that everything else fits in with them. Don’t just buy something because you need it. Wait until you find something that you really like.