In This Coastal Australian Home, the Terracotta Floors Came from an Unlikely Source

And the cabinets appear to be floating in thin air. 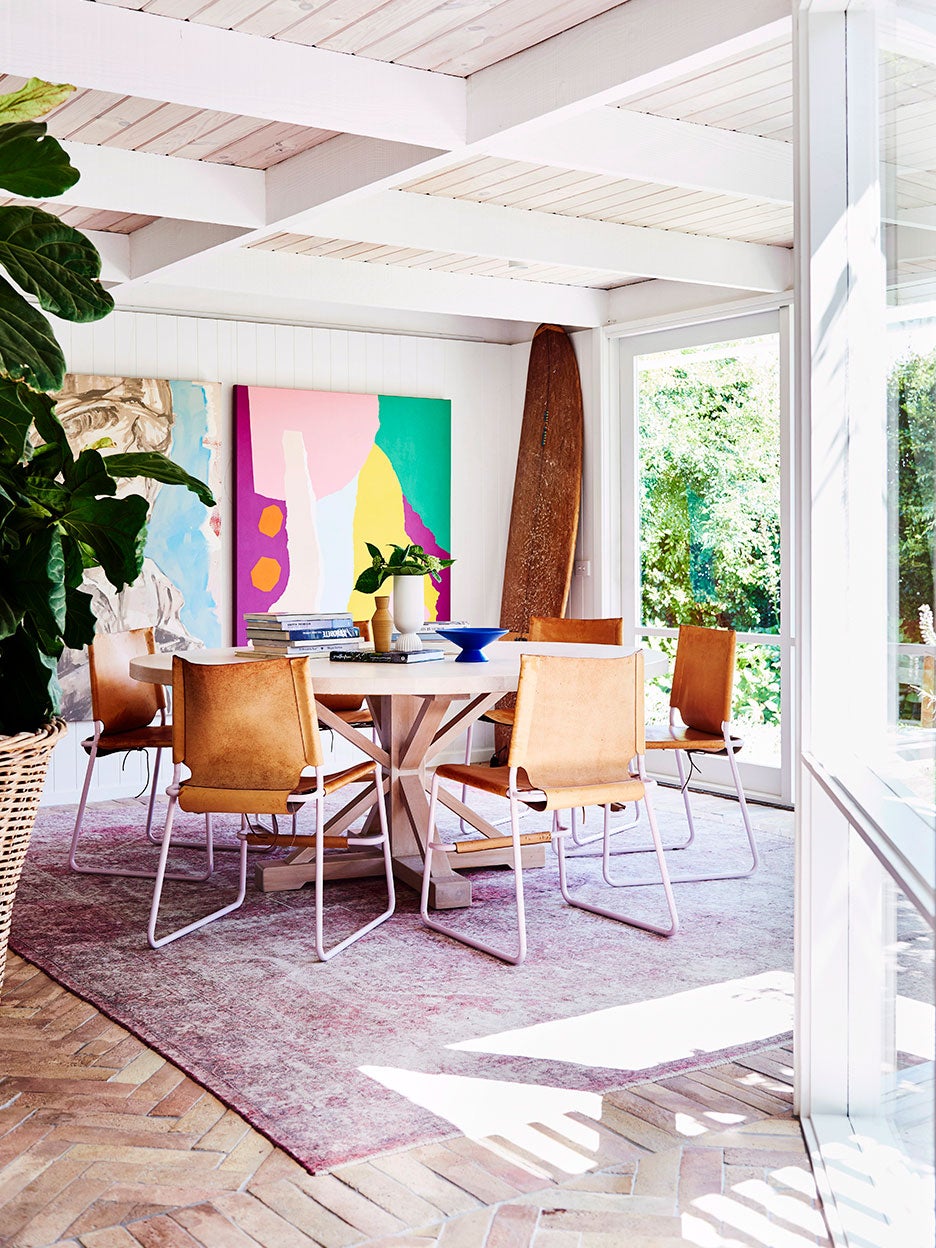 Prudence Oliveri never thought she’d end up back in the home her parents built when she was a toddler. But in a twist of fate, the day the artist and her husband, Damian, sold their last place in 2015, the 1988 brick house on Australia’s Surf Coast just happened to be on the market.

She knew the building well: It still had the limewashed ceilings her mother painted 30 years ago (her favorite feature), and the sun streamed in from the floor-to-ceiling windows just as it did when Prudence, 35, was 3 years old. “We didn’t need much convincing,” says Prudence, who put an offer in that afternoon. The dark brick walls and tiny kitchen, however, had hit their expiration date.

Before they moved in, the Oliveris got the major demo out of the way: knocking down walls between the cooking and dining areas to create a large connected space and freshening up the ’80s brick mantel with a coat of white paint and turning it into a firewood storage nook. (They had other plans for the warmth—an Oblica Shaker wood stove that complements the house’s mid-century vibes.)

Floorboards took the place of musty carpets in the bedrooms. When contractors opened up the walls to install a new hydronic heating system, Prudence took the opportunity to add wood paneling painted in bright hues throughout to complement the natural-stained ceiling. In one bedroom, she tested more than 30 shades of navy before landing on Dulux’s Deep Void. “It had to be the right balance of green, blue, and gray,” she explains.

The main bathroom’s vertical tile pattern was a mistake. Prudence arrived to find the installer already laying it out that way. But it turned out to be a happy accident—the lines give the ceiling some loft, not to mention the glossy texture brightens up the windowless space.

advertisement
“Our last home was a Brutalist construction, so we wanted a more flow-y feel this time.”

In the kitchen, beige melamine cupboards got the boot, swapped with sky-hued cabinets that appear to be floating in thin air thanks to a white steel frame. “The dusty blue is very restful and complements the greens in the garden,” says Prudence. “Our last home was a Brutalist construction, so we wanted a more flow-y feel this time.” On top, a concrete countertop made by Damian (who owns a construction business) creates contrast between glossy and matte.

Appliances are tucked away out of sight behind louvered bi-fold doors. “I throw everything behind them when guests come around,” says Prudence. The room, centrally located in the middle of the house and overlooking a leafy courtyard, is now a place for the couple to hang out with their kids, Theodore (6) and Luella (now 2), while the pups (Greta, a mini dachshund, and Humphrey, a German shorthaired pointer) roam around hoping to catch fallen snacks.

The rest of the house came together once they had settled in, with pieces collected by Prudence over time: a hand-carved Den Holm console made from Australian limestone (it even has a fossil in it!); a floral jar from her grandmother; and a crushed velvet lounge chair that makes the perfect reading nook. “It gets flooded with sunshine in the afternoon,” she says.

“The dusty blue is very restful and complements the greens in the garden.”

The European terracotta floors, however, arrived a year and a half later, when the old slate tiles started peeling up. “We were looking at outdoor pavers when we came across these roof tiles from Gather Co.,” says Prudence. Who says they couldn’t go underfoot instead of overhead? It took their contractor seven weeks, but now the pieces are laid out in an elegant herringbone pattern.

On top of the cabinets, a pot of devil’s ivy has been catching rays from nearby windows and is slowly creeping onto a central beam. “He’s very happy here,” says Prudence—as are the Oliveris.