It blends right into the fireplace. 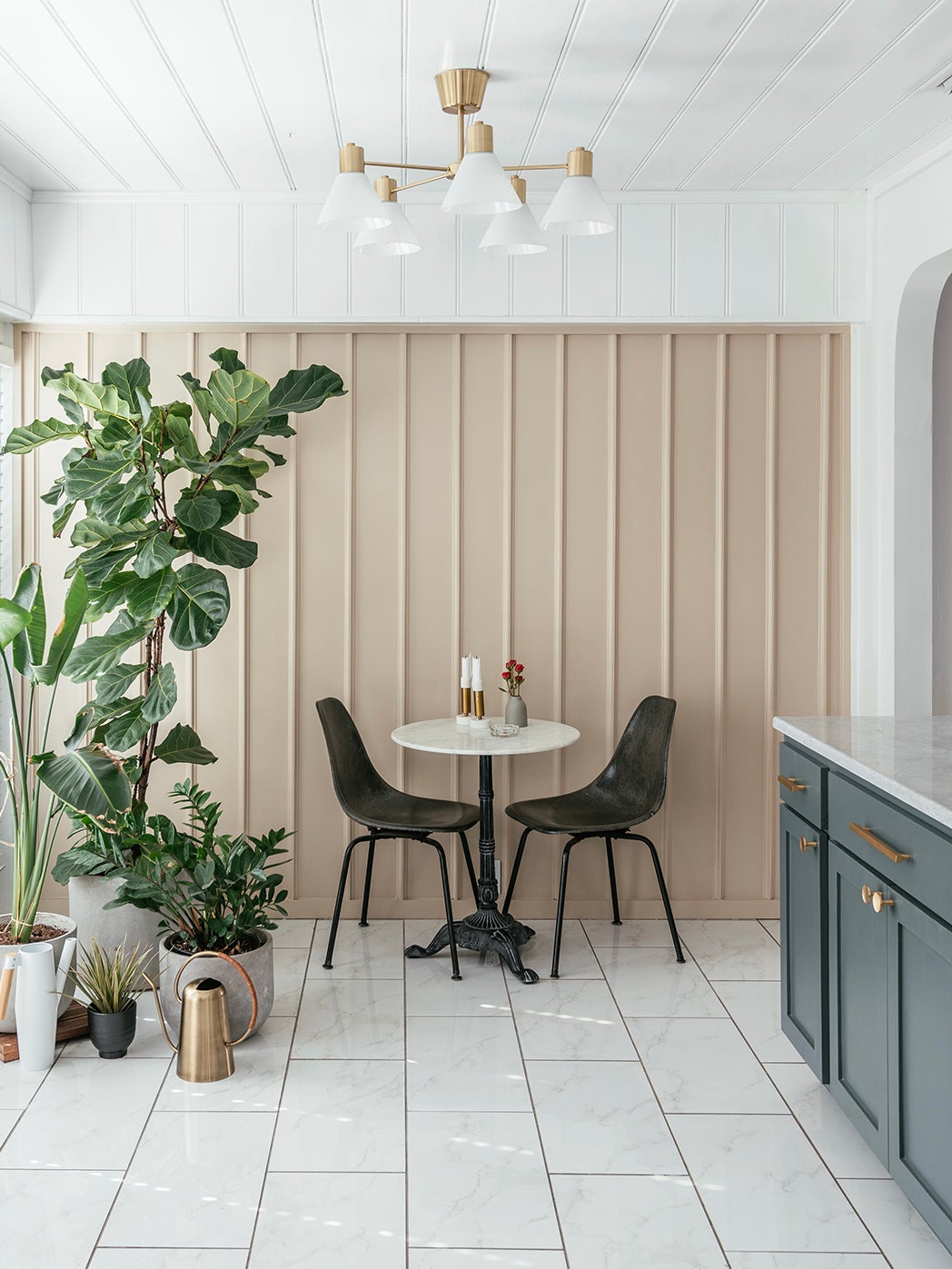 It’s not unusual to work up an appetite when you’re renovating, especially if you’ve been at a project for hours with no breaks. In Angelee and Eddie Fortuna‘s case, it must have been for dessert. After cladding their kitchen wall in plywood backing and quarter-round trim, they looked down at their can of paint and agreed it looked like a milkshake. “Thus the nickname #MilkshakeWall was born,” says Eddie. Like most of the DIYs the Dallas-based couple have taken on in their Oak Cliff home, this one was meant to infuse some of their personality into the 1,700-square-foot space without breaking the bank. “We know it’s a millennial trope and almost cringey to some degree to do a paneled feature wall, so we wanted to give ours some depth and character,” he adds.

The pair, who together run the blog His + Her in addition to their day jobs (Angelee is a digital marketing consultant; Eddie is an architectural designer), had long been itching to renovate a place. After renting downtown together for eight years, they decided to invest in a spot with more space (plus their previous neighbor’s loud dogs were starting to become a nuisance). “The wind was just blowing the right way that day,” recalls Eddie. With help from his contractor dad and plenty of fuel in the form of snacks (and perhaps a real milkshake or two), here are six more renos they’ve completed so far.

For Eddie and Angelee, the joy of moving into a house was having different rooms to retreat to. But while they are generally anti–open-concept people, there was one exception: the wall separating the cooking zone and living area. “It made the kitchen feel so isolated,” says Angelee.

To create more of a visual connection between the two spaces without compromising storage in the kitchen, they opted for a half wall and paid homage to the 1941 home’s curves with an arched opening.

The Ceiling’s the Limit

The couple painted the new cabinets on the other side of the partition blue-gray to match the rest of the lowers. The upper kitchen cabinets got a subtle glow-up: They extended them as high as they could and replaced the old glass door fronts with solid white ones so it didn’t look so “hodgepodge.” While the floors, backsplash, and counters were in good enough shape to stay, Angelee and Eddie swapped the “hideous” track lighting for recessed cans.

With help from his dad, Eddie constructed the living room built-ins at his parents’ house. Once they were at the point where they could be stacked and assembled, the couple brought them home and painted them white. The decision to go ultra-dark around the fireplace was twofold: It anchors the small space, but it also camouflages the TV when it’s turned off. “A Frame TV just wasn’t in the picture for us at the time,” says Eddie.

Bring Out the Roller

While the walls were a pretty inoffensive gray before, in some lighting they skewed purple. Luckily, the couple had the keys to the house for an entire month before their official move-in date, so they used that time wisely to turn everything white. “I got over my fear of painting ceilings through this process,” shares Eddie. He was tempted at first to leave them as is but soon realized that the shade most likely wouldn’t match the new hue they used everywhere else.

Angelee was the one who pushed for a cozy, cocoon-like bedroom. “And I’m really glad she did,” says Eddie, who is usually on the side of light and airy. Painting the newly added wainscoting black brought dimension to the room, but continuing the color around the windows had the biggest impact: It made their funky placement over the bed look more purposeful.

The Vespa was an impulse purchase following a vacation Eddie and Angelee took to Italy and Paris pre-pandemic. The cool ride served them well downtown, and it still comes in handy in the suburbs. “We’re able to zip around to our favorite coffee shops and restaurants,” says Eddie. For when it’s not in use, the couple carved out a nook in the backyard by ripping out raggedy bushes and laying down gravel and concrete pavers. We’re guessing that project got them in the mood for pasta and croissants.