The Monochromatic Bathroom Idea That Gave These Designers Their “Bingo!” Moment

Frankly, this countryside retreat is full of them. 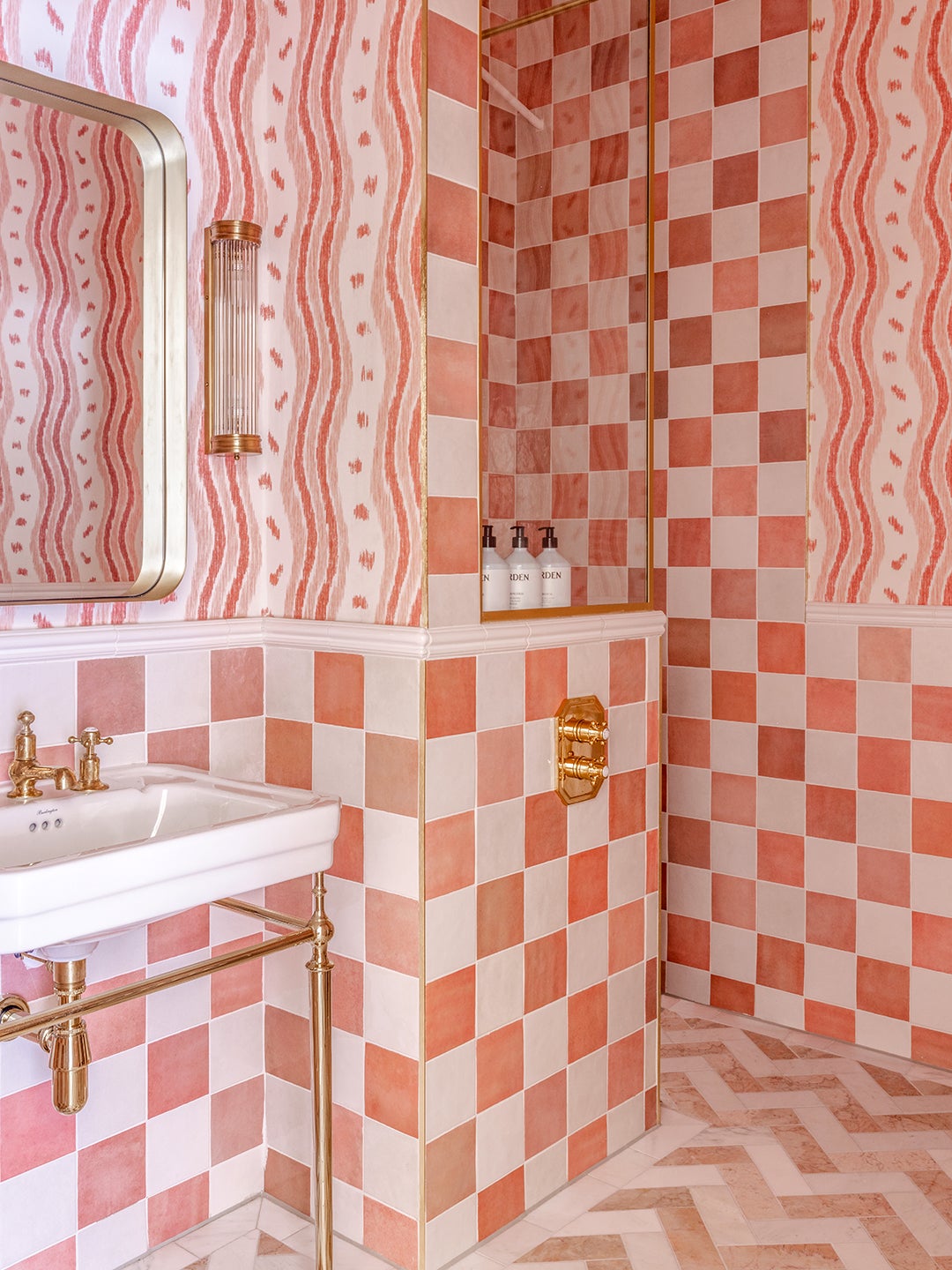 Kin House is not your average English countryside getaway. Instead of chintz wallpaper, there’s ornate wood paneling and flashes of uplifting paint colors. Where you’d expect to see a plaid sofa, there are leopard-print poufs. And you won’t find white Shaker cabinets in the kitchen, but rather velvet curtains that conceal the coffee machine and breakfast station. From the moment you enter the lobby, it’s clear: Stuffy and formal it is not.

The newly opened events space in Wiltshire wears many hats. On some days, it’s a wedding venue; on others, it’s a wellness retreat. It can also simply be a place for large groups to party in private (should sleep be on the agenda, there are a dozen luxurious bedrooms to flop out in). So it’s no wonder that when interior designer Lucy Sear-Barlow and Joshua Sear of Barlow & Barlow was given her brief, they were pretty perplexed. “It was quite polarizing—it had to be a blank enough canvas so that anyone could put their mark on it, but also memorable enough to stick in your mind,” explains London-based creative Sear-Barlow.

The Georgian manor house had great bones, so Sear-Barlow leaned into them while weaving in her signature spirited touches (note the aforementioned animal print). Her aim was to ensure a sense of timelessness with quirky backdrops for Instagrammable moments, “which obviously, in an events space, is really important,” she notes. Here are five ideas we’re stealing for our own spaces.

Choose a Theme and Run With It

Inspired by the clam pediment above the front door, Sear-Barlow embraced it as a theme throughout. Her starting point? A fabulous shell grotto. Many British country houses from the era boasted decorative structures (or follies) entirely decked in seashells in their gardens, so as a nod to history, she commissioned artist Mel Campion to embellish an existing wall niche near the downstairs powder rooms. “At weddings and parties, there’s often a photo booth, so this caters to that moment,” says Sear-Barlow. Not stopping there, she added a glass shell wall sconce and designed a custom-made clam-shaped sofa for the ultimate selfie station.

Give the Tub a Stage

“It’s almost a bit cliché,” says Sear-Barlow of placing a roll-top bath in a boutique bedroom. But as two of the principal rooms’ bay windows practically called out for one, she set about innovating the concept. Serendipitously, the designer came across a company that fabric-wraps bathtubs and chose an underwater-inspired print to continue the nautical theme. The tiled ledge the tub sits on not only combats splashes and hides all the pipework, it demarcates the wash area and elevates the bather by a few inches for a better view out of the window. Sear-Barlow echoed the checkerboard material by laying a coordinating rug underneath the room’s four-poster bed.

The study suggests that this room is a place for quiet contemplation, but really it’s a setting for intimate dinners. That’s why Sear-Barlow went with a high-gloss–paint finish: “At night, candlelight bounces off every surface and it’s very atmospheric,” she says. The designer felt just as instinctively about the room’s striking color palette, which features duck’s-egg blue on the coffered ceilings and mustard-hued walls. “The effect is very jewel box–like; it feels akin to a bougie drinking den,” she adds.

Hunt for the Perfect Pairing

While you’d expect a bathroom with two different types of tile and walls swathed in wallpaper would make your head spin, it can actually be quite harmonious when executed the right way. “The matching color combinations are actually quite calming and easy to digest,” says Sear-Barlow. Once she had settled on the wall treatment, finding the tile to go with was a relatively easy task. “That was a real ‘bingo!’ moment when we’d find a match,” she recalls.

In the case of the attic bedroom, the home’s exposed wood beams were structural and nonnegotiable. So Sear-Barlow used them to her advantage, treating them as a frame of sorts around the bed. Caked in years of dark varnish, sandblasting lightened them up, and the ironwork was left uncovered for a rustic touch. “Loft spaces are often awkward, but you just have to go with it,” she says. As with the beams propping up the grand hall where long lunches take place, they add a sense of ceremony and deserve to be celebrated, too.