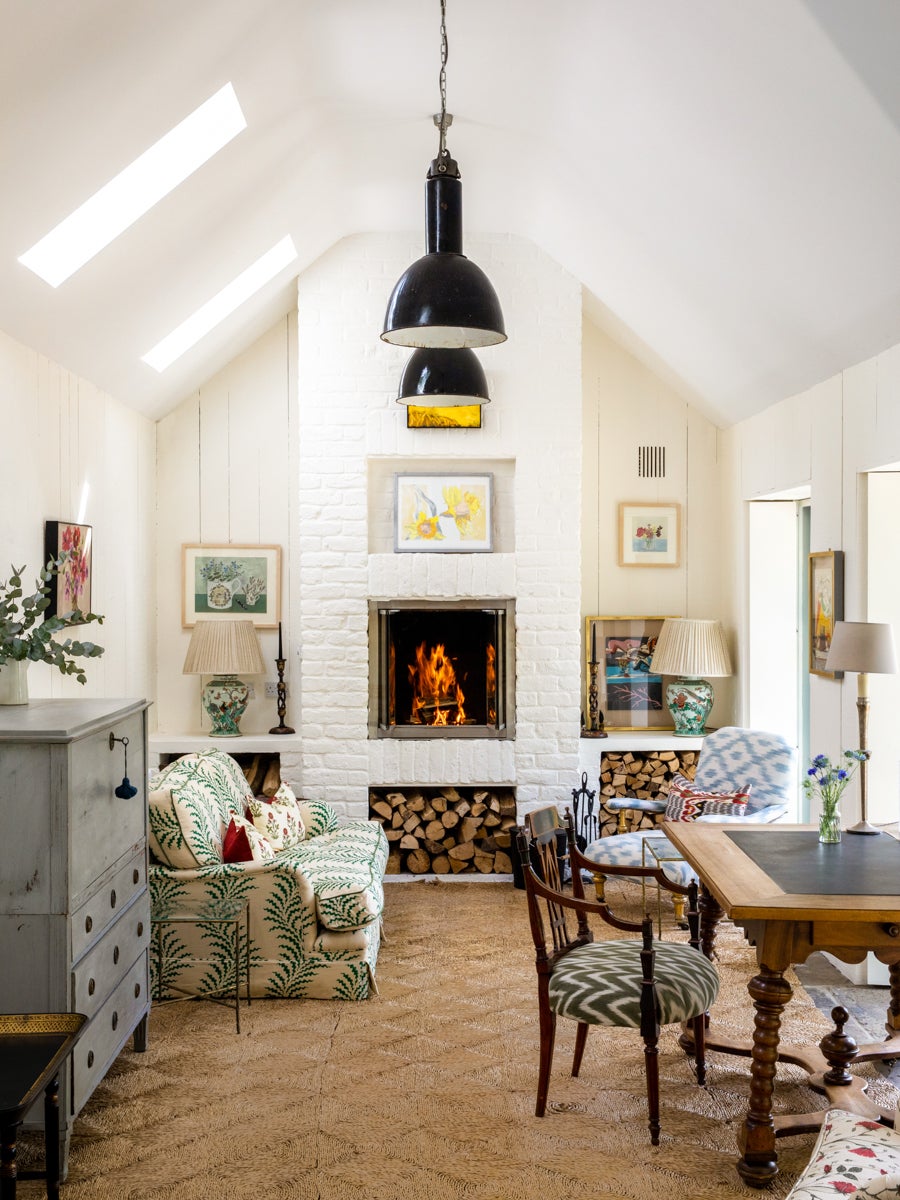 Nestled in a lush English valley that’s so picturesque it even inspired a popular memoir, Trillgate Farm is the kind of place you usually only see in fairy tales. Dating back to 1680, the country cottage, located in the sought-after Cotswolds, has it all: colossal stone fireplaces, walking trails where you happily won’t have cell phone reception, and a croquet lawn. It’s little wonder that it charmed interior designer Lucy Cunningham’s latest client, an American family looking for a quintessential farmhouse to retreat to.

Cunningham was so in tune with the owners’ tastes after working on several projects together that she was dispatched to view it even before they did. Both she and the family were united on enhancing the property’s original features, with the client’s brief specifying that nothing should look boring, “and large white spaces were a big no-no,” recalls the designer. One of the most simple but impactful changes was lining the shelves in the sitting room with a busy wallpaper. “It almost looks like a tapestry,” she shares. The high mantel on the room’s enormous fireplace provides a surface to lean artworks in an informal way, even though the soot inside the firebox is so eye-catching it doubles as an abstract painting.

The wonkiness of the centuries-old walls made it too challenging for Cunningham to use wallpaper elsewhere. But it is these types of irregularities that she thinks enchants people from across the pond in the first place: “In contrast to America, England is full of old houses in which floors aren’t straight and steep staircases make it a struggle to get up to the top bedroom.” With any sort of special treatment off the table in most rooms, she instead relied on paint, curating a soft palette of blues, pinks, and creams (all from Farrow & Ball) so as to not compete with the bucolic scenes outside.

The kitchen could have been the country moment you’d expect from such a characterful cottage, but it’s the total opposite. Since she chose to keep the existing contemporary cabinets and black stone granite countertops, Cunningham enjoyed the juxtaposition of the cleanness against the classic Cotswolds stone floor. To continue the dialogue between the old and new, she sourced an antique dresser (now used as dish storage) and a vintage dining table.

She kept the adjoining sitting room, with its pitched ceiling and trio of long French windows, airy and punctuated the space with color via ornately decorated lamps and antique chairs reupholstered in floral fabrics. “This space is all about admiring the views across the valley and reading a newspaper or doing some work at the desk after breakfast,” she explains. “A home should always feel like it can be used and never like you’re in a museum, regardless of its age.”

The family’s three children (18-year-old triplets) were catered to with rooms centered around their favorite colors but with a grown-up sensibility. “From working with this family I’ve learned that it’s so important to keep each sibling’s identity, especially as they get older,” explains Cunningham of the dynamic. The only daughter got a splash of pale pink, while one of her brothers enjoys a room swathed in shades of blue and emerald.

Up in the eaves, the other brother’s affection for purples and navy was indulged with a graphic indigo linen bed, now bathed in rays from the nearby skylight. Cunningham has fittingly dubbed the property “the house with a million views.” “Any window you look out of is breathtaking,” she notes. The same can be said for the interior, too.