Carpet tiles were also a must in the mini Picasso’s haven. 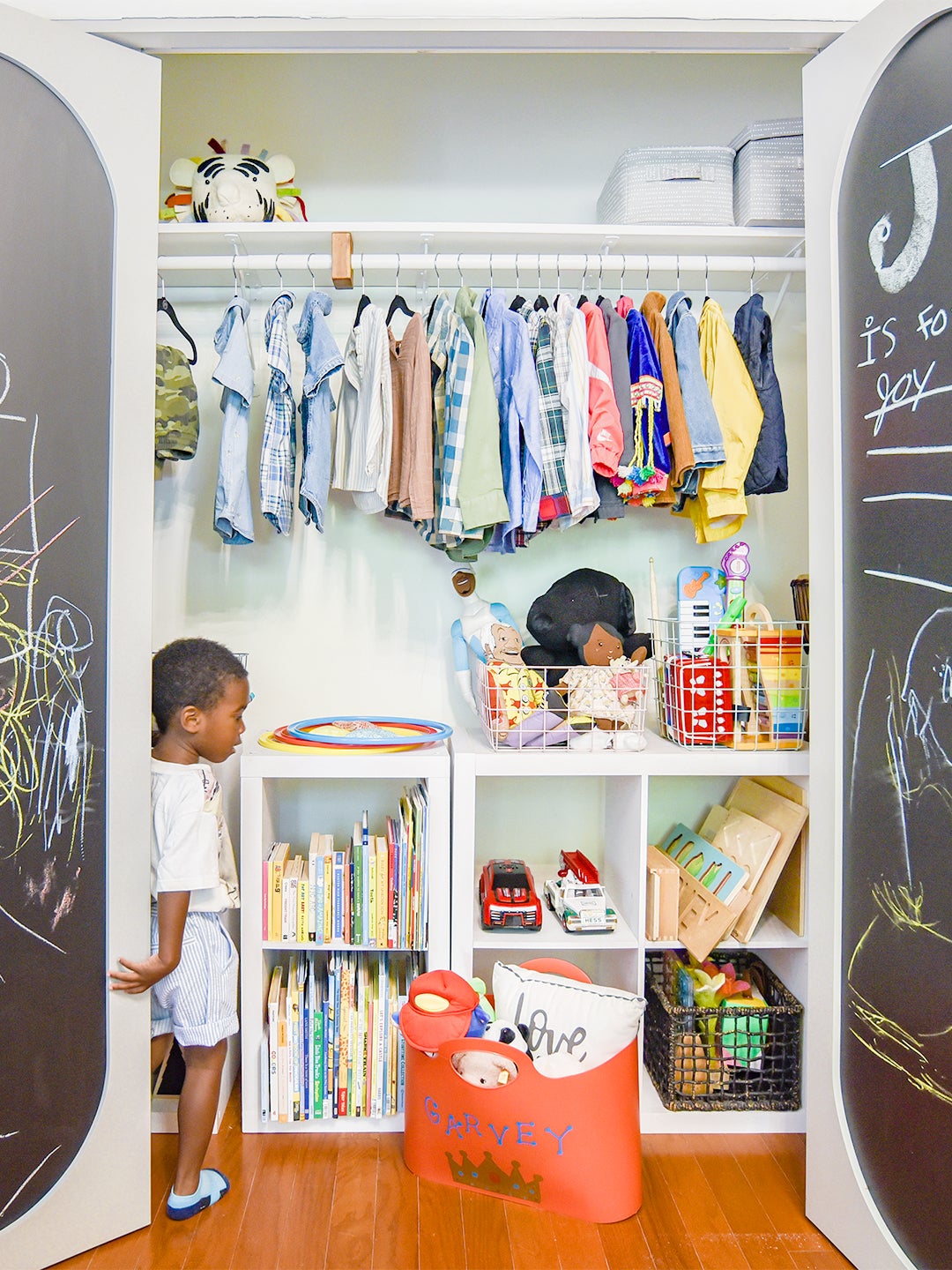 A big part of any interior designer’s job is artwork: selecting it, framing it, hanging it. But for Naïka Andre, who was recently tasked by Athens, Georgia–based couple, Nicole Taylor and Adrian Franks, to design their son Garvey’s bedroom, there’s also encouraging it. “He even has NFTs for sale,” Andre says—and she’s not kidding. The almost-3-year-old is constantly working on new creations, typically on the surfaces of dry-erase- or chalkboards (then there’s the occasional construction paper piece). While Andre didn’t have to go shopping for fancy gallery frames, the toddler’s space was in need of some clever solutions for displaying and fostering his artistic side. Ahead, the designer reveals how she turned the white box of a room into a mini Picasso’s haven, all while making the most of his former nursery furniture and decor.

While a mobile is meant to serve as a distraction over a crib or changing table, it can live on as a sculptural display. Andre had two hangings to work with from Garvey’s old space: a knitted rocket version, which she hung flat against the sliver of wall space by the door, and a modern one with delicately balanced abstract shapes, now attached to the top of his play tent. “People always think of mobiles as something for infants, but go to a museum and you’ll see them suspended everywhere. It’s a cool art installation,” says the designer.

The navy carpet has been with Garvey ever since his nursery days, mostly because it’s actually made up of individual tiles. Not only are they easy to move from room to room, and house to house (they can be pulled apart, packed up, and installed again with fresh adhesive), but they’re easy to clean. “You can pop just one square in the sink, versus having to roll it all up and take it to the cleaners,” Andre points out.

The swivel chair was also a perfect transition piece. When Garvey was an infant, he could be lulled to sleep in it. Today it’s a place where he can curl up for story time, and, most important, unlike a traditional rocker, its sturdy base prevents any accidental toe injuries from happening.

State of the Art

Because a young painter’s gallery is always in flux, Andre embraced a flexible system consisting of two simple wires with clips, so Mom and Dad can swap out Garvey’s latest works on the fly. Then there’s the live installation: the closet doors. The homeowner tasked Gus Darnell of Oneta Woodworks with making new bifold panels with chalkboard fronts so Garvey can sketch and doodle all day long. Darnell also created the special pencil-slash-brush stand that sits on top of the dresser, so he doesn’t have to rummage through a million bins to find his tools. An artist’s time is precious, after all.