The baby falls asleep looking at a lavender ceiling. 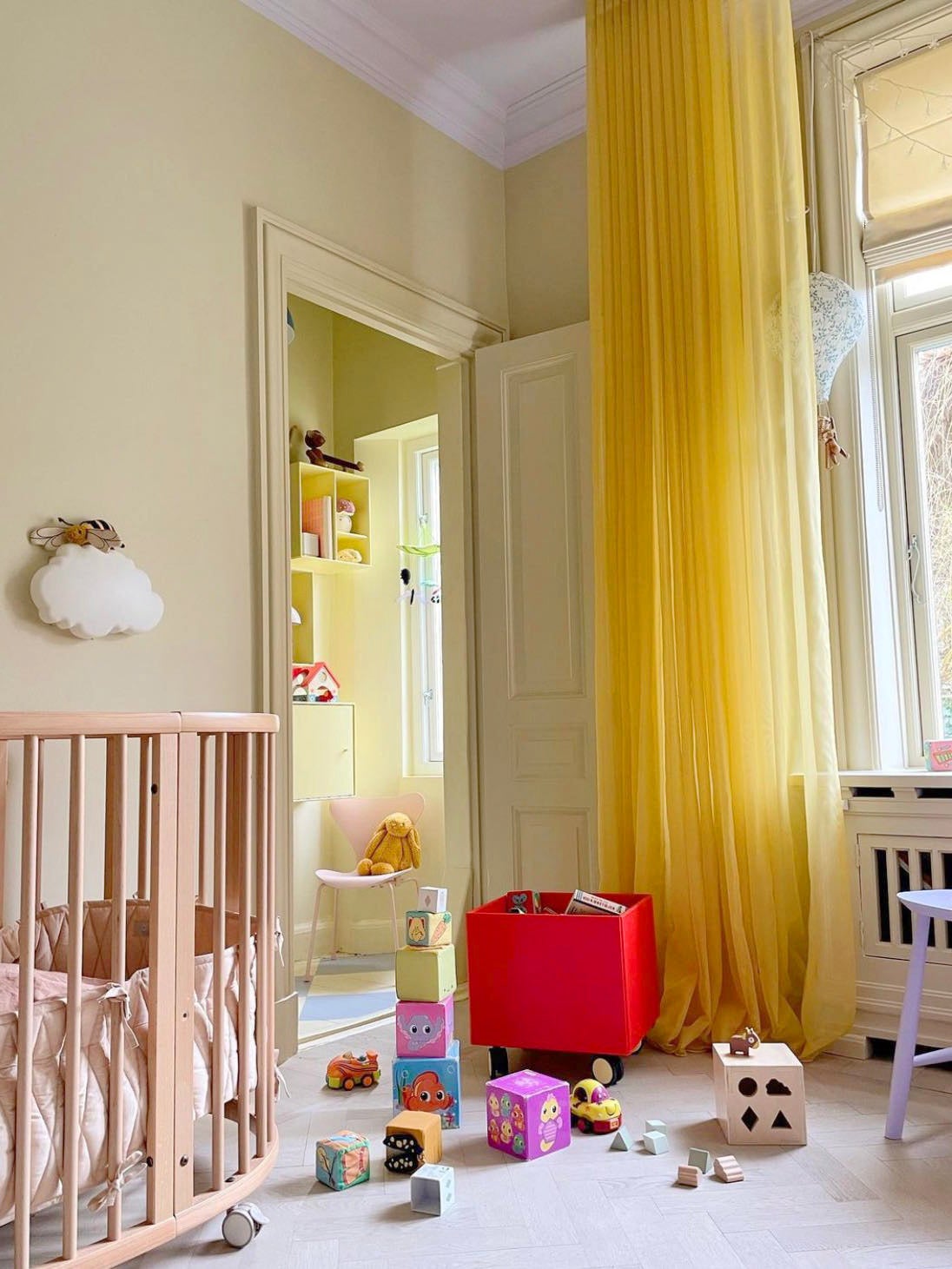 Even as a self-proclaimed “decorator with an addiction to colors,” Cathrine de Lichtenberg still follows a handful of rules. For starters, she tries to keep to only two dominant hues—be it black cherry and light pink or violet and Yves Klein Blue—per room. “Usually I pick up a color combo that gives me a certain energy and implement it,” says Lichtenberg. In her daughter Leonora’s (Leo for short) nursery, she chose a mood likened to how you feel on a perfectly sunny and 75-degree afternoon. Her shades of choice? Purple Fame and Yellow Snow by local paint brand File Under Pop. “I knew her toys would be 1,000 colors, so the calm walls were a must,” says Lichtenberg.

As the story goes with most nursery designs, Lichtenberg, the cofounder of MarmoMarmo, a company that makes customizable marble furniture and finishes, had previously used the 140-square-foot space as her office. But when she and her husband learned they were expecting their first little one, they kicked the new plan into action, brightening up the room with paint and turning the old small storage closet into a diaper-changing zone. Here are three more ideas to steal from the nursery beyond its ice cream–pastel palette.

To make the ceiling appear taller than it is, Lichtenberg hung extra-tall curtains by AndDrape from a track on the ceiling instead of a typical rod that would be positioned over the window molding. “It stretches the room,” she explains. The lemon-colored fabric isn’t the only thing that makes the nursery feel happier—the secret also lies in its gauzy texture. Light-blocking roman shades within the window frame ensure Leo can catch her z’s come nap time, but “the yellow drapes block the sun when she plays in her room without making it totally dark,” says Lichtenberg.

The dresser that contains all of Leo’s clothes and extra linens came from Montana Furniture, as did her royal blue toy chest, which is actually just the top piece of one of the brand’s planter boxes. The doorless wardrobe was a thrifted find that Lichtenberg painted the same lavender color as the ceiling (well, at least the inside). Behind Leo’s teeny hanging sweaters is a picture of Lichtenberg’s grandmother as a child, offering up an unexpected moment for connection and reflection. “Leonora’s middle name is in honor of my grandmother: Sonja,” she says.

Head in the Clouds

There’s never a dreary day in the nursery, even when it’s storming outside. Lichtenberg made sure of that by hanging puffy IKEA cloud lamps all around the crib and installing Philips Hue lightbulbs in the overhead pendant light and vintage rainbow Murano lamp that she can sync with her Spotify app. The fixtures can react and change color according to the beat of the music—er, lullaby. Rock-a-bye, baby…