Get things in writing and you’re golden. 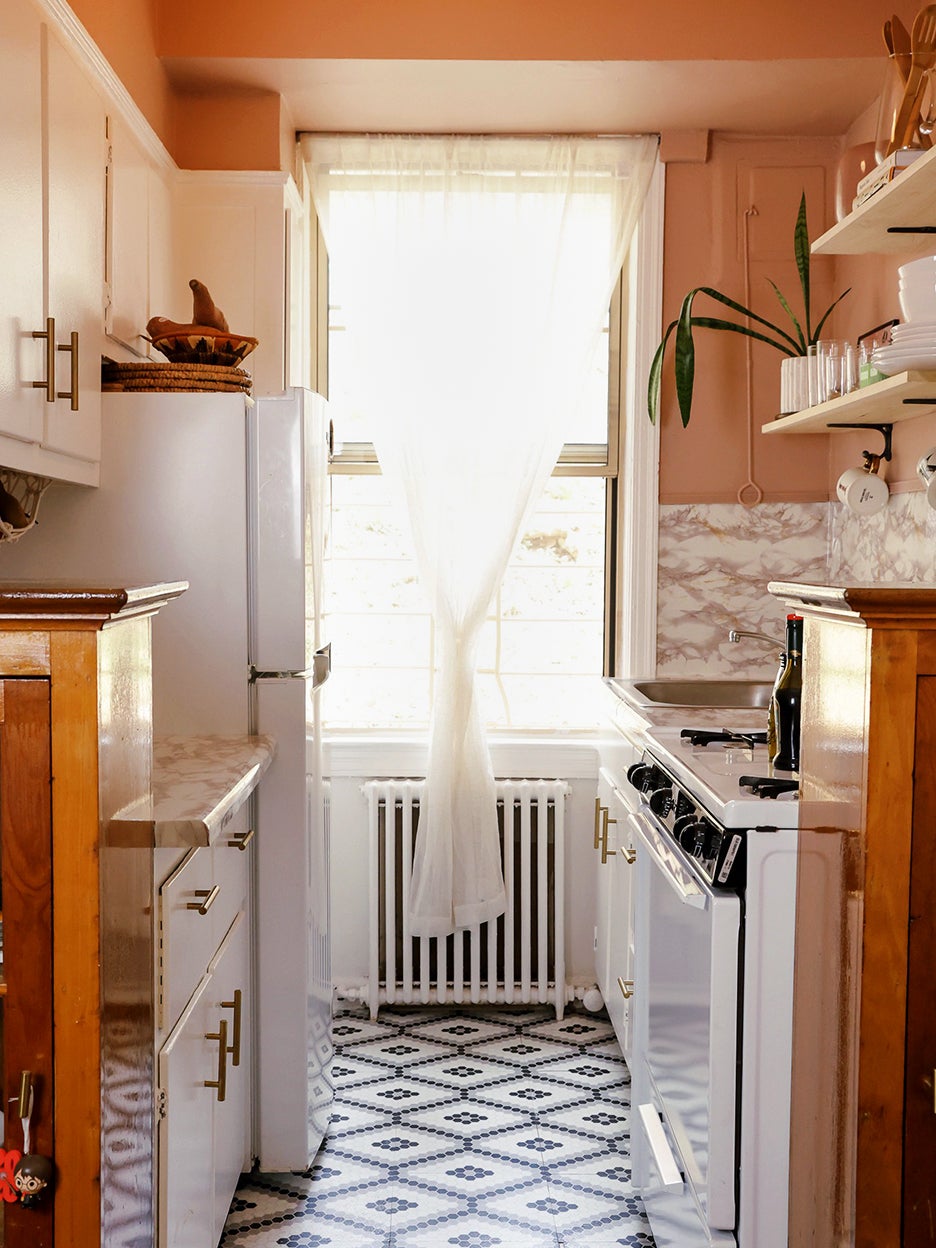 “I’m probably the only person who lives in a studio apartment where lack of storage isn’t an issue,” says Imani Keal. The two large built-ins framing either side of the entrance to her galley kitchen were what drew her to her Washington, D.C., rental in the first place back in 2019—that and the fact that it was only a 30-minute walk from her job in Georgetown. The problem was that it was just ugly. For starters, the countertops were that kind of laminate where you can never truly tell if it’s dirty or clean. Plus “it was so depressing to wash dishes at the sink and just stare at a white wall,” says Keal. It certainly didn’t look like the Joan Clayton–slash–Carrie Bradshaw–worthy apartment she had always pictured.

Fortunately, over the past two years, Keal has become accustomed to making renovations to her studio, documenting all the low-lift upgrades on her Instagram page. “I’m a very impulsive person, so when I get bored and I don’t have anything to do, I shave off my hair or paint something,” says Keal. “I don’t have any more hair to shave off, so it’s going to be paint.” The perfect shade of pink and plenty of peel-and-stick products fueled her to transform the once-blah nook.

Go All Over With Color

“I’ve always wanted a pink kitchen,” says Keal, who has come to swear by the hues in Benjamin Moore’s Historical collection (they’re the right mix of timeless and cool). To keep things feeling bright, she went with Monticello Rose—and not just on the walls but the ceiling and the breaker box in the corner, too. She was close to swathing the cabinets but thought it would be too much work to change them down the road when she moves out. “If I only had access to one thing in order to do a DIY, it would be paint,” she says. “It’s your best friend.”

Find Your Handy Helper in Tape

As a project management associate for the company Waterworks, Keal has seen a lot of different materials up close, including a stone called Plumeria that’s got a white Calacatta marble look to it with streaks of pink and purple veining strung throughout. “I have been obsessed with it,” she says. The real deal was way out of her price range, but after a quick search for purple-pink contact paper on Amazon, she came across one that looked (nearly) identical. “A smart person would have probably ordered one roll to see what it looked like, but I thought, I’ll order six and go with it,” she says. The gamble paid off: The lilac hints in the faux stone complement the wall color perfectly. “They’re like sisters,” she says.

Keal used the treatment to cover the backsplash and countertops. For the former, she notes it’s best to have a friend around to help, but if you don’t, you can always use FrogTape to hold up one side (it’s just sticky enough to support it without ruining the material). Then smooth out any air bubbles with a squeegee. Before applying it to her prep surface, she removed the existing caulk along the sink and wall, applied the paper so it went right up to the edge, and then recaulked everything to get superclean lines and ensure no water seeps through.

From a distance, the backsplash looked legitimate, but when Keal got up close to it, she could tell something was missing. “There was just this line hanging out in the middle of everything,” she says. The part where the paper met the paint needed extra definition, so she picked up some simple $4 trim, painted it in the same color as the walls, and adhered it with double-sided Gorilla Tape.

Keal can’t take credit for the peel-and-stick tile floors—that’s all her mom. “She actually used them first in my childhood bathroom,” says Keal. During a visit home, she snagged some leftovers she found stored in a box.

Keal bought sturdy poplar wood planks from her local Home Depot to add open storage on the stove side of the room and coated them in a polyurethane sealer (a dark stain would have made the room look oversaturated). The brackets that hold the pieces up also have hooks that are handy for hanging up teacups.

Ask Your Landlord for a Hand

The “worse than particleboard” cabinets were in need of a paint job, so being a big proponent of asking for what you want, Keal went to her landlord and asked them to give her a clean slate (the worst thing they can ever tell you is no). Once they were all dry, she went in and drilled new holes for the handles she scored on Amazon for $15.

Get It in Writing

“Read your lease. Read what it actually says,” is Keal’s advice to all renters out there looking to update their space. While a listing agent might say one thing during an initial tour, it might not always be what’s down on paper. “Often the lease states it has to be returned in the same state, so that doesn’t mean you can’t put a hole in the wall in order to hang a heavy mirror,” she explains. Get things in writing, then get going on your dream kitchen.

For hands-on advice from designers and pro DIYers, plus more scrappy before-and- after transformations, subscribe to Reno. Let your in-box do all the hard work—for now.