It took five tries to get the cabinet handles right. 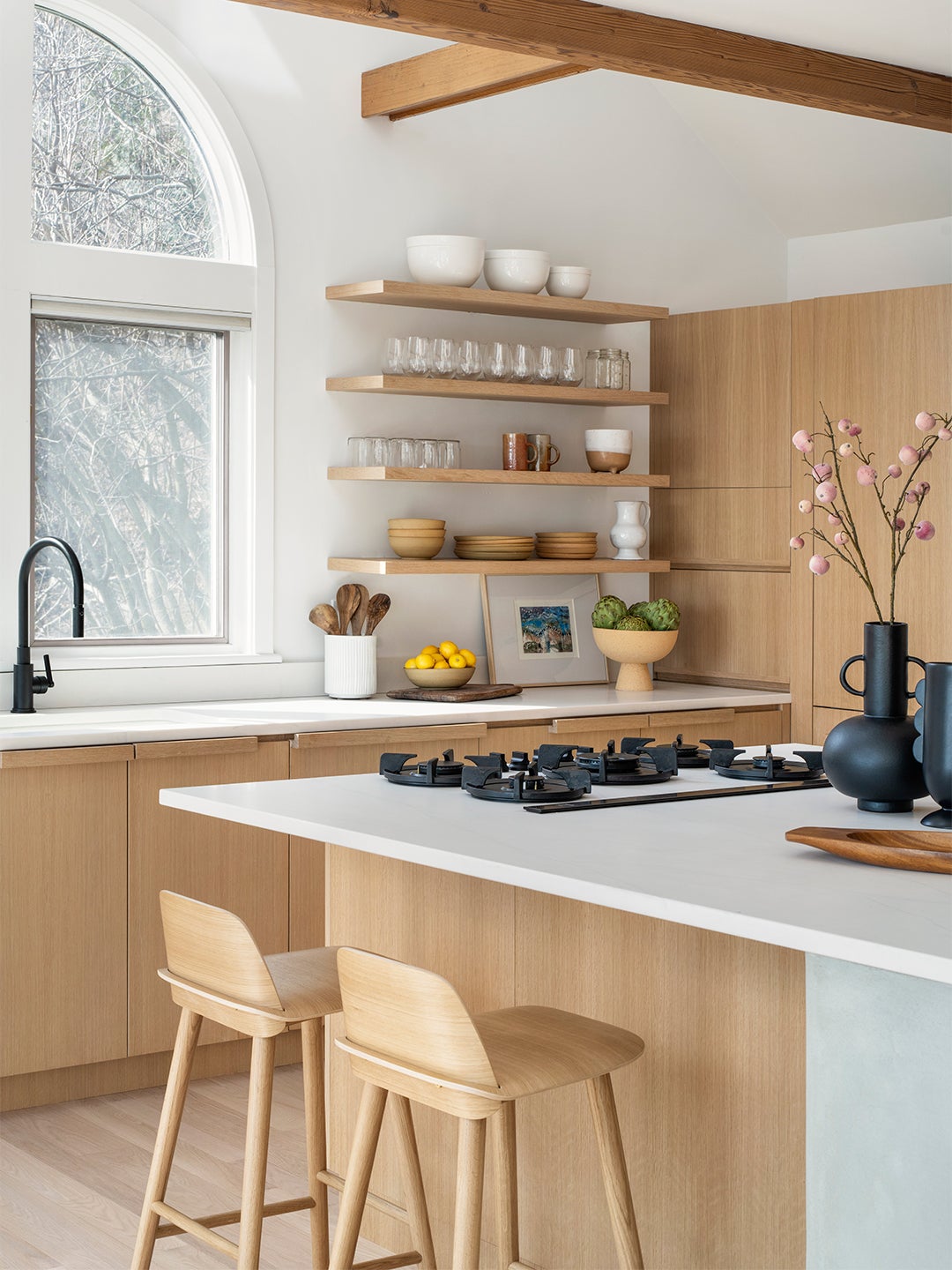 When James Veal and Christine Stucker, the married cofounders behind design firm Stewart-Schäfer, first stepped foot in a young couple’s Nyack, New York, kitchen, the pair started eyeing each other across the room. “I could tell both our brains were spinning about what it could be,” recalls Stucker. As Veal describes it, the 450-square-foot space was stuck in the 1980s—think: faux marble floor tiles, a (sort of) octagonal island, and plasticky white cabinets. “There’s good vintage, and this was not that,” adds Stucker.

Coming up with a new vision for the dated space was the easy part. The challenge: They had three months to do it. The homeowners, former Manhattanites who moved upstate in search of more space and peace and quiet, were expecting their first child. “We felt the pressure,” says Veal. “There were a few sleepless nights.” Fortunately, the couple started out their careers designing retail stores, so they know how to stick to a hard deadline. With no spare days for second-guessing, they took the space in a modern, ’60s California–meets–Japandi direction. 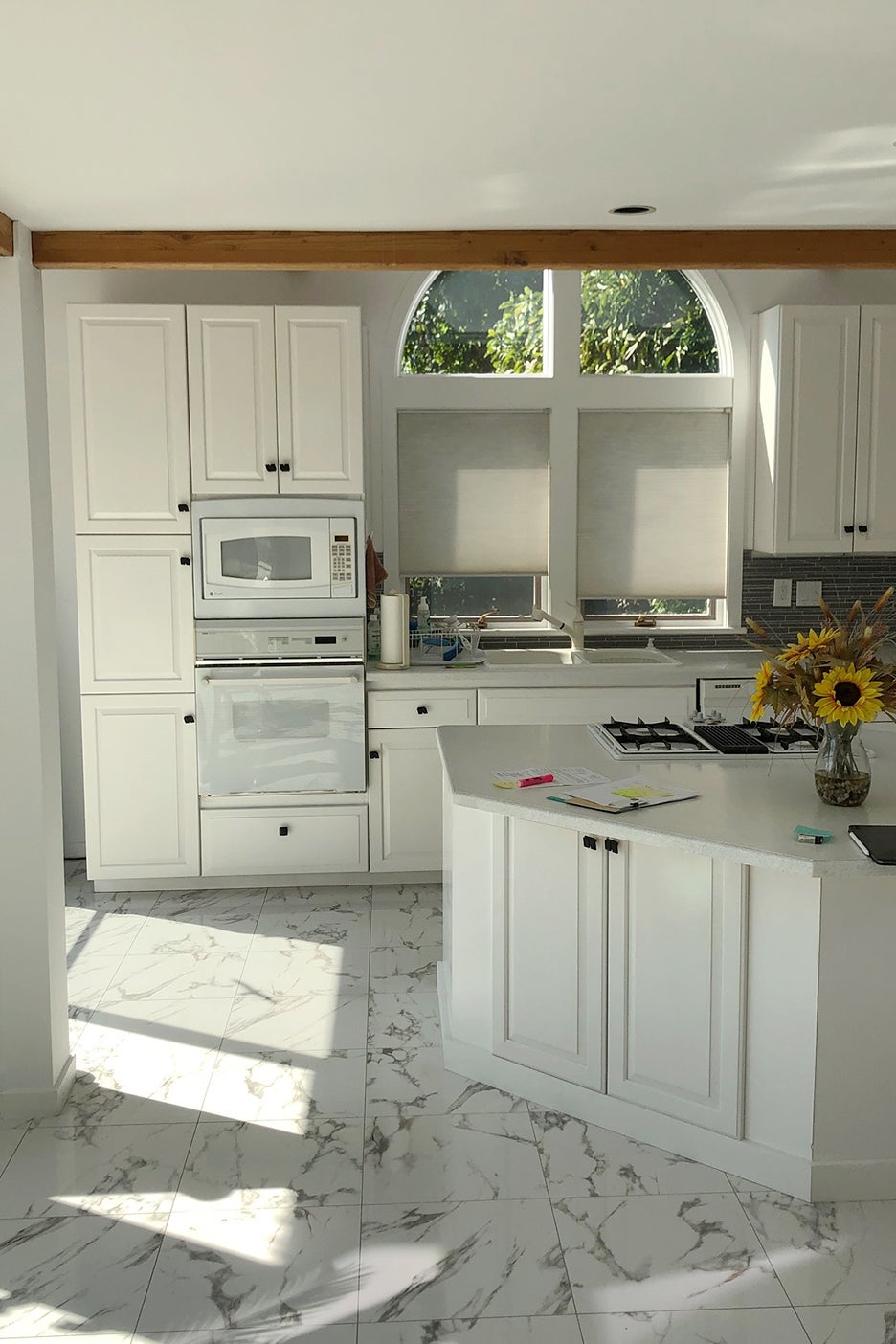 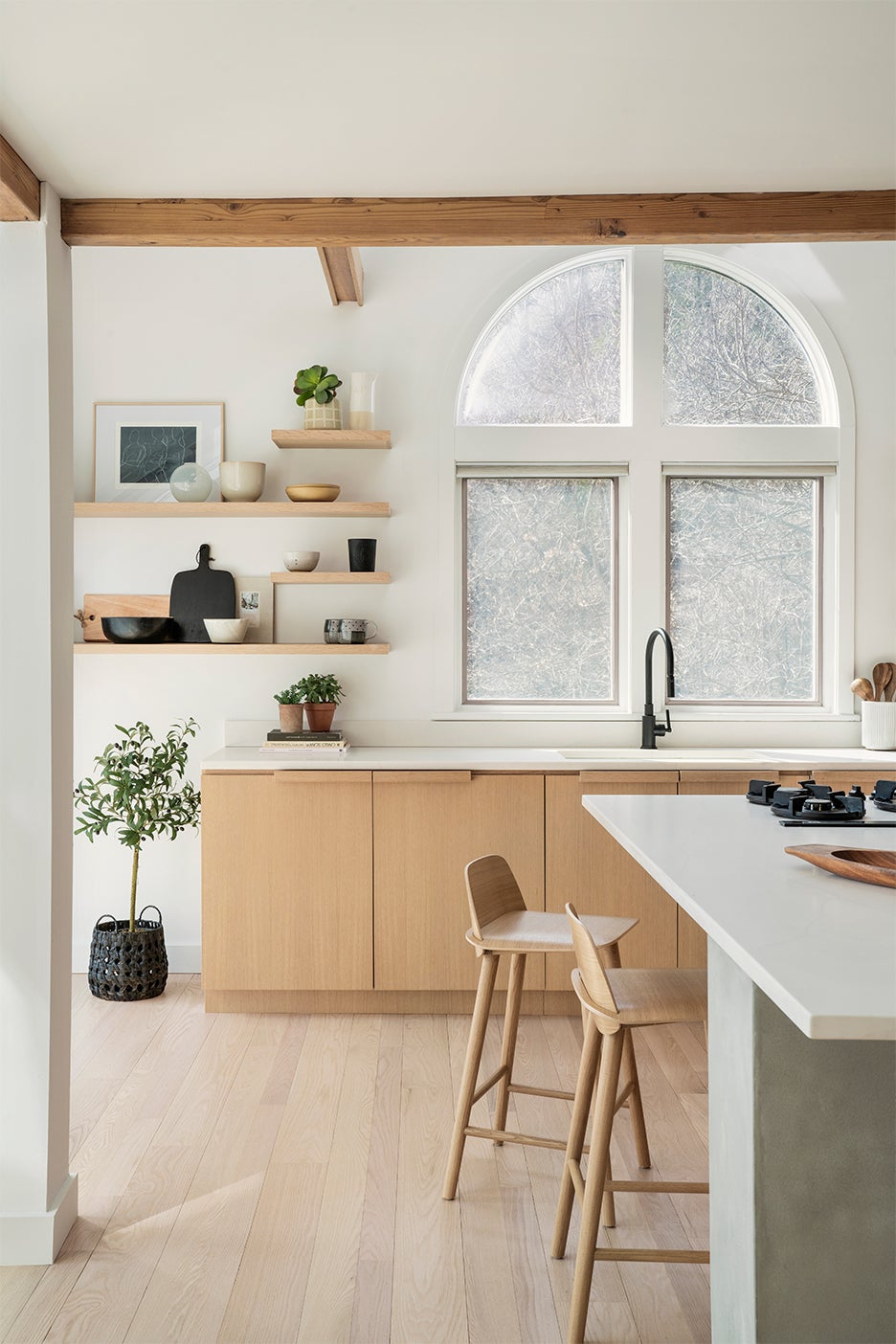 Even though the kitchen was open-concept and offered views of the adjacent living area, the layout felt disjointed thanks to the fact that the floors were mismatched (everywhere else but the kitchen was red oak). “It was a separate entity,” recalls Veal. So after refinishing the hardwood floors elsewhere to get rid of their orangey, glossy polyurethane coating, the designers matched it in the kitchen, buying fresh planks and coating everything in a white-tinted seal. Similar to salvaging some of the home’s flooring on the main level, keeping the arched window and half-wall by the back door (which ultimately creates a cozy dining nook) turned out to be budget saves. 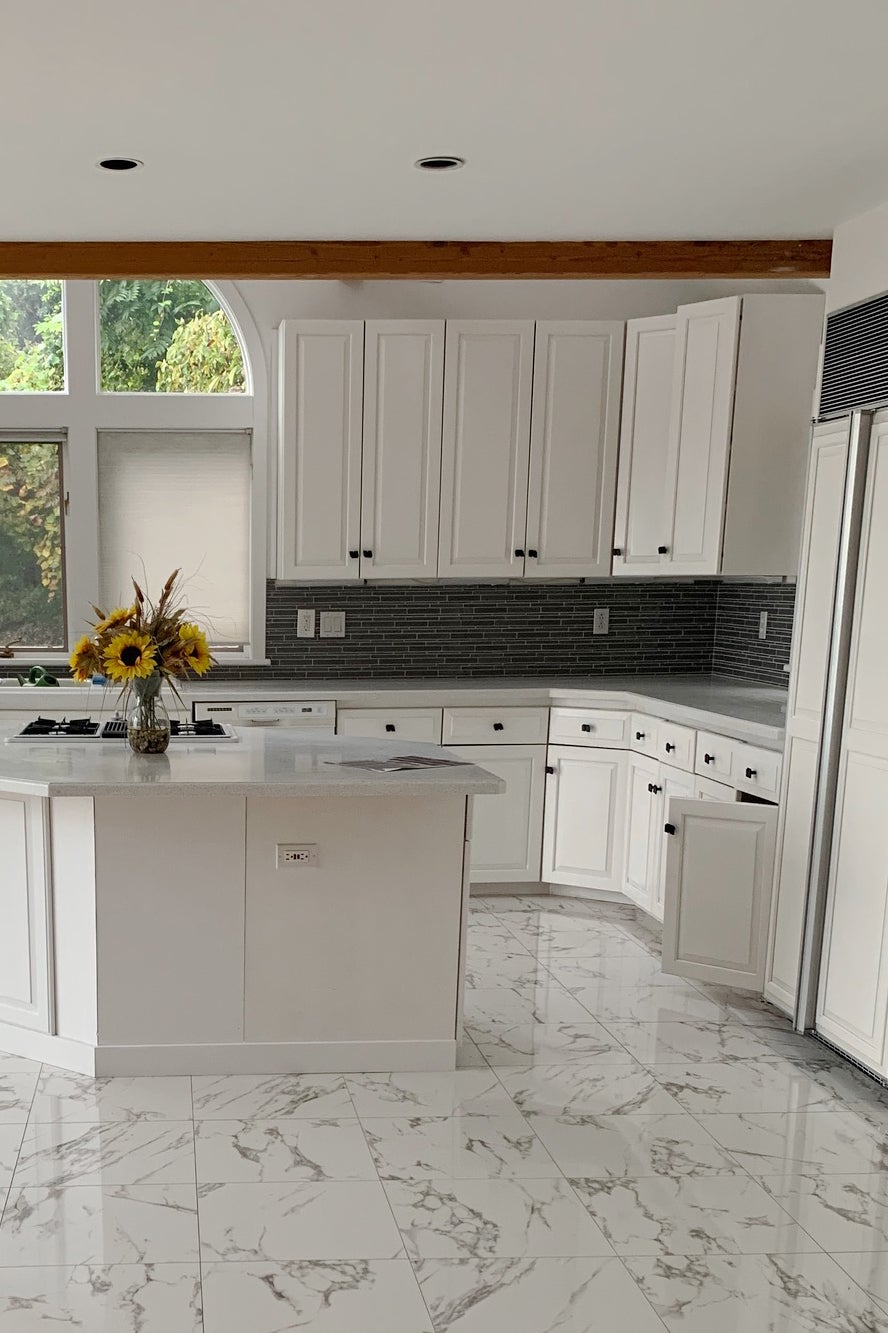 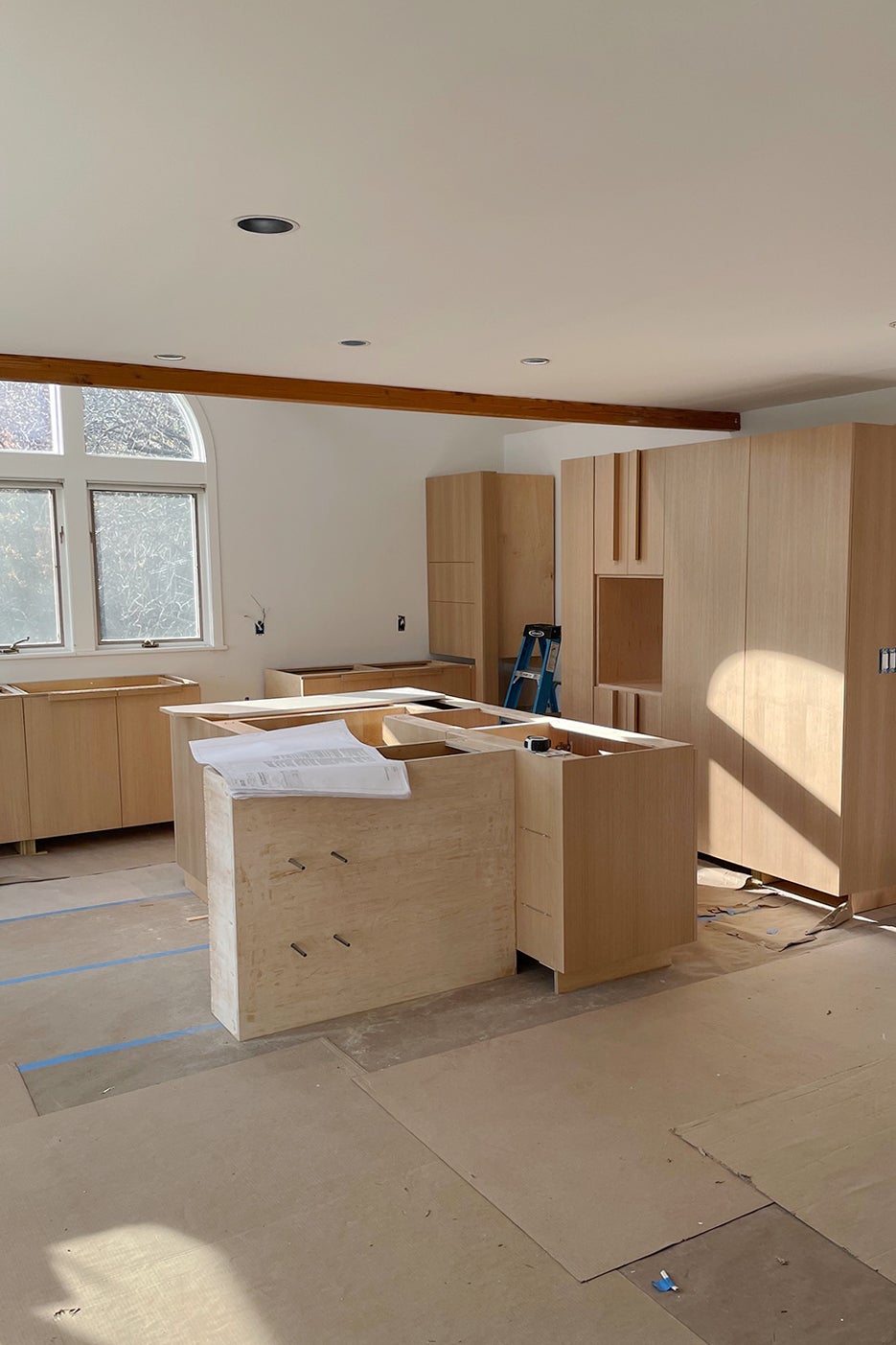 Wanting to give everything a refined look, the designers gutted the old cabinets and built custom ones out of water-based white rift oak. The wood doesn’t have a lot of movement in the grain, notes Veal, which is just what they needed to achieve that cleaned-up appearance (plus their fabricator matched up the grain on all the doors so it reads as cohesive). To ensure the doors can withstand heavy usage, the designers finish the fronts in their go-to (top-secret) finish, sourced from Germany, that promises nothing will fade over time.

Get a Grip on Things

Unless they’re designing an English-inspired or traditional kitchen, Stucker and Veal steer clear of metal knobs and embrace a more seamless, integrated look for the hardware. A prime example: The bulky oakwood pulls, pictured above. It took five (!) mocks before they landed on them. “They’re very ergonomic,” says Veal, who continued to tweak the dimensions so they were comfortable for both adult hands and little fingers to grasp. Elongated handles on the tall cabinet doors helps break up the monotony of all the wood. “It’s another thing that your eye can follow,” he notes.

Partner Up With Unexpected Materials

Speaking of everything being intuitive and seamless, Veal’s rule of thumb for any kitchen layout is that all the essentials (sink, cooktop, fridge) should be within a 7-foot radius. So situating the cooktop within the island meant they could achieve the ease and functionality they were after, plus the integrated burners don’t disrupt the zen aesthetic the same way a bulky metal range might.

The island is topped with quartz (Stucker swears by a product called Lincoln that’s got light hints of dove gray veining) and features a base made of wood and concrete. The designers’ direction to the millworker was to make the structure a quarter inch smaller than the plans, that way they could bring in someone to skim coat the side in concrete. “It’s kind of the glue that holds up the stone and makes it feel more like a piece of furniture,” says Stucker. The combo will never get old.