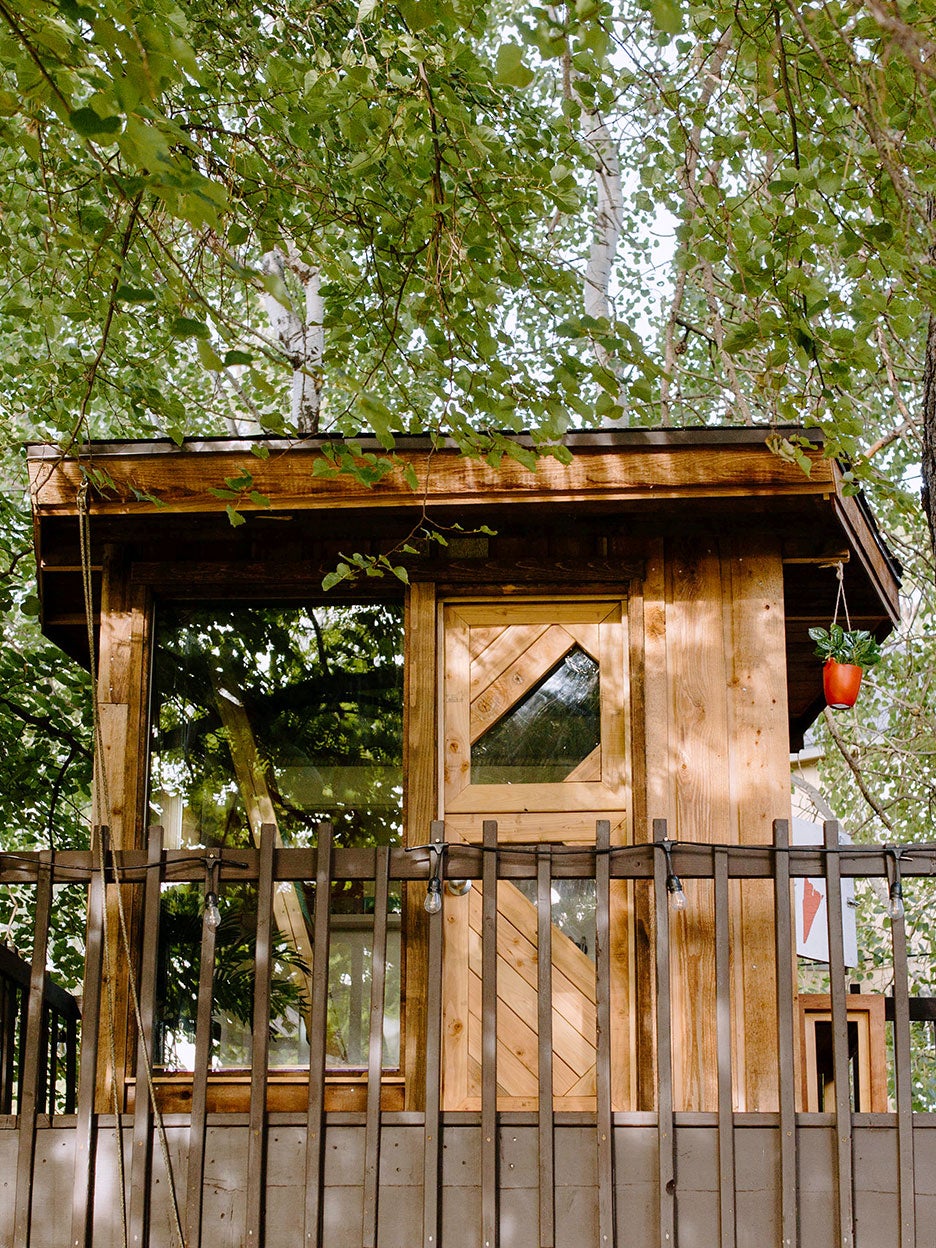 Chelsey Nilson had a bathroom remodel on the brain this spring, but when she realized her three kids (ages 8, 5, and 2) would be home from school for a while, her reno plans were put on pause. Instead she and her family built a treehouse in their Washington State backyard. “My husband and my oldest son came up with the structure, a mini version of our own home,” says Nilson. The sloped roofline and large-scale corner windows resemble their 1964 split-level.

While some of the kids’ must-haves (a basketball hoop, a Barbie house) weren’t doable, Nilson found other ways for the little ones to play a pivotal role in the design. In the end, each child got to choose a color they wanted to see in the space, and it was up to her to weave the hues (teal, light purple, and orange) together. They even had the final say on the floor design. “Whenever we’re creating a space for them, I want to make sure they have their own reflection, their own voice, in it,” says Nilson. The construction, however, was an adult-only undertaking, with Nilson’s husband tackling the framing and roofing solo after practically clearing out the sale lumber section at The Home Depot. Four weeks and roughly $1,500 later, their kids have a magical playground where they, and their imaginations, can run free.

After ripping out several bushes around the pine tree, the couple poured the concrete footings for the four posts that would hold the base of the structure, working around a nearby cherry tree with roots “the size of boulders.” “We didn’t want to kill any trees, especially the one holding up the house,” says Nilson. The support beams and decking (roughly 7-and-a-half feet off the ground) went up after that, followed by the mini house made out of particleboard. The building process wasn’t totally seamless: Nilson’s husband had to cut the treehouse’s framing down at one point after realizing it was a foot too tall.

Most of the wood used for the interior was left over from a separate cabin remodel the couple is working on on the side, as were the glass windows. “They’ll be plexiglass one day,” says Nilson with a laugh, noting that her kids have already broken a window in their main home and that it’s bound to happen in the treehouse. “I have a big plant sitting in front of one of them as a buffer.”

Nilson discovered exactly why cargo nets cost hundreds of dollars when she decided to make her own for $40. “I probably redid it three times,” she recalls—it’s difficult to gauge just how much rope you need. The finished feature is a huge hit with her youngest child, who isn’t quite big enough to climb up and down the ladder.

Her eldest, on the other hand, loves exploring the deck that wraps around three sides of the house. Tomatoes and geraniums her daughter picked out are thriving below.

Amethyst, petrified redwood, fossils, and other small treasures the kids discovered in the yard are on prime display on a narrow shelf that was Nilson’s daughter’s idea. “She loves to collect rocks and crystals,” she says. Nilson’s dad, a contractor, built the bench. Up above, there’s a lofted nook, complete with a foam mattress pad Nilson cut to size and wrapped in a blanket she picked up on a trip to Mexico. The kids can access a hidden compartment up there that currently houses a toy bow and arrows.

In the event that the kids are outdoors when the sun begins to set, Nilson bought a pack of three solar-powered lanterns on Amazon. Two of them are always outside charging, while the other hangs from a simple eye-hook inside. “There’s always a backup,” she says.

Clad in wood scraps and plexiglass, the Dutch door offers flexibility and opportunity for play (the kids can lock the top half and leave the bottom open or vice versa). There’s also a cutout drive-through window on the other side of the treehouse where they can take each other’s food orders.

The only other place Nilson had painted a floor was her daughter’s bathroom—a space she quickly learned was far easier to keep clean. “I had an aha moment as I was vacuuming up dead bugs,” says Nilson. She ended up giving in to perfection soon after she spilled a quart of purple paint on the nearly finished design; the boards will take a beating, despite the fact that she applied a hefty coating of protective polyurethane. “They’re going to get destroyed by the sheer joy of my children playing in there,” she says. “I’m pretty positive that’s what matters.”