There’s One Word to Describe This Stylish Austin Home: Bold

A lesson in decorating fearlessly. 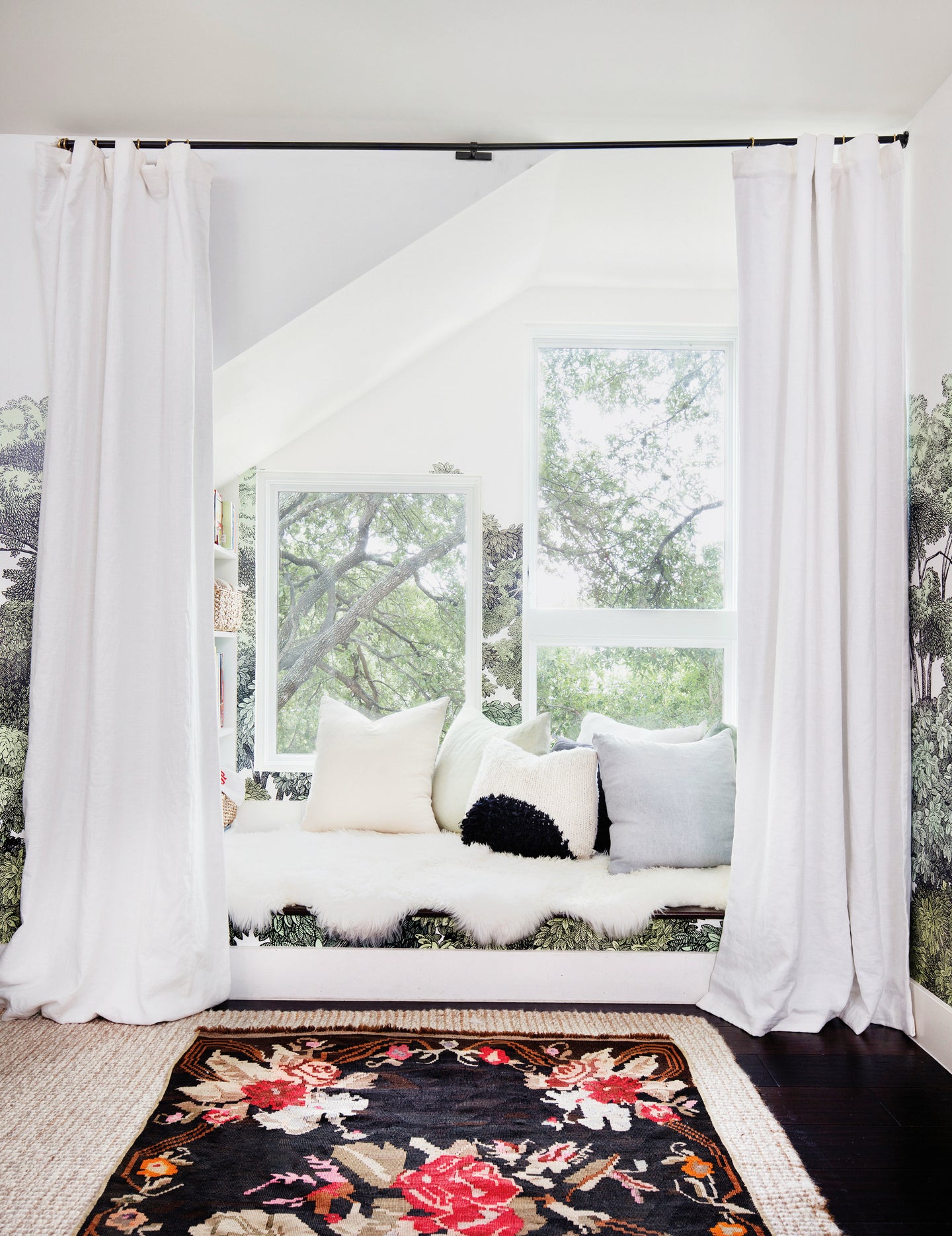 Approaching a blank space “like a collage” is clearly a trademark of Consuelo Pierrepont Spitler. Though the vivacious mom of two values mid-century modern forms and textures, she isn’t afraid to push the envelope when it comes to mixing eras. “Genre mash-ups are my forte,” says the cofounder of Sway Studio, a buzzy design ﬁrm specializing in hospitality and retail, with offices in San Francisco and Austin, where Spitler is based. The four-bedroom “Cubist barn” she renovated in the leafy Travis Heights neighborhood—which she shares with husband Russell, sons Jack (4) and Cy (2), and poodles Rad and Butter—mirrors its owner’s trajectory: “a ramble with a good helping of serendipity.”

While working as a special events manager at Travel + Leisure for several years, Spitler honed her chops in event production, orchestrating high-profile gatherings and designing the accompanying furniture. When the market crashed in 2008, she decided to go back to school (and move cross-country) to San Francisco, where she met and fell in love with Russell, whose career eventually brought them to Austin.

In 2012, along with business partner Katie Spalding, the Chicago native founded Sway Studio, undertaking projects such as conceiving a series of shop spaces for the decor outﬁt St. Frank. “The idea was to create a home experience,” explains Spitler of the online brand’s first New York storefront, which opened in Greenwich Village in April. Sway Studio brought that mission to life with artfully assembled vignettes featuring indigenous textiles from Guatemala, Vietnam, and Mali made into vibrant pillows, throws, and accessories.

Designing her own home, however, proved more of a challenge for Spitler. “It was different, because I had to look through the lens of my toughest client—me—and figure out what pieces I find inspiring,” she recalls. “I’d rather have an old milk crate as a bedside table than buy something quick just because it matches.”

This buy-only-what-you-love ethos is reflected everywhere. In the dining room, an amethyst urchin light fixture sets an ethereal mood against the turquoise splash of a Chinese Art Deco rug and the jewel tones of an antique oil painting, purchased from a dealer in northern Michigan (who scraped off the tar it collected from years of hanging in a men’s smoking lodge). The dyed plaster walls were inspired by the washed-out cinematic palette of The Danish Girl and create “a sort of immersive sensory experience.”

“I’d rather have an old milk crate as a bedside table than buy something quick just because it matches.” –Consuelo Pierrepont Spitler
advertisement

The rest of the house retains a similarly inspired abstract aesthetic, with a highly curated mix of repurposed finds and blue-chip collectibles. “Energy drives space planning for me,” explains Spitler, a consummate host who wanted the living room, with its bone-white backdrop, to feel like a “chilled-out cocktail area.” A pair of Ricardo Fasanello Anel dining chairs encourage close conversation, while a Vladimir Kagan chaise longue, redone in Pavoni suede and Pierre Frey mohair, welcomes guests beneath a custom Sorenthia light fixture by Studio Dunn. The airy kitchen, overlooking the family room, was designed for “efficiency and simplicity.” Spitler chose a showstopping slab of Carrara marble but otherwise kept things neutral.

A deep love of nature, instilled by her outdoorsy father, is hinted at throughout. The boys’ bedroom was transformed into a bona ﬁde tree house, complete with a mystical wallpaper mural that isn’t overly kid-centric. “They could keep it for 20 years and it wouldn’t be weird,” says Spitler of designing with longevity in mind. The avid gemstone collector loves to replicate natural colors and textures, be it an assortment of rocks on the beach or flowers from along a trail. “My furniture and lighting design is largely influenced by the proportions and symmetry found outside,” she explains. “I take delight in the perfect imperfections.”

The intentionally pared-down palette (which carries all the way outside to the house’s black exterior) allows her art collection to shine. A fascination with exploring lesser known cultures tends to inform her choices—see: the Richard Mosse infrared photograph Before the Flood hanging over a beloved Chesterﬁeld sofa in the family room, and close friend Minta Maria’s painting Charro de San Antonio, depicting a Mexican cowboy. Each is striking, but also speaks to Spitler’s unique sensibility. “You never want to ﬁt in a category,” she says. “If you’re doing it well, you can’t put a finger on what it’s called. It’s your story.”

For her clients and at home, Spitler is all about personal, eclectic interiors. Here, she explains how to get that coveted look.

“Think of what you want to highlight,” says Spitler, who softened the angular lines of her living room with curvy side chairs and sofas. “Then find something that complements it and ties the space together.”

“Buy a piece you’re really excited about,” she urges. “It’s about taking that pause, sleeping on it, and coming back the next day with certainty.”

“Leave a wall blank,” Spitler recommends. “It’s fun to get wild and loud, but you can go too far. When you walk into a room and just feel at peace is when you’ve taken it to the right place.”

“They’ll go the extra mile and negotiate on your behalf,” says Spitler, who “fosters genuine relationships” with the people she works with because she values learning from them so much.

This story originally appeared in the Winter 2018 issue of Domino, titled “Austin City Limits.” Subscribe to be the first to receive each issue!