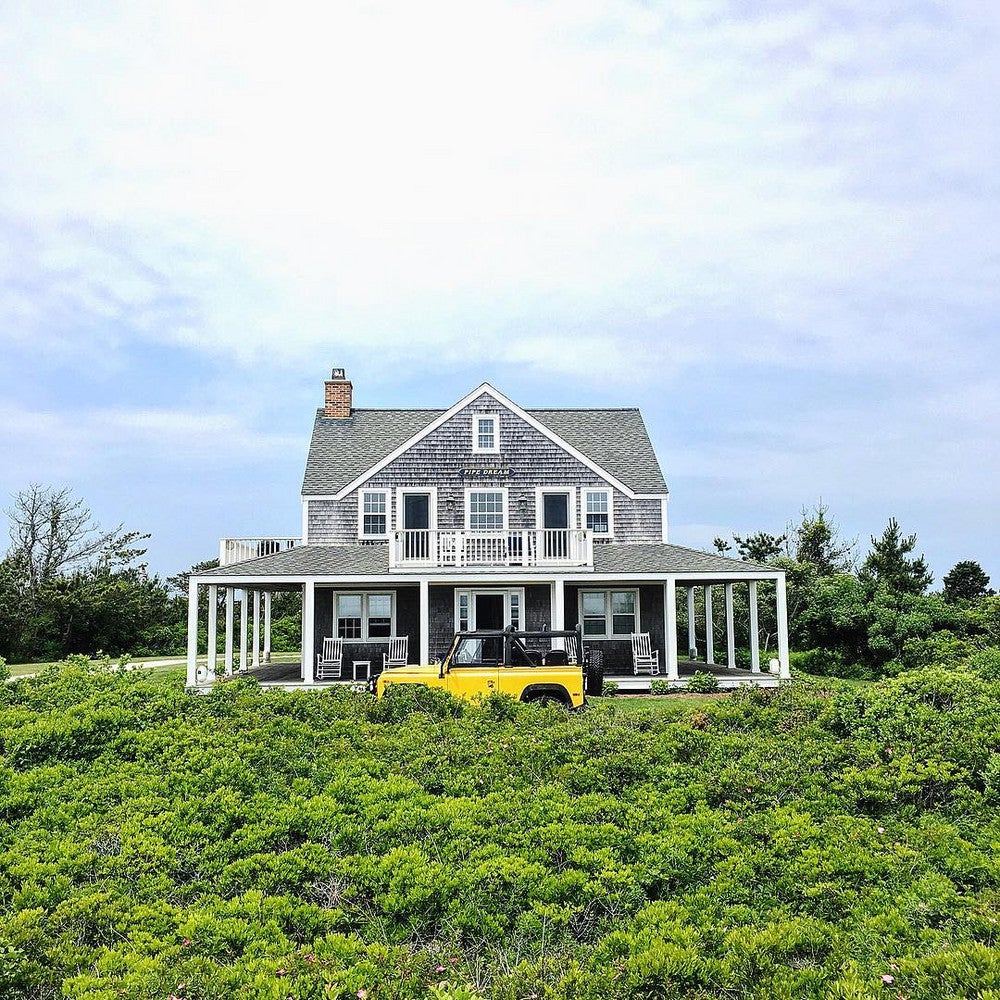 Designers create beauty and intrigue in and around the home, so it makes sense that when they travel, they want to be surrounded by stimulating, uplifting, and restorative sights. On our list of designers’ favorite summer escapes are the usual suspects like Nantucket and the Hamptons, as well as hidden treasures like Lake Gaston. What’s clear is that even the busiest designers cherish their time to recharge and get away in order to come back inspired and ready to create again.

Will Taylor of Bright Bazaar has found plenty in Nantucket that speaks to his “Make You Smile Style” philosophy including picturesque lighthouses and colorful doors and windows that pop in contrast to the island’s traditional wood-shingled homes. “I love to visit Nantucket in the summer,” he says. “Last year, I visited to celebrate my and my husband’s wedding anniversary, and we’re hoping to do the same again this year. There’s something so relaxing about exploring the island by bike. I love all the beautiful cedar shingled homes, too. They’re the perfect inspiration for the Cape Cod cottage we just bought close to the Hamptons!”

Lauren Liess’s favorite spot is only a few hours away from her Virginia home, making it the perfect accessible, family-friendly vacation destination. “Lake Gaston is like my family’s exhale,” she says. “We love going there because it’s a secluded getaway with not much else to do other than be with loved ones and friends. People are there to spend quality time with the people they love, not to see or be seen. We spend our time there swimming, boating and doing water sports, fishing, taking walks, and cooking and eating in the summer.“

With days filled with activities including picking flowers and greens, throwing sticks in the water for the family dog, swinging on the outdoor hanging chairs with her kids, spending the day in the lake, and occasionally returning at night for another swim under the stars, no wonder Liess says, “I totally feel like a kid again when I’m there.”

Jeanine Hays and Bryan Mason, the design duo behind AphroChic, are traveling to Morocco—a bucket list locale that has been influencing their style for years and also served as the inspiration for their new collection of vintage rugs.

“This summer, we are looking forward to visiting Morocco. It’s been a dream destination for us for some time,” they explain. “We’re inspired by the history, the souks, and the artisan items that can be discovered there—from Berber rugs to pierced lighting. It’s a dream journey that we can’t wait to embark on.”

Provincetown has long been known as a haven for creatives, and this pretty, unique Cape spot is popular with four-legged friends as well as the well-heeled. Designer Ken Fulk, a longtime summer resident says: “Every year we pack up our family—of now FIVE dogs—and head to the east coast to a little fishing village at the tip of Cape Cod. Provincetown is one of those places you have to work to get to. It’s not on the way to anywhere else. Thus its nickname: Land’s End. We’ve been making the journey for a couple of decades now—first coming in our early twenties. A mere 24 hours there is enough to restore the soul. Our days are made up of romps on the beach, naps on the back porch, and dinners with family and friends. My pal once summed how he felt about P’town as being at least 30 percent happier when he’s there. I might go as high as 50.“

LA-based designer Mark D. Sikes and his partner Michael Griffin venture up the coast when the temperature heats up. “We love Montecito in the summer,” Sikes says. “The Biltmore Santa Barbara is a favorite spot on one of our favorite beaches—Butterfly Beach.”

Sometimes the toughest decision of the day is whether to relax poolside at the Coral Casino Beach and Cabana Club or to hit the beach. When they are not traveling to their favorite spots or venturing to new ones (this year they are headed to Nantucket for the first time), Sikes and Griffin admit, “summers in Los Angeles are the best time of year, and we do love our garden. It is always nice to come home to.” Especially with a garden as Instagrammable as theirs.

Oeuf creators Michael Ryan and Sophie Demenge crafted their modern furniture and clothing lines with an eco ethos focusing on simple, streamlined, and sustainable design, so it’s not surprising that they would want to take a digital break and focus on being present with their family while on vacation. “Our favorite summer escape is a super-secret spot in the south of France,” says Demenge. “We stay in an old house with no internet access, and so we are forced to have real experiences like going to the local market, walking in fields of lavender, swimming, playing petanque, and actually spending time together as a family. It is like going back in time, which is the most refreshing thing in the world.”

Celerie Kemble’s far-flung  and frequent travels are well-documented; in the past few months alone she has spent time in Palm Beach, New York City, the Dominican Republic, North Carolina, and Long Island. One of her favorite escapes in the summer is to the Adirondacks, where the family slows down long enough to go fishing, canoeing, and frog catching while taking in peaceful sunsets.

Plenty of fabulous people make the Hamptons their warm weather vacation spot, and interior designer and co-founder of Au Fudge restaurant Estee Stanley and her family fly cross country to reach their annual summer escape. As evidenced by her IG account, eating popsicles at a beloved local taqueria, relaxing with family, and admiring wildflowers all provide a welcome and refreshing change of pace from Stanley’s busy LA life.

How 21 People Got Their Jobs in Interior Design Yes, You Can Really Rent a Private Island This Hotel is Looking to Bring Luxury to All