This 3-Story Loft Is a Sanctuary for Two Philadelphia Restaurateurs

And the kitchen is as great as you'd expect. 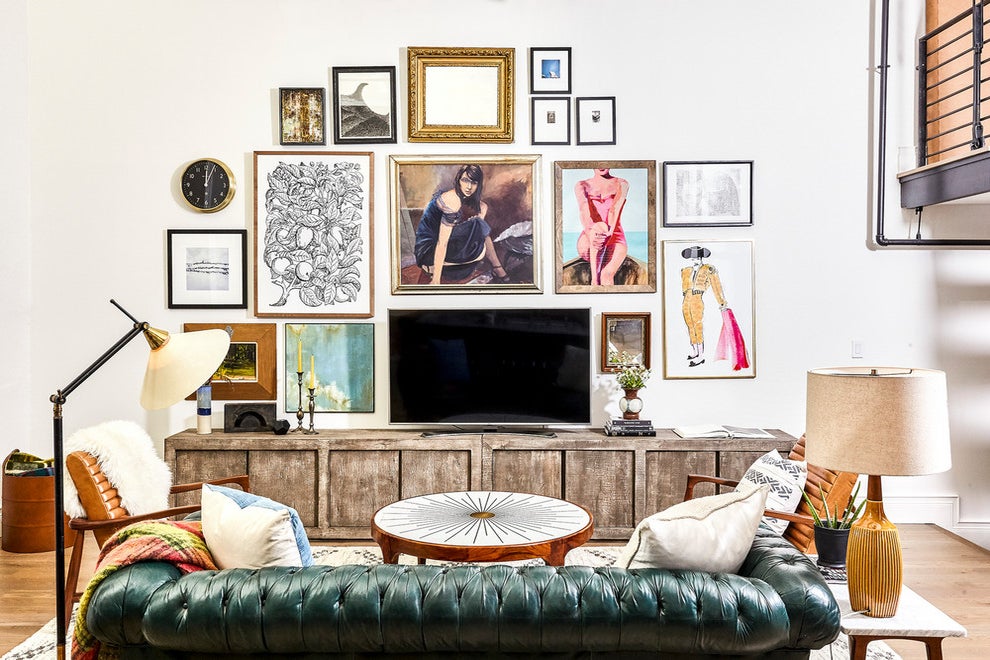 Valerie Safran and Marcie Turney own 10 bustling businesses in the Midtown Village neighborhood of Philadelphia (including five restaurants). So, when the couple bought their three-story loft, they knew exactly who to turn to for help designing their ideal home: Kate Rohrer.

“We opened Bud & Marilyn’s about three years ago. It was our fifth restaurant and the first time we worked with a designer, and we just connected,” says Safran. “What we had in our brain and what she would bring us were so in sync, I never doubted Kate’s ability.”

Interior designer and owner of the Philadelphia-based studio Rohe Creative, Kate Rohrer has spent more than a decade in the field, focusing on hospitality projects that include warm and vibrant restaurants, cafes, and bars. But in that time, she’s been tapped more than once to work on a restaurateur’s personal space. After Rohrer finished bringing the retro, New American restaurant to life, Safran and Turney asked the designer to work the same magic in their own new home.

The 10-year-old condo, located just two blocks from the couple’s businesses, was dated. “The paint colors were bad, the kitchen was bad—the whole thing needed to be redone,” says Safran. “It’s interesting, when you look at a place, 10 years isn’t that long—but a lot changes in design.”

So, Rohrer set about reimagining the outdated loft. Though there are certainly advantages to working with the same clients on both their businesses and home, Rohrer says there are differences between the two approaches—and a few added challenges, too. “In the home, in general, dealing with clients is much more personal,” she says. “There’s a longevity to the items that you’re selecting for them. We walk through the process a little closer together than you do with the restaurants.”

Thanks to the countless hours the couple spend working, Safran and Turney are a little more comfortable in the restaurant setting, according to the designer. “This was the first time they were taking time out for themselves and creating a beautiful space just for them to live in. It was challenging to define what their aesthetic was, and what they were comfortable living in on a day-to-day basis.”

While a mid-century modern aesthetic appealed to the pair, Rohrer had to recalibrate for a home. “In Bud & Marilyn’s, in particular, you can see their love for that [design], but having it be your entire home would be a little too much, a little too kitschy,” she says. “So, it was important that the home had a timelessness to it, a more modern look.”

Once Rohrer honed in on that aesthetic, she was able to give the home a cohesive, modern refresh. “When we went in the space, there were these big accent walls, which were kind of trendy and cheesy,” she says. “We wanted to give it a warm and bright architectural shell, so we committed mostly to white. That was hard for Val: She doesn’t want to paint anything white in a restaurant because it gets filthy. Committing to that envelope of purity and letting that beautiful light shine in through those windows, it also creates a backdrop for anything we put on top of it. The furniture shines a little brighter, the banquettes and leathers, you appreciate them a little more, because they’re up in contrast against this bright white color.”

Rohrer’s goal was to keep the kitchen big and open, but warm and inviting. “That warmth really comes from the beautiful slabs of walnut on the custom cabinetry,” she says.

The designer also used a thick slab of the walnut wood to create a shelf that bisects the big window, displaying a collection of cookbooks and greens. The gray and white tile backsplash adds visual interest and complements the marble countertops. “It was just a beautiful way to get a little bit of that geometric mid-century nod in a classic, timeless material, and it turned out beautifully,” says the designer.

In the adjacent dining area, a leather banquette was a fun little nod to the restaurants. “That space was challenging, and it was a smart way to use the existing architecture that was there,” says Rohrer. “It’s an homage to the restaurant, and also just a great, comfortable place to sit. When it’s just Val and Marcie, they don’t have to feel like they’re sitting at a giant dining room table, just the two of them—but if they do have guests, it still works for eight to 10 people.”

Rohrer found a creative way to make an unsightly television disappear. “One of my biggest pet peeves is having the TV be the focal point in a living room, which, unfortunately, you can’t avoid because you have to think about how someone uses the room,” she says. So, the designer transformed the flat screen into a beautiful gallery wall instead.

“That wall, which was basically two stories, was screaming for something to accentuate it, so this was a way to get eclectic color and texture on that wall, against an otherwise white room,” she says.

The green leather Chesterfield sofa, on the other hand, was a vintage market find. “I chose it because the island is navy blue, and that was one of the only paint colors in the space. The green sofa felt like a jewel tone, so it was just another way to get a pop in there.”

The designer added a little desk area to utilize an odd nook between the dining room and kitchen, using the same custom walnut cabinetry, navy blue color, and brass hardware to bridge the two rooms.

Throughout the apartment, Rohrer worked to gracefully accentuate the industrial feel of the space. The trim around the big, lofty windows was originally brown, but the designer chose to repaint it a dark, blackish-blue. “We did it on the stair, and on the sprinkler pipes on the ceiling. We painted them black (instead of white) just to reinforce the idea that this was an industrial loft at some point.”

The outdoor terrace is connected to the couple’s master bedroom, so Rohrer endeavored to conjure up a cohesive feel between the two spaces. “It was important that it be picturesque, and that the furniture out there reflected what was happening inside,” she says. “It was really about bringing in the warmth of the wood—a beautiful walnut tone—but you can’t do walnut outside; it wouldn’t hold up. So, we used a nice warm teak, and softened it with pillows and lots of greenery. We created custom planters and a huge bed of succulents to cover the unsightly roof, four or five feet deep.”

Now, it’s the perfect spot for Safran and Turney to entertain friends and family.

The couple is thrilled with their calm, cohesive sanctuary. “There are times I look around and just think, ‘This is so beautiful,’” says Safran. “In the restaurants, we live in this world of crazy, but here, it’s a very peaceful escape. It feels like we’re in another world.”

Inside a Yogi’s Tranquil, 500-Square-Foot NYC Home We’re Obsessed With the Statement Lighting in This Artful Apartment Proof You Can Renovate Without Sacrificing Old-School Charm