The Bright, Green, and Hearty Recipes We’ll Be Serving On St. Paddy’s Day 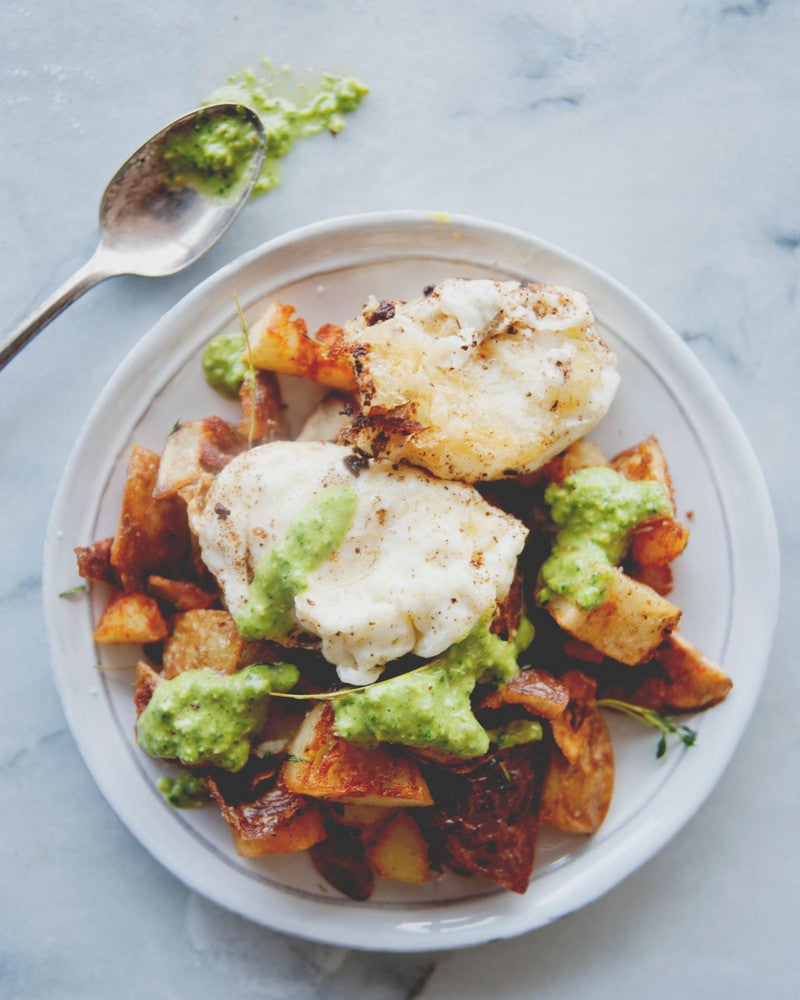 Photography by THE KITCHY KITCHEN

by Claire Thomas of The Kitchy Kitchen

When I think about the food traditions that pop up around St. Patrick’s day, two elements come to mind: green and hearty. Green – the color of Irish nationalism and the heartiness heavily influenced by the ingredients that were historically raised there: cabbage, sheep, and in the 16th century — the potato. Every March I try to cook something as an homage to my Gaelic heritage (McNamara on my mother’s side), and these are some of my favorite recipes for it. Some are inspired by the Irish canon de cuisine, some are obviously influenced by my Southern California home, but they’re all fun, simple and delicious recipes to whip up anytime — but especially on March 17th. Enjoy!

Leave it to the French to make a giant cheese and bacon hash brown sophisticated, but that’s exactly what’s going on with this tres chic tart. The grated potato crisps up beautifully, the brie adds a bit of richness, the bacon adds…bacon, and the mesclun green salad cuts through the whole thing beautifully. Though this is delicious hot, it doesn’t have to be served straight out of the oven. Serve it as is for a lovely lunch, or add poached eggs on top for a decadent brunch centerpiece.

For a refreshing drink with a little bit more going on, I threw some greens into my lemonade and switched out sugar for low glycemic (and brown sugar tasting) agave nectar. The result is a bright, zesty drink that is perfect on a hot day.

Juice the lemons. Put all of the used halves into a bowl and cover with 2 cups of hot water. Let it sit for about 10 minutes. The hot water pulls all of the natural oils out of the lemon skins and adds so much flavor. Strain into a blender and add the lemon juice, cold water, kale, parsley, mint and agave. Puree fully and strain. Pour into a pitcher and chill in the fridge until ready to serve.

For potatoes, toss potatoes in a pot of water, bring up to a boil, and cook until tender but still a bit hard in the middle, about 8 to 10 minutes of boiling. Drain, pat dry, and smash each wedge with the back of a fork. Add the olive oil to a pan, the oil should be about 2 inches deep, with at least two inches of pan above it. Bring to about 325F, add the sliced garlic and let it cook for about 20 seconds, flipping, until golden brown and fragrant. Add the potatoes and cook, turning once, until golden brown. Drain onto a paper towel. Turn up the heat to 400F. Add the potatoes again, until a deep golden brown (about another 3 minutes). And drain on paper towels again. Season with salt and pepper. Add the eggs, one at a time, and fry until the whites are set, about 3 minutes. Drizzle with salsa verde and serve.

Add everything in a food processor and pulse to combine.

Cook potatoes in boiling salted water to cover until just tender, about 3 minutes, then drain. Shred the corned beef. Combine all of the ingredients, except for the eggs and chives, in a bowl, lightly tossing to coat. Heat 2 tablespoons butter in a medium nonstick skillet over medium heat. Add the corned beef mixture and press into a pancake. Cook undisturbed until underside is brown and crisp, 6–8 minutes. Set a plate over pan and carefully invert pancake onto plate; slide back into pan, pressing back into shape if needed. Cook until second side is brown and crisp, 6–8 minutes.

If desired, make 4 holes in hash and break 1 egg into each. Cook over moderately low heat, covered, 5 minutes, or until eggs are cooked to desired doneness, and season with salt and pepper. Sprinkle hash with parsley.

I’m new to the whole Bloody Mary thing, as I’m not really into tomato juice, but I love the idea of a savory cocktail. The key is balance and liberal heat. So in celebration of St. Patty’s, I thought a green take on the hungover brunch classic was in order. In this version I lose the tomatoes and include an infused vodka. If you want it SUPER green, feel free to add a shot or two of your favorite kale juice.

In a cocktail shaker, muddle the cucumber, jalapeño, cilantro, salt, cumin, and celery seeds. Add the infused vodka, green hot sauce, Worcestershire, lime juice, pickle/olive juice, and ice and shake for 15 seconds. Strain into a glass, top with club soda if you wish, and serve with a celery stalk.

Combine all of the ingredients in a jar, seal, and leave in the fridge for a few days. If you want it sooner, leave the sealed jar on the counter for a few hours. The longer the better. Strain and use.