These Flintstone-esque Nooks Are the Bookshelves of the Future

We don’t normally want holes in our walls, but… 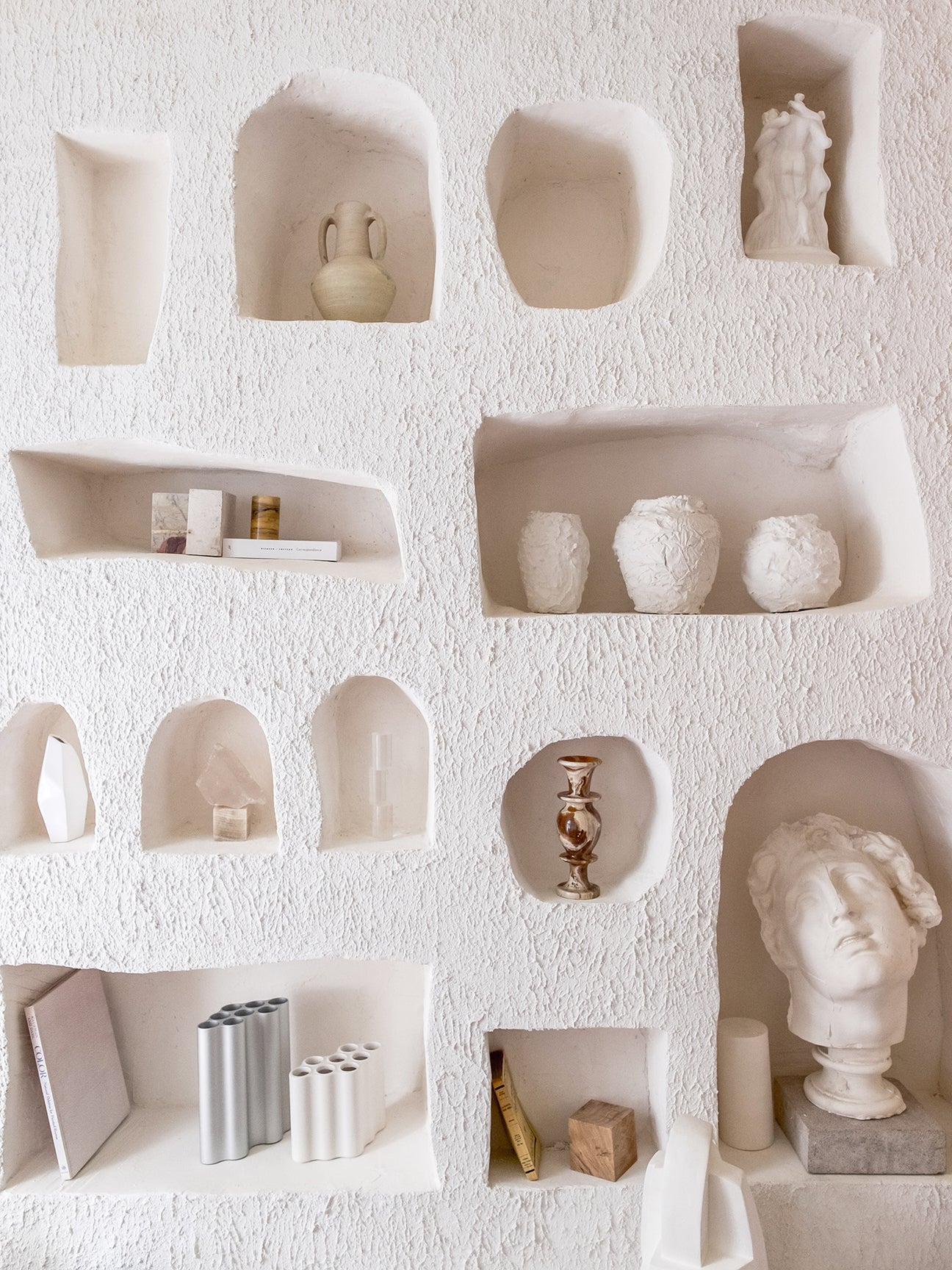 You name the shelf, we’ve seen it: built-ins, honeycombs, floating planks, industrial racks—the list goes on. The latest adaptation, though, is nothing like any of these options. The storage solution in question: recessed wall niches.

“The inspiration comes from typical Mediterranean architecture,” says Kim Haddou, who, alongside her design partner, Florent Dufourcq, created one of these nook-like displays for the 2018 Design Parade in Toulon, France. Since then, we’ve been seeing these nooks everywhere, from Simon Porte Jacquemus’s Oursin restaurant in Paris to the newly opened Sonia Boyajian jewelry store in Los Angeles, designed by Studio Shamshiri.

Filled with vases, books, or candle tapers, each crevice becomes a stand-alone vignette. The catch: “You can’t create these niches in just any type of wall,” says Haddou. Here are four things to know before you try your hand at one of these cubbyholes:

While Haddou admits it’s “probably possible” to do this with a solid poured concrete or brick surface, a deep wall made out of a lighter cement mixture is best (it will be easier to carve into). If you’re dealing with a structural barrier, Dorothée Meilichzon, the designer behind Menorca Experimental (a hotel that features a sleek arrangement of narrow inset shelves), suggests doubling the depth of the existing facade. “If it isn’t supporting anything, you can carve the shapes directly into it,” she says. If you do go with a faux surface, once it is built out and ready for carving, draw the shapes for the alcoves using chalk.

But Don’t Go Too Far Back

Haddou and Dufourcq used a pneumatic drill to “dig” out the niches in their space. “It’s not too difficult if you’re an athletic person, but it takes a while,” says Haddou. The good news is you don’t have to go that far back. If the niches are too deep (more than 10 inches), the alcoves will be very dark. “It should feel fresh and sunny—like summertime in Greece,” she adds.

For that rough-hewn, grotto-inspired feeling, use a roller to go over the surface with a textured plaster paint. Haddou and Dufourcq used a French mixture called crepi, but there are similar masonry coatings sold in the U.S. that will do the trick. If you want something smoother that only looks textural, Meilichzon suggests a coat of limewash paint.

Fill It With Treasures

If you’re a type A planner and already know which items you want to put on the shelves before you even pick up a drill, cut the recesses according to their shape and size. Generally speaking, Haddou says these kinds of nooks are great for showing off pottery, vintage vases, and busts. Another unique approach: Stick with one type of object. Allied Maker’s New York showroom makes a case for filling these holes solely with sculptural light fixtures. Books are just the beginning.

See more stories like this:  Expert Takeaway Tips for Organizing Your Bookshelf All I Want in Life Is a Bookcase Door We Hacked a $3,000 Custom Built-In Bookcase for Just $500