We spoke with the Fab Five designer ahead of the Season 2 premiere. 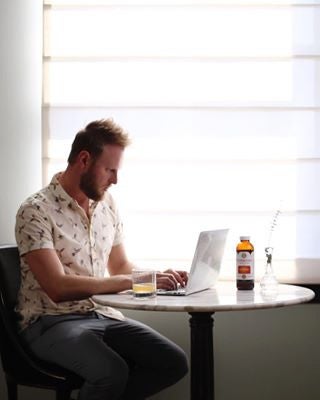 If you haven’t tuned into Netflix’s Queer Eye reboot yet, you’re seriously missing out. The show—that almost instantaneously gained a cult following—is worth a day of binge-watching ahead of the Season 2 premiere this Friday, June 15. To say fans are ready to travel back to Atlanta with the Fab Five to meet this season’s heroes is an understatement.

We had the pleasure of speaking with designer extraordinaire Bobby Berk, aka ⅕ of the Fab Five, on all things Queer Eye and design. Bobby’s role as the resident designer means he has the opportunity to makeover each man’s  home to better fit his needs and style in just one week—he gets the home on a Tuesday afternoon and has to have it camera-ready by Friday morning. Keep reading to learn his biggest design challenge from the new season, plus advice for people who want a home makeover, but don’t know where to start.

On landing the designer role in the Fab Five:

On the show gaining popularity:

“We really didn’t think it would blow up like it did. I think we were all a little nervous that lightning couldn’t strike twice, that we wouldn’t be able to do as well as the original guys did. They’re heroes to us. We think so much of them, we have so much respect for them—they paved the way for us.

“Queer Eye came out the very first year I moved to New York City, and it showed me that hey, you know, here are five guys that are out and proud and are successful in their fields, and it gave me hope that I could as well.”

How it feels to be dubbed the hardest working of the Fab Five:

“I wear it with a badge of honor. I’ve always kind of been that person. I moved out of my home when I was 15, and I had no choice but to work my ass off to get to where I am. So to me, it’s not really anything different than what I’ve been doing the last 15, 20 years of my life, just working my butt off and doing what I need to do to make things happen.

“But that being said, I always want to make sure that people realize that it’s not that my job is any more important or that my job does anything more for our heroes than my counterparts. It just happens to be that mine is the most labor-intensive and time-consuming.I knew that going in, I knew that my job was going to take more time than cutting hair.”

“But the thing is, that there are episode where Jonathan’s haircut did more for those guys and their self-esteem than me designing their house ever could. It’s not necessarily about the workload—it’s about how each of our verticals is able to help the hero that we’re working with that week. Sometimes it is the home, sometimes it’s the haircut.”

On his biggest challenge in Season 2:

“In one episode, after already choosing to take on more construction than I normally would have time for, I decided there was a random closet in the dining room of this home that was completely unnecessary and stupid, and it took up the only wall that you were able to hang art. The dining room was also on the backside of the master bedroom, and the master bedroom had a super tiny closet. So I said, I’m going to fill in this closet in the dining room and I’m going to give that closet space to the master bedroom. That makes more sense.” Once we dug in there, we realize the house had a terrible termite infestation, so we actually had to rip out way more than we intended.”

“That episode also actually turned into a crazy amount of problems, because all the furniture that I ordered—the truck disappeared. So the day of install, we had to run around Atlanta frantically pulling things from stores as fast as we could. Luckily, the two West Elm stores in Atlanta really helped us out and let us pull things off the floor.”

On the process of designing someone’s home without meeting them first:

“I get a one sheet, but honestly it never has any good information. Because most of these guys, they’ve never thought about design. Design was just never on the forefront of their mind. They didn’t really understand how to answer what their look was and what their aesthetic was. I find that even with clients that I take on that have taste, but don’t necessarily have the time to do their own home, they have a hard time articulating what their actual aesthetic is. Which is why normally, I’ll have clients create a Pinterest board for me. It doesn’t even have to be pictures of home stuff, just pictures of things that they love—colors they love and buildings, it helps me get a sense. But I don’t have any of that on the show.”

Who’s home—from the Fab Five—he would make over:

“None of them, actually. Anthony’s partner, his name’s Joey, works for First Dibs, and they have the coolest apartment in Brooklyn.Anthony has this crazy-vast knowledge of antique and vintage furniture from working in a vintage store, and his boyfriend is a super talented designer himself.”

“Tan just bought his dream home in Salt Lake City. He closed on it during, I think, our eighth episode. He has amazing taste and has decked that home out beautifully.”

“I would have redone Karamo’s, but after we got done filming, and he had to come back to his apartment in Sherman Oaks, he was so bummed at how it wasn’t decorated at all. So he took all that he had learned from me during the episodes, and he completely Queer Eyed his house out. He did the work for me.”

“Jonathan did the exact same thing. They all got so bummed that their places weren’t done very well after seeing the really cool spaces on the show. Jonathan’s ex-boyfriend is a designer as well, and before we even got back done with filming, Jonathan hired him to come in and redecorate his apartment before he got home, because he was like ‘I can’t go back to this depressing apartment after being in these cool spaces for four months.’”

“Mine is actually the one that I’m getting ready to redo.”

On staying organized through the show:

“I do pre-planning for every the episode. I have to know measurements, I have to know window sizes. There’s no way for me to get all the custom window shades that week. So those types of things, we do get access to. Sometimes we’re working on three or four episodes at once.”

“And I’m really lucky that I had a really great team. My art director was the art director on Extreme Home Makeover, and they would build entire homes in a week. My team was able to take my designs and make sure they got executed properly when I was filming and couldn’t always be there.”

“Outside of the show, I work with a lot of home builders on installations, and that’s even more than we do on Queer Eye, because it’s literally the entire home—all the bedrooms, all the living rooms. We’re just not having to paint and stuff. I’ll often install three homes at one time; it’ll be a model park where we have three homes are right next to each other, and we’ll pull in with a semi-truck full of furniture and install three entire homes, from start to finish, in three days.. So I was lucky enough that since that’s the way we work, I had it down when it came to Queer Eye. I knew how things needed to be organized to really be able to execute them in a short amount of time.”

Advice for people who want to revamp their space but don’t know where to start:

“Look at the example of Remi [from Season 1, who lived in his grandmother’s house]. It was very daunting to him, because everytime he thought about making that home his own, he thought about the entire home. And then he’d be like, ‘I don’t have the time, the strength, or the know-how.’ So my advice is always to start with a small space—an entryway, or one corner in your living room. Once you’ve got one space done, it kind of motivates you, and that momentum is going, and it’s much easier to keep going and do more once you’ve figured out how to do it on a small level. Don’t try to take it all on at once, because that will just be too much, and you’ll just end up having tons of unfinished projects.”

This interview has been edited and condensed.

Related articles:  First-Time Decorators: Avoid These Common Decor Mistakes You Are 3 Easy Steps Away From a Stylish New Space Here’s How You Can Star in the Next Season of ‘Trading Spaces’