After a Leaky Pipe Disaster, This Designer Reimagined Her Office With Smarter Storage

And brought in a bar cart. 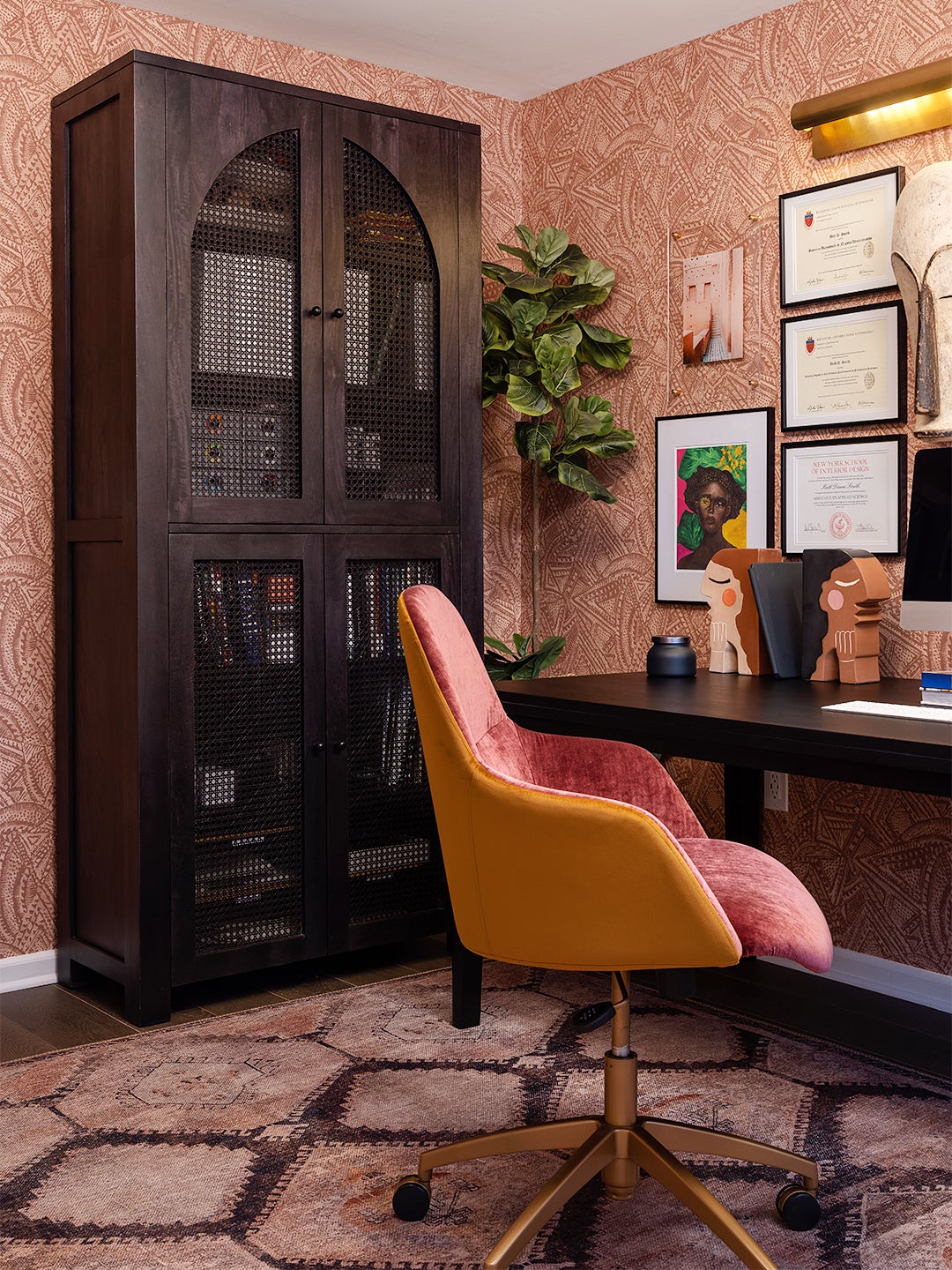 In 2019, Beth Diana Smith’s second-floor washing machine wreaked havoc on her New Jersey home. “It created a lot of chaos,” she recalls. A leaky pipe caused serious water damage: Her downstairs wood floors were ruined and she had to replace parts of her ceilings and walls. But even after those essential repairs, the interior designer never felt like her wall-to-wall carpeting upstairs fully recovered from the accident, particularly in her office space, which is also located on the second level. The One Room Challenge was the perfect excuse for Smith to focus on improving her work zone, making it a space where she actually wants to take calls and review samples for client projects. Naturally the dingy floor covering (which also seemed to be making her seasonal allergies worse) was one of the first things to go during the start of the eight-week reno.

“I was happy to get rid of it,” says Smith. She brought in a pro installer to put in Raintree’s Backcountry product: an engineered hardwood with a waterproof core. “Even though my infamous washer has now been replaced, it still makes me nervous,” notes Smith. The fresh flooring is also indentation resistant (so she can move as much heavy furniture around as she likes without stressing). Once the important groundwork had literally been laid, Smith began fine-tuning the details.

Because the office is situated right at the top of the stairs, the designer wanted the room to pack a visual punch. Smith found the impact she was looking for in artist and activist Malene Barnett’s Kindred wallpaper collection for Lulu and Georgia. She landed on the Alaari print in a pink-terracotta tone. “I wanted people to start walking up my stairs and look up and be like: Okay, she did an amazing job,” says Smith. “I wanted that feeling.”

Only three or so months before Smith decided to do a full revamp of the office, she had purchased two long, low credenzas to house her supplies. “I thought they’d be great because I’d have a lot more table space,” she notes. But it didn’t take long for her to realize that the pieces were taking up too much floor space, so she moved them to her garage (she’s giving one to a friend) and bought a vintage-inspired cabinet that’s 86 inches high and 39 inches wide. The unit holds way more than meets the eye: boxes full of material samples, camera equipment, reference books Smith accrued while attending the New York School of Interior Design, and even overstock pillow covers.

Make Your Seat the Best One in the House

Instead of replacing her existing desk chair, Smith simply reimagined it. “It did the job,” she says of the comfortable seat (the only con was its blah gray color). “I looked for office chairs high and low and so many were either really ugly or really boring.” A DIY in this case was the best route. With some marigold- and ruby-hued fabric and a touch of rose gold spray paint (for the legs), she made the furniture appear brand-new.

Here’s a thought: Don’t buy a desk. In an effort to maximize her surface space so she could fit her desktop, paperwork, iPad, and other daily necessities, Smith bought a dining table from Lulu and Georgia and pushed the 82-inch-long piece up against the wall. “The dimensions are perfect: It’s ginormous,” she says. Before purchasing any furniture, Smith mapped out the room to a T in AutoCad to make sure everything would fit.

Show Off Your Diplomas

For forever Smith kept her college degrees boxed up, but during the renovation, she gained a new perspective. “I was like, as much time and energy and money I’ve invested in my education, they should go back up on the wall,” she says. While diplomas can sometimes look stuffy or too doctor’s office–y, by displaying them alongside vintage African masks and other artworks (the central painting is from The Black Home), her degrees blend right in. Smith shined a spotlight on her accomplishments by mounting two brass picture lights.

The long bench under the window that doubles as extra seating was a HomeGoods steal. “It was love at first sight,” shares Smith with a laugh. The matte black bar cart (also from HomeGoods) was a similar story: “Having a bar in my office was on my must-have list,” she says. On Fridays at 5 p.m., it’s the hottest place to be.