when design is the star 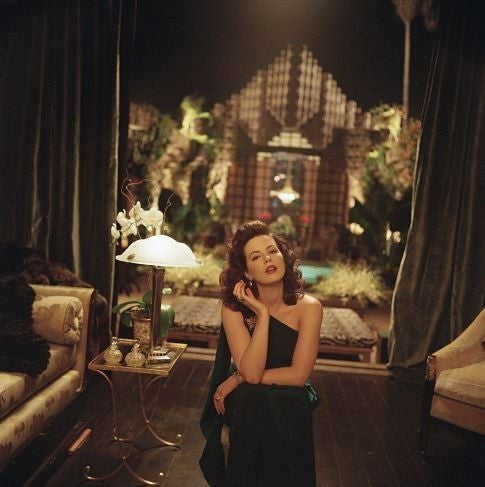 Awards season is upon us, and you know the actors will get all the glory. We love movie stars, but we love movie sets more. In honor of the five amazing sets nominated for 2016 Academy Awards in production design, we’re sharing some of our favorite sets whose designers have won Oscars–and for good reason.

Wes Anderson’s Grand Budapest Hotel is a feast for the eyes as it leads viewers through a grandiose pink hotel. Art director Adam Stockhausen said he was inspired by the Grandhotel Pupp in the Czech Republic.

Baz Luhrmann brought to life the world of excess and luxury that F. Scott Fitzgerald imagined in The Great Gatsby, from towering mansions on Long Island to Manhattan speakeasies. Here, Fitzgerald’s vision of Daisy’s parlor is realized: “A breeze blew through the room, blew curtains in at one end and out the other like pale flags, twisting them up towards the frosted wedding-cake of the ceiling, and then rippled over the wine-coloured rug, making a shadow on it as wind does on the sea.”

“Hughes was one of the richest men in America. We couldn’t decorate his house and office with props, so I worked for three months in Los Angeles rounding up the very best objects, furniture, painting, fabrics and antiques,” set decorator Francesca LoSchiavo told Architectural Digest.

Baz Luhrmann has become known for creating incredibly visual films, and Moulin Rouge is certainly no exception. From Bollywood performances to Satine’s ornate Parisian boudoir, the sets are fantasies come to life.

When the Titanic plunged into the deep, an architectural gem was lost as well. Director James Cameron and his set design team recreated early 20th century luxury with the lavish interior of the movie’s RMS Titanic.

Twentieth-century colonial Africa is the backdrop for this Meryl Streep, Robert Redford film. The movie sets elicit such a vivid picture, that it’s still relevant today. Out of Africa is one of the inspirations for Taylor Swift’s “Wildest Dreams” music video.

A musical set in Nazi Germany may seem counterintuitive at first, but the movie sets manage to evoke all the glitz and glam of a cabaret show while maintaining the darkness of the subject matter.

Turn-of-the-century opulence oozes from the sets of Hello Dolly, which takes place in Yonkers and Manhattan, New York.

Recreating Moscow while filming in Spain is a feat in itself, but an ice palace made of frozen beeswax that somehow manages to look beautiful deserves the praise it got.

You can’t turn a street urchin into a duchess without the proper setting–even if that street urchin is the elegant Audrey Hepburn. My Fair Lady’s sets depict the wealth of London in the early 1900s with lavish furniture and décor.

A dark, haunting take on the fairy tale, Pan’s Labyrinth’s ability to turn whimsical sets into frightening scenes too was nothing short of captivating.

The ultimate queen, Elizabeth Taylor’s Cleopatra spends time in gilded chambers with her maids. Cleopatra is one of the most expensive films ever made, and that fact is apparent in the ornate sets that depict the life of Egyptian royalty. According to Architectural Digest, the 70+ sets that John DeCuir designed earned him the nickname “Hollywood’s DaVinci.”

Seville’s Hotel Alfonso XIII (pictured here) was one of the filming locations in Lawrence of Arabia, and the cast even stayed at there for a few months. The hotel has gone through a restoration in recent years, but it still emanates a magical element unique to old-world Arabic design.

Parisian high society had style at the turn of the century, and Gigi showcases it with lush, colorful, and ornate interiors.

The King and I created a world fit for the King of Siam, including this whimsical hot pink room.

And now a look at this year’s nominees…

the revenant – 2016 nominee Since the story takes place in the woods, the production team for The Revenant had to harness the wilderness to create beautiful and terrifying cinematic landscapes.

Ridley Scott’s The Martian imagines what life would be like on Mars–both the hardship and the breathtaking scenery.

If you’ve ever wanted to know what apocalyptic Australia would look like, the production design team of Mad Max: Fury Road paints a pretty good picture.

1926 Copenhagen is brought to life with ornate and colorful sets in The Danish Girl.

Bridge of Spies recreates the Cold War-era streets of New York filled with cars of the time and artful building facades with an result that’s transporting.