The LoveShackFancy Office is a Lacy Dreamland

The lifestyle brand founded by Rebecca Hessel Cohen debuts a new Chelsea showroom as a home away from home. 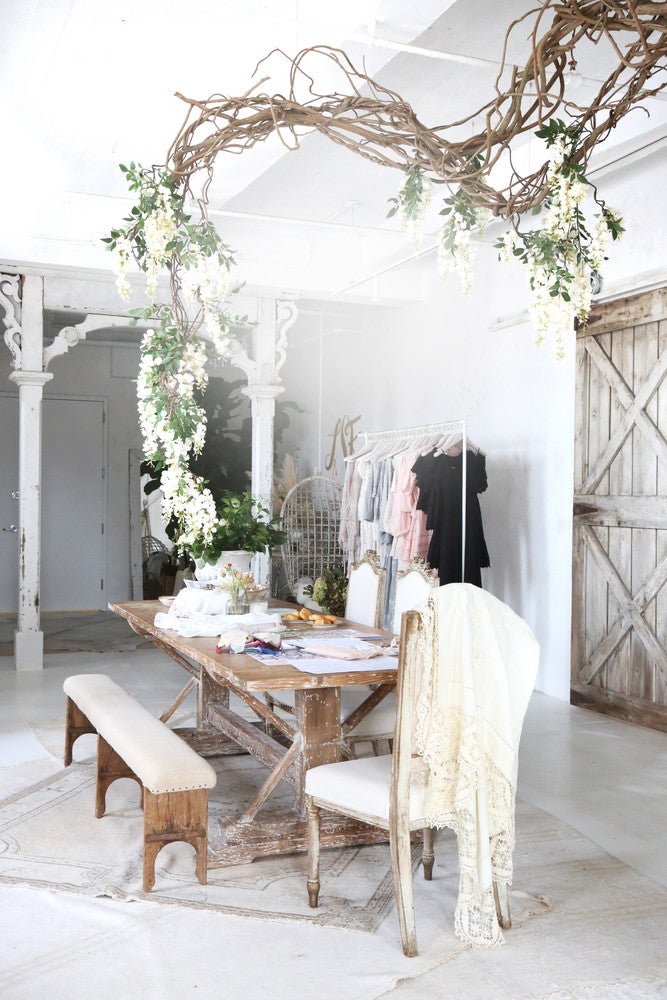 LoveShackFancy founder Rebecca Hessel Cohen has transformed a former artist’s studio in Chelsea into a dream-like space and backdrop for her boho-luxe fashion brand for women and kids. After serving as artist Edwin Cohen’s studio for many years prior, every inch of the walls and floors were completely covered in paint—so much so the designer could barely make out the space on her first visit. But the water views, natural light and energy were ideal. Enlisting the help of architect Patricia Tramullas from PHT Design (who’s also overseeing the renovation of the designer’s West Village townhouse), Hessel Cohen gut renovated the space and repainted it white to create the ideal foundation for the brand’s headquarters. “This building is the perfect location for us, and it has a great mix of fashion brands and gallery spaces,” Hessel Cohen explains of the corner space the brand moved into in July. “When I walked in, I knew it was the perfect fit, and we could transform it into a little haven.”

Taking inspiration from country houses in the south of France, farmhouses in Sweden, and beach houses in the Hamptons, Hessel Cohen decorated the space with the help of friend Mike Moser, who is a decorative manager at Ralph Lauren. Using a mixture of textures, antiques, florals and a soft color palate of whites, creams, golds, and tans, the space blends luxury and warmth with ease.

The furniture was sourced from markets in Paris and the Brimfield Antiques Show and includes architectural elements such as glass doors, an entry portal from an early 20th century church, an 18th century Parisian side bistro table and Willy Guhl pots—every piece is seamlessly arranged with a story to tell. “When you walk into the showroom you feel like you are walking into our home, which makes it special,” she says. “It’s a peaceful escape from the hustle and bustle of NYC.”

The vibe is very beach house meets country meets south of France. A mix of

The perfect setting in which to show off LoveShackFancy’s gauzy maxi-dresses and beachy separates.

The large, twisting wisteria tree with real wisteria branches and faux buds and florals really creates the focal point of the expansive showroom. “Our idea is to hang different seasonal elements and flowers from it each season,” says Hessel Cohen. “Now we are doing holiday accents and hanging magical twinkle lights and mixing in gold painted florals. We wanted to bring elements of nature into the showroom, so having this type of magical tree felt right.”

“I wanted to bring in elements of the beach, of the country, of Paris, all the places I love and feel inspired by,” says Hessel Cohen. “White is always a beautiful backdrop, and we love to layer in different textures and fabrics. Vintage accessories and furniture like these 19th century Swedish chairs and loveseats are the perfect complement to the clothing.”

Decorative antique barn doors found at the Brimfield Antiques Show became structural and now separate the showroom space from the desks. “I wanted something open and airy—but we worked with a lot of antique fixtures to divide up the space.”

“I love a creamy dreamy world with lots of golds and whites and creams and textures,” says Hessel Cohen of her fashion line’s color palette. The designer’s mood boards include images of items found at Rebecca’s mother’s house in Bridgehampton like rolls of vintage lace, antique dishes and gold frames. Hessel Cohen also loves dried flowers.

Hessel Cohen’s office and the conference room are in the back of the space. She relishes the mix of European and American styles with elements from Paris flea markets and juxtaposing beachy, modern and country vibes.

“I bring my girls to visit as much as possible,” Hessel Cohen says of her two young daughters, Scarlett and Stella. “For them, it’s a whimsical dream world. They have all the space to run around, and all the clothes to play dress up. Hopefully we can continue to do more events like hosting Stella’s first birthday party in the space, as well, because it really lends itself to that.”

“I wanted a cool conference room that felt like a garden,” Hessel Cohen explains. This one features the designer’s favorite painting by Curtis Kulig, a white peacock, a Swedish chandelier, an iron desk from a Southampton estate, inspirational books, and

“We layer in sheepskin in the winter to bring in warmth, and then will bring in some more summery pieces during the warmer seasons.”

The brand now has nine full time employees. “I wanted a comfortable working environment for everyone with beautiful light and communal desks so people could feel inspired to collaborate,” she says. “I think it’s extremely important to be inspired in the space where you work.” Most of the office furniture was custom built and inspired by French country farm tables.