“What If We Designed a Kitchen for a Sea Captain?”

That idea was the start of this Seattle renovation. 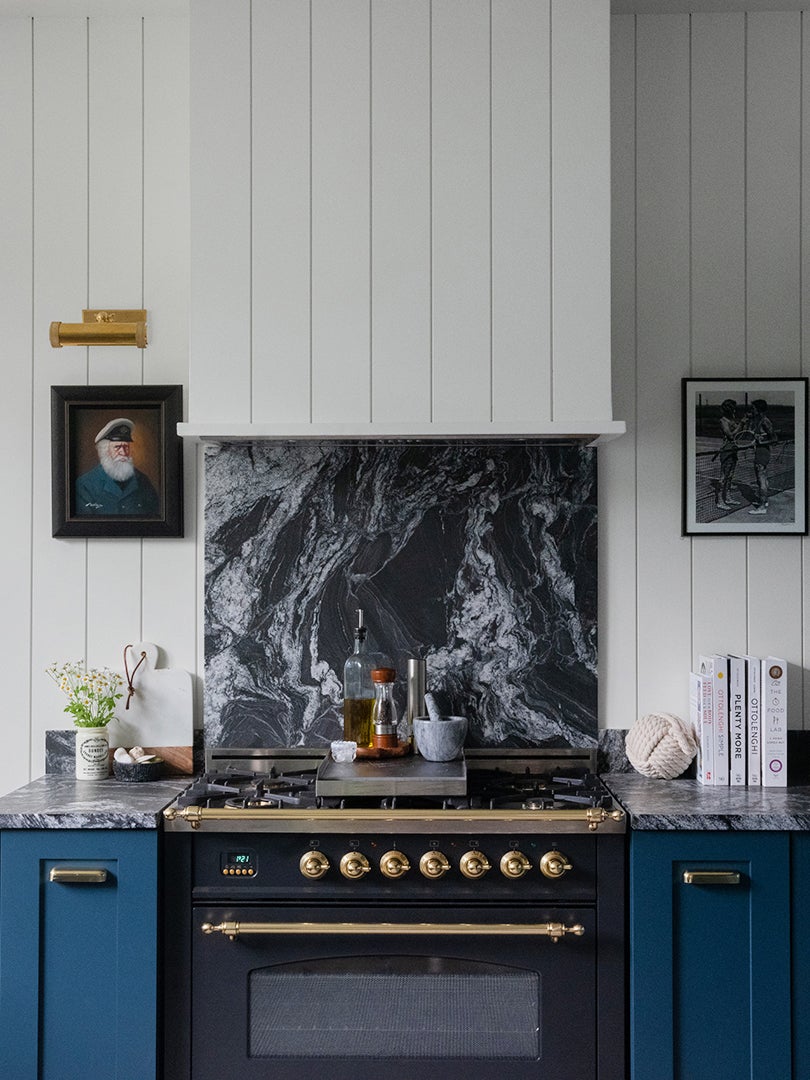 Keri Petersen was sitting at her client Julie’s dining table brainstorming plans for her kitchen renovation when she turned and saw a vintage oil painting of a sailor hanging on the wall. “What if we designed a home for this sea captain?” Petersen suggested. The designer and owner of KP Spaces wasn’t exactly sure what she meant by it when she said it, but as they worked through the vision, she began pulling moody paint colors and countertop options that seemed to match the vibe of the eBay-scored piece. “It happens to me a lot actually, where I meet a client and I’m drawn to a piece of art they have,” notes Petersen. “It’s a fun way to draw inspiration rather than just looking on Pinterest.”

It was a fitting starting point, given Julie’s house is located in the Sunset Hill neighborhood of Seattle, near Puget Sound. Her newly purchased home, which she shares with her dog, June, was built in 1904, but the cramped kitchen showed only signs of a circa-1990 renovation, with worn original hardwood floors and dated linoleum counters. Petersen kicked off the revamp by opening up the space to the adjacent dining-slash-living area (there was once a wall where the peninsula now is) and turning the back porch into a breakfast nook. “This house is really a story of the sea, that cycles between stormy and serene, all navigated by our trusty sea captain, who guided us through the whole process and carried us to home port,” shares the designer. Ahead, dive with us into the nautical reno.

Petersen went with new custom cabinets so Julie could maximize her storage in the small space (there are specialized drawers for holding deep pots and pans, pull-out lazy Susans in blind corners, and other ultra-functional touches). When it came to picking the color, the designer wanted something that was reminiscent of the Northwest waters. “I definitely didn’t want anything that had too much green in it or felt tropical,” she notes. The winning hue? Benjamin Moore’s moody Washington Blue. She topped it off with unlacquered brass hardware.

All Aboard, Textured Counters!

“This is not your grandparents’ granite,” Petersen says of the fresh countertops. The stone is leathered, meaning if you were to rub your hand across the top, it wouldn’t be smooth. “It’s got a wave to it almost,” she notes (but not to the point where you can’t rest a flat dish on top). The dreamy veining and movement is indicative of a stormy sea.

Instead of spending upwards of $10,000 on a fancy Lacanche or La Cornue range, Petersen hunted down this Ilve one in matte graphite for $4,200. The appliance is made in Italy and features a dual-function triple-ring burner, a storage drawer, and a defrost function. “It gave us the quality we wanted without the price tag,” she says.

What would a nautical-inspired kitchen be without some vertical shiplap? While the wall treatment has been a trending choice for a while now, in this case it wasn’t about embracing a fad. It makes you feel like you’re actually in a boat’s galley. “It will be timeless as the years go on,” says the designer.

The dilapidated back porch was the perfect opportunity for a breakfast nook. Incorporating the spot into the kitchen required taking off the door, bumping out the ceiling, leveling the floors for the new Clé tile, and adding insulation and all new windows to make sure the area was energy efficient. “It was an upgrade, but it’s such a great piece of real estate,” says Petersen. “It’s a place she can sit every single day with her laptop and coffee.”

The designer found a permanent home for the sea captain on the wall next to the range. “There was something kind of ridiculous and whimsical about having a picture of an old man in the kitchen, so I thought why not put an art light over it to make it feel really special?” she says. Aye, aye!