The Marvelous—And Horrifying—First Apartments of the Mrs. Maisel Cast 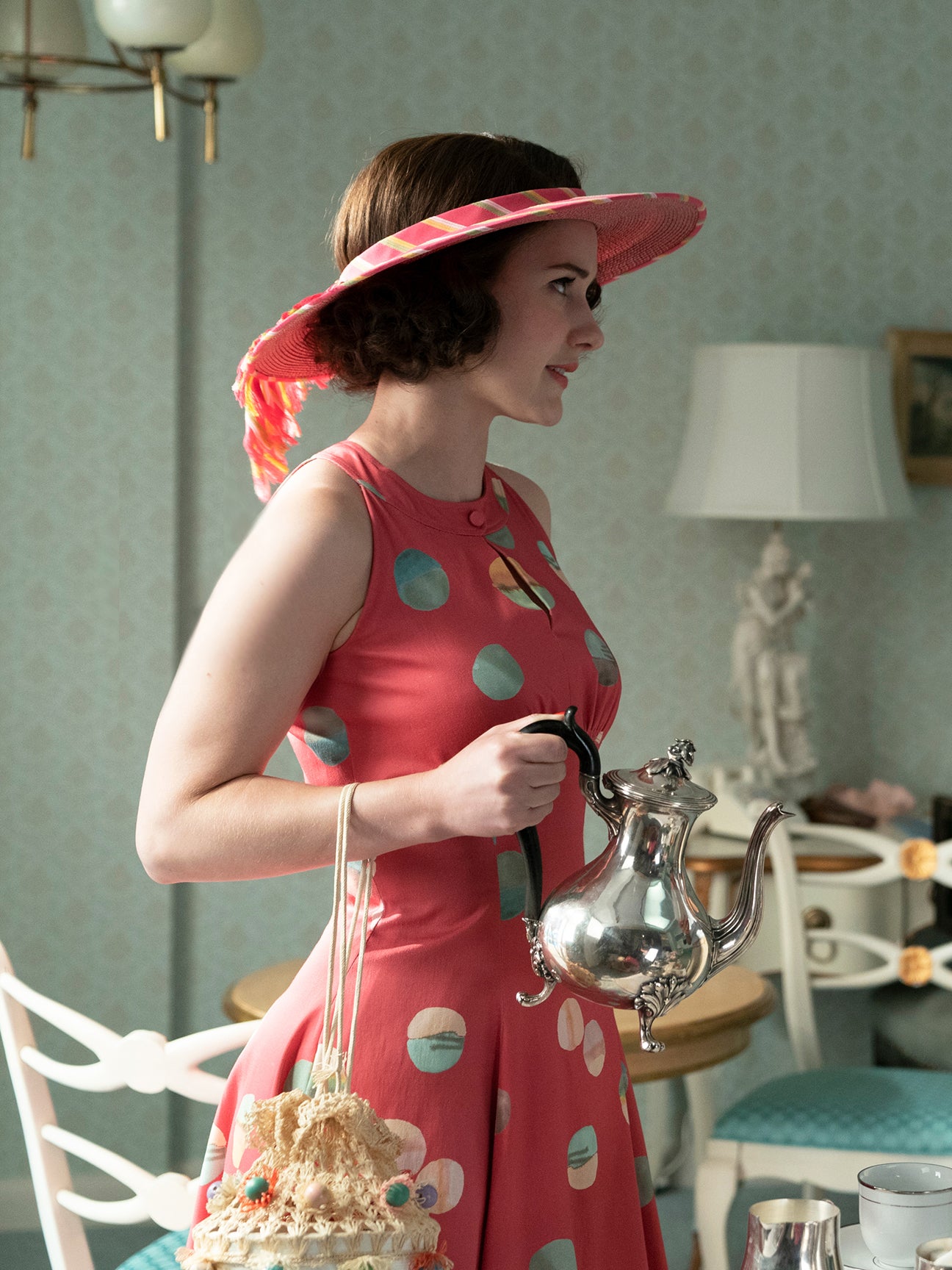 On The Marvelous Mrs. Maisel, we’re transported to a dreamy version of the 1950s, full of plush pastel coats, doting department store makeup-counter ladies, and sprawling Upper West Side apartments. But many people haven’t lived through this version of New York City—including the cast and creatives who make it. Living in a five-bedroom home with a baby grand in the office is not the norm, especially for actors who waited tables to pay rent.

When we caught up with the Maisel cast and its cocreators, Amy Sherman-Palladino and Dan Palladino, ahead of the series’ third season (which premieres today on Amazon Prime), they all had memorable tales of their first NYC apartments and how they definitely did not measure up to the Weissmans’ lavish home. But even the most harrowing tales—one involving roaches interrupting romance in the East Village—came with a hint of fondness for finding a space and making it their own, no matter how cramped or strange it was. Below, they share a glimpse at their first apartments and the essential items on their wish lists for the slightly bigger, definitely better homes they have now.

On her first NYC apartment: I found a funky little duplex right by Central Park West, owned by an older couple who was just looking for good neighbors. They basically said, “What can you pay in rent?” I remember that apartment very, very fondly. It had really small square footage but really high ceilings, and so it felt much bigger than it was.

On how her home compares to the one in the show: Midge’s apartment and my current place are similar in that they don’t feel precious. You can step on the rugs and touch the furniture. I love that even though you’re in a big, bustling city, you can have a sanctuary that feels like a home in some of those older apartments.

On what she looks for in a place now: I wanted outdoor space and I got it. It’s just a little spot on the roof, but the ability to walk outside in New York and breathe fresh air feels like the biggest luxury in the world.

On his first NYC apartment: I lived in Harlem on 123rd Street and it was the first brownstone on the block that had been renovated. There were four of us in a duplex on the first floor with a backyard. We had a basement where I hid somebody for two months who was not allowed to live there. We had a lot of fun there. It was back when people would go from Brooklyn to Harlem just to come to a party.

On how his home compares to the one in the show: Well, Joel lives in a factory now and sleeps on a couch. I have an old couch that I’ve had for 15 years now, and people who haven’t been to my place for a couple of years will be like, “You still have this couch?” It’s all frayed and I’ve talked about reupholstering it, but it costs $2,000.

On what he looks for in a place now: A view is nice. It doesn’t have to be a cityscape or anything. I like the view that I have now. I just look out onto Seventh Avenue and I can see people walking around on the sidewalk and everything going on in the neighborhood.

On her first NYC apartment: Shooting Maisel was the first time that I lived in New York. My place in Brooklyn has a few levels, but it’s teeny-tiny and very, very narrow. It feels like you’re on a ship or a little submarine. And it feels very vintage. There’s a lot of wood and a lot of cool, floral-striped wallpaper and stuff like that.

On how her home compares to the one in the show: Even in my college days, my dorm was nicer than Susie’s apartment. Susie doesn’t have a closet. The toilet doesn’t have a door, it’s just a wall partition. So that would be a little bit rough. I’ve never lived in squalor, but I do live simply with IKEA furniture. I have small kids and there’s just no point in trying to maintain something fancy. Why spend your money on a beautiful couch that’s going to have crayon and slime on it?

On what she looks for in a place now:  It has to have a bathtub, always. My apartment in Brooklyn has a big claw-foot tub, and it is always at the top of my wish list.

On his first NYC apartment: I first moved to the city back in the mid-’80s and I was on the top floor of a brownstone in Fort Greene, Brooklyn, when it was not the Fort Greene it is today. It was a fourth-floor walk-up, a cool little one-bedroom with a lot of character—and a fireplace.

On how his home compares to the one in the show: We live on the Upper West Side, but our apartment is about half the size of mine on the show. I wish I could take the whole office and the baby grand and tack it onto our place.

On what he looks for in a place now: One of the things that was important for me was a really nice lobby so that as you’re leaving and arriving every day, you just have this welcoming feeling. Another thing is the bathrooms. I’ll turn on the shower when I go into a home to check for good water pressure.

On her first NYC apartment: I lived in a bunch of apartments in the East Village in the ’90s, where it was just a bunch of kids living on top of one another in bunk beds. I once had a guy over who I thought was adorable and charming. We were eating Chinese and moved to the futon to a position that would be better for lying down. Somehow, it jarred all the cockroaches and they came running out. The guy was like, “Okay. Thank you very much. Gotta go.” I think that accurately describes a very crappy New York apartment moment: Chinese food and cockroaches.

On how her home compares to the one in the show: The apartment I rent now is right by Riverside Park, where Rose and Abe’s apartment was. So when I walk outside, I can be transported back in time in my head and feel like I’m actually living in Maisel land.

On what she looks for in a place now:  My husband and I rented a bottom floor of a duplex for 10 years that had molding similar to Maisel molding—not too perfect and worn-in with some cracks. If something has history, I feel more comfortable than if it is something modern, pristine, and clean.

On their first NYC apartment (Amy): We got our first place 11 years ago in the West Village, a little rental on Bleecker Street. It was right across from Magnolia Bakery, so we would watch until the line died down, and then Dan would run and get us cupcakes. It was our first time living in New York and we said, “We’re not going to worry about the price. Let’s just get a great apartment in a great location so we can really experience what it feels like to live in New York.” It was charming and old. The floors were on a slant, but [the apartment] had also been renovated with a perfect kitchen with a glass-door fridge, so we spent a lot of time lining up all our things so they looked good in the f—ing fridge. But it was so tragically expensive. We had to sit down for a few minutes when they told us the price.

On how their home compares to the ones in the show (Dan): We lived in a crappy apartment while we were renovating our current place in Brooklyn Heights. The landlord was a dick; there was no electricity in the bathroom; it was a little dicey; and the stairs were all really scary and narrow and weird. That’s the closest we got to a Susie Myerson apartment.

On what they look for in an apartment now (Amy): We just need to be able to have book storage. Home is where the books are.

Dan: There’s one place in the house that’s called creepy Grandpa’s, because it’s supposed to be where Grandpa hung out and read. And died. There’s one chair. It’s covered with an American flag. There’s a vintage radio playing from a Sonos speaker that’s hidden behind the books. It’s like Disneyland for book lovers.

See more stories like this: Amy Sherman-Palladino’s Official Guide to Holiday Party Survival Rachel Brosnahan Doesn’t Want You to Use Coasters in Her Apartment This Ballet Dancer Falls Asleep to Reruns of “The Office”