She lets us into her home library. 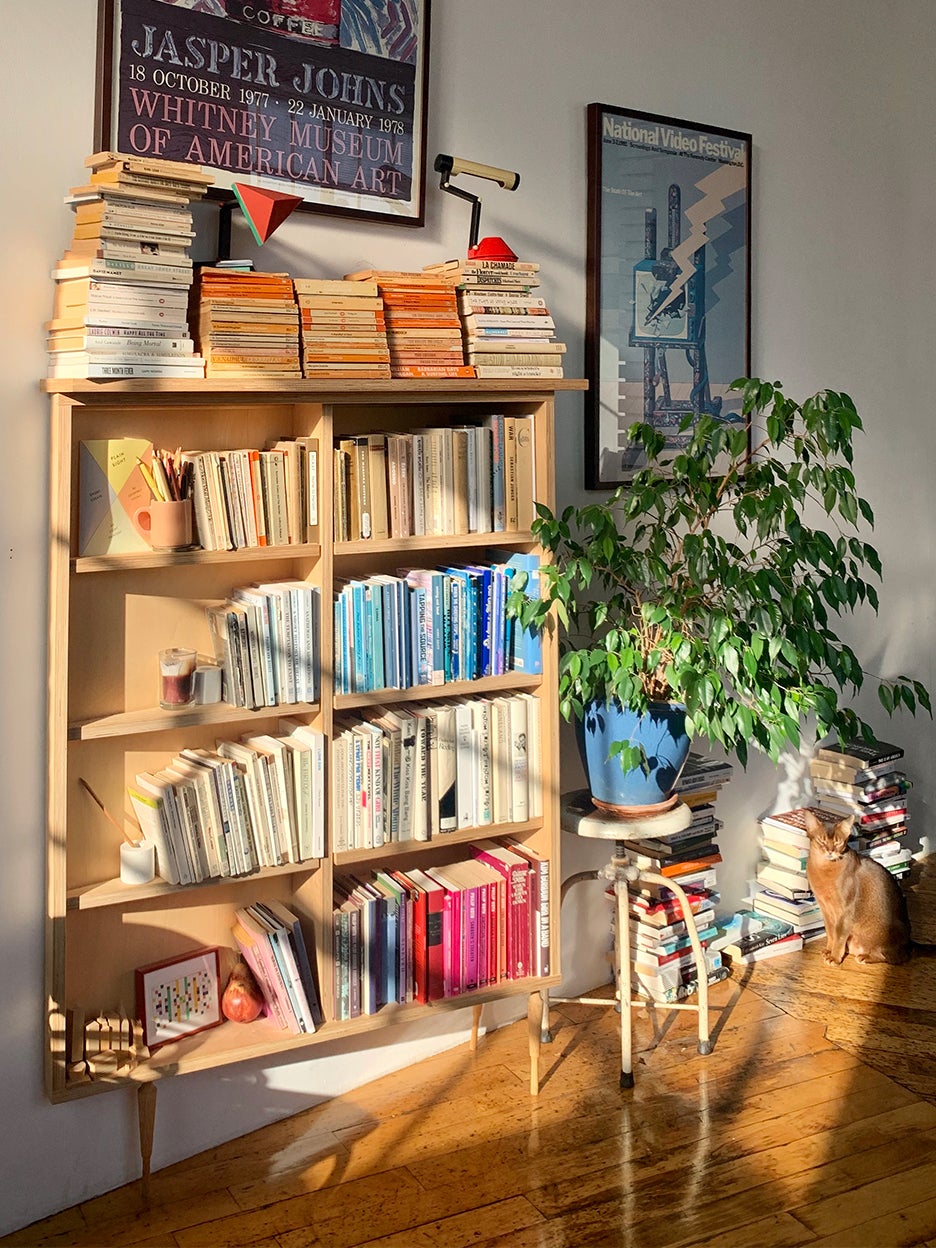 “The way some people would have to make their house childproof, I have to make my home book welcoming,” says Molly Young. “Having a giant quantity of books that I need to accommodate is always the central problem of my apartment life.” As the literary critic for New York magazine, she is constantly drowning in paperbacks and new galleys, as well as older, out-of-print delights that she orders on eBay. So it’s only natural that the Brooklyn loft she shares with her husband, graphic designer and director Teddy Blanks, is designed with shelving, good reading light, and excessive stacks of novels in mind.

After all, Young sees her books as the main character of her home—the rest is all supporting. She gives them pride of place in a variety of locations: On her custom-made three-legged bookshelf, in her yellow ’80s storage system, and in (somewhat organized) stacks all around. “Being a book critic doesn’t pay a ton of money necessarily, but being surrounded by unread books makes me feel immensely wealthy,” she says. “I feel like Scrooge McDuck diving into a pile of gold coins when I face a stack of books that are unread, simmering with potential.”

Here, she shares how she finds her best book recommendations (a Google Sheet is key), her daily reading routine, and why she still swears by color-coding.

Before the pandemic, I was very strictly organized. Because of my job at New York, I have an endless stream of books, and I have to be very disciplined about the pipeline so that it doesn’t become overwhelming and turn our flammable apartment into an even more flammable apartment. So I have stacks, and I organize the stacks by the month of release date. I usually have a Post-it on the wall for each month, and I organize the books under the Post-it of the month that they’re coming out. But that all went to hell, along with so much of my life, in March—now it’s just unruly stacks absolutely everywhere. I am disorganized, and I need to reform my chaos.

A Three-Legged Bookshelf for Uneven Walls

My husband had a friend of his make the three-legged bookshelf. We live in this weird loft—one of those rare rent-controlled, definitely under-code, definitely flammable Brooklyn buildings that you hear about but don’t see very much anymore, and my husband has been here for more than 10 years, so I got grandfathered in with him. Because of the way the building is carved up into these units, there are a lot of irregularities, and one of them is that the wall is extremely slanted. It doesn’t hit the other wall at a 90-degree angle. Teddy had the idea to have his friend who’s a furniture-maker create this three-legged bookshelf that would make it appear as though the wall was straight even though it’s not. It’s not a staple piece of furniture, because it has to be bolted to the wall—it’s the ultimate site-specific bookcase.

It’s viewed as very corny now, but the books on that shelf are color-coded, which was something that I always did. I’ve had so many books in my professional life, and it helped me find them because I can clearly recall the color of a book more than its location. I feel a little bit silly because it’s become a design trope, but it’s useful to me. I understand the objection to it, because I guess it’s that you’re treating a book as solely a design object and not as a reading utility, but I don’t think there’s anything wrong with people using books as design objects if they want to.

Used Books Have a Special Magic

I just love used books. I love finding little annotations in them, and the covers are so beautiful. As a kid, I lived a few blocks away from this legendary bookstore in San Francisco called Green Apple. My routine after school was: I would get out, get some shrimp dumplings—which were three for $1.20, very affordable on my allowance—and then I would go to the bookstore and wander around and sit in the used-books section and look at the sexy books with the naked people in them. Just having the opportunity to be in a place where I could exist among these collected thoughts of thousands of people from every corner of the world. I took it for granted at that age, but none of us can take it for granted now. If I don’t buy books used, I usually buy them on bookshop.org, which supports independent bookstores.

The Best Recommendations Are in Google Docs

I’ve never really found that reading book reviews is a great way to find my next reading material, which is ironic because that’s exactly what I do. When I signed on to be the literary critic for New York, I was trying to think of ways that I could open up the stream of input that I was getting, and I made this public Google Sheet where people could recommend books to me and to one another anonymously. When I first put it up, I was a bit worried that, like anything on the Internet, it would get filled with abuse, but so far it’s remained pure. I go to that sheet constantly and write down books. One of the recent recommendations I really liked was Bunny by Mona Awad. This is what the anonymous person said: “It is set in a creative writing M.F.A. program. This novel is like Girls mixed with Fight Club. I think I stole that from the cover blurb, but it’s so appropriate.” It’s this fantastic sex- and -blood-filled campus novel that takes place at a loosely concealed version of Brown University.

The Book She Recommends to Everyone

Recently, it’s been Priestdaddy by Patricia Lockwood. Mostly because it’s a book that I never would have picked up based on the fact that it’s a memoir written by a young poet. But her mind is so sparkling and strange and unique that it was like tasting a new flavor—I had never read anything like that. It also felt quite universally appealing. That’s not necessarily a trait that is good in most books, but this one manages to maintain its bizarre singularity while also capturing the attention of basically everyone I’ve recommended it to, which is a very wide range of people.

The Importance of Paring Back

I’m always trying to get books out of my house because if I didn’t, I would end up blockaded in my apartment. Sometimes I give them to my neighbors; sometimes a person will email me and say, like, “I really want this book you recommended, but I can’t find it anywhere.” And so I’ll mail it to them. Sometimes the library has book sales, and you can donate books for that. I’m always trying to devise clever ways to dispose of books without wasting anything. If you told me when I was 10, that at the age of 33, I’d be actively trying to get rid of books, I would have been like, “Excuse me, ma’am.”

How She Finds Time to Read Them All

I probably read for three hours a day and I always read with a pencil in hand and Post-its to scribble down some notes. I layer it throughout the day. I’m lucky that it’s my work, but it’s also what I do for recreation. The only time I can’t read is before bed because it will make me fall asleep. I like to lie down on the floor and have my legs resting against a chair or something. I like to have at least two beverages with me, preferably one hot and one cold—maybe a coffee and a cream soda. I find that it helps to not be sitting at a desk when I read because of momentum. If I’m at a desk, my little fingers start to want to check my email and do bad things like that. I do sometimes even turn off my phone, and that helps a lot. If I can kill the phone and turn it into this black object that has no grasp of my attention, then I’m much better at reading. There’s an on-ramp to reading—I think for most people, you can’t really sit down and immediately get in the zone. It takes about 15 minutes to power down your lizard brain that’s besieged with distractions, and only then can you really get into it.