The founders of London’s 2LG Studio took their space from overgrown to avant-garde. 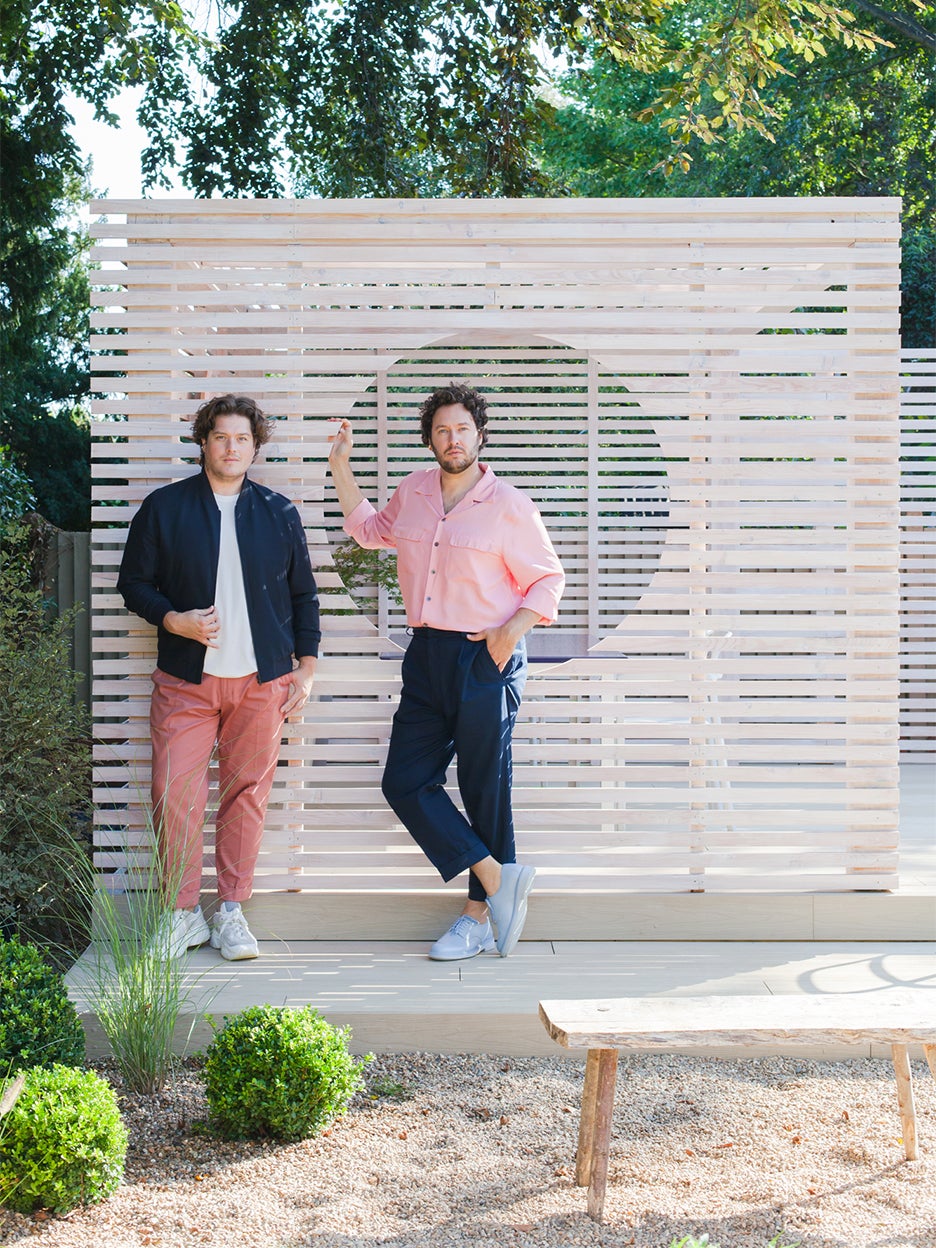 Jordan Cluroe and Russell Whitehead, founders of design firm 2LG Studio, hope to do more than host barbecues in their newly revamped South East London backyard. They want to get married there. “It was one of the main driving factors behind the pavilion,” says Cluroe. The couple has been civil partners for nearly a decade, but now that same-sex marriage is legal in the U.K., they’re aiming to make it official official on their 10th wedding anniversary this summer (COVID restrictions permitting). “What better place to have a party once we are allowed,” he says.

Their to-be venue is a far cry from the overgrown lawn it once was. When Whitehead and Cluroe first toured the property, they couldn’t even see what was happening in the back half of the garden (to their surprise, there was a beautiful apple tree hiding there and plenty of space for vegetable beds once they cut the shrubs back). The designers originally toyed with building a fully covered outdoor room but opted for a pergola with half a roof instead. “As Brits, there is a joy about a sunny day bringing us out into the garden,” says Cluroe. These additions made it fit for dancing, dining, and, one day, “I do’s.”

Cluroe describes the demolition as epic. “There was a digger involved at one point,” he recalls. They didn’t expect all the concrete back there, plus most of the root balls proved tricky to remove with just a handheld shovel. “It involved a lot of sweat, laughter, and muddy feet,” he says. While it’s one of the main reasons the project ended up taking around three months to complete, it kept them busy and distracted during London’s lockdown.

Measuring 32 feet across and 16 feet deep, the pavilion is plenty spacious for yoga sessions and cookouts. The flooring is made out of a hard-wearing, stain-resistant recycled material board called HD Pro by Composite Prime. “We didn’t love the idea of having to scrub the deck every time we wanted to use it,” says Cluroe.

Everything else is larch, a relatively affordable species that the pair treated themselves after it was installed with a Protek sealer and whitewash stain to mute its natural pink tone. “We listened to several operas and Broadway musicals that week. Our neighbors got a new insight into our musical tastes,” says Cluroe, laughing.

Frame a Fresh Point of View

Tim Burton’s Beetlejuice (one of the couple’s favorite movies) was the inspiration for the structure’s oversize trellis and round cutout. “This is more of a minimal approach, but it’s in the DNA of the design,” says Cluroe. To achieve a near-perfect circle, they installed the slatted wall using screws (not nails) and then put a piece of circular plywood up against the surface where they wanted the window to be and traced the outline with a pencil. Then they unscrewed the boards that would need to be trimmed off with a jigsaw and cut each one accordingly.

Unlike the other slatted walls, the trellis is intended to be a playground for their three vining white jasmines. Most of the other greenery there serves the kitchen—the gravel pathways offer easy access to the raised beds filled with veggies and herbs. Other must-plant seeds this spring: dahlias and a rare heritage squash called Pink Banana. “If 2LG designed vegetables, they would like that,” jokes Cluroe.

While the pendant lamp over the dining table is actually hardwired (the couple luckily planned ahead one day and had the outdoor power supply added while they were rewiring the interior of their house), the globe fixtures nestled in the apple tree are solar powered, as are the ground fixtures that light the paths in the evening.

The pair splurged on a pink marble coffee table they collaborated on with Solid Nature, along with various other yard sculptures and 3-D wall art by Atelier Bebop made out of stretched outdoor fabric. These additions deliver a layer of extravagance, texture, and color to an otherwise neutral space, says Cluroe. Another bonus: They won’t have to spend as much on wedding decorations—everything’s already there.