Some lead to bathrooms, others down hallways. 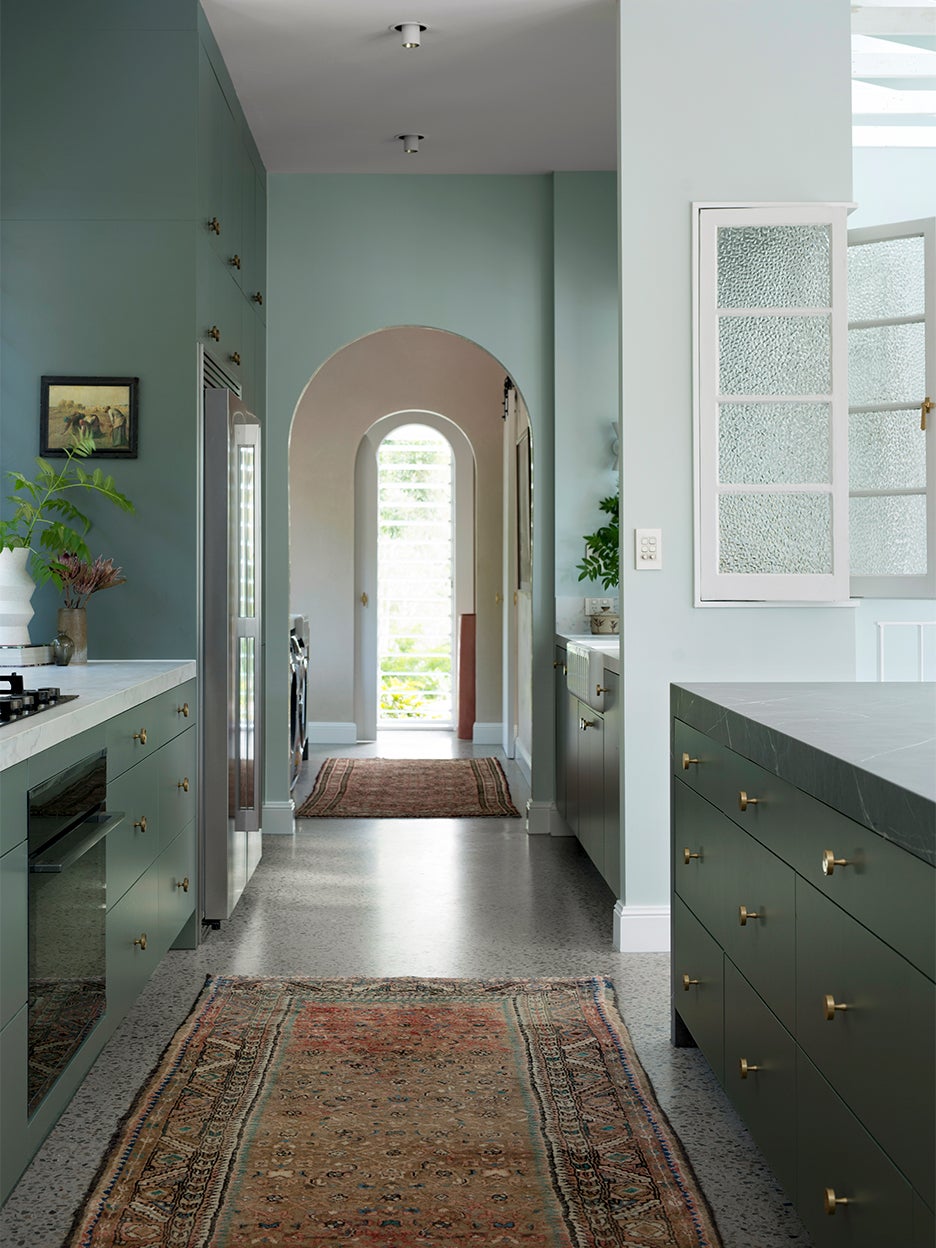 “It felt like coming home,” Carlene Duffy recalls about the first time she and her husband, Michael, drove through the rural streets of Tallebudgera Valley, Queensland, Australia. They passed fields of cows and horses and lush gum trees until they pulled up to a property that was essentially a concrete slab wrapped around a swampy swimming pool and an uninhabitable structure. (The place was originally built in the 1970s as a clubhouse for a health retreat, but it had recently been ravaged by a fire and abandoned by its last owner.) “Beneath that slab was destruction—mold, mess, the works,” says Carlene. So the couple offered $100,000 under the asking price. “Only optimistic fools like us would be interested in it in the first place.”

That was in 2009 when they were both 27 and their two kids were tiny. The couple wasn’t financially equipped to tackle the construction at a decent pace (they couldn’t get a loan for a mid-renovated property), but they were never idle. Together, they own a design-renovation company called Cedar + Suede, so remodeling is their bread and butter. After a substantial cleanup, they chipped away at the place, only saving the concrete foundation, the driveway, and some internal stairs. But it was in the past four years that they really picked up momentum. “There’s no way I would have had the confidence to create what we have today at the very beginning,” says Carlene. Soaring arches and saturated wall colors go to show that slow and steady really does win the race.

Carlene is by no means scared of color, but when she selects paint, she does so with longevity in mind. This translates to rich and deep hues rather than bright ones. The slate green kitchen cabinets are something she’s sure she won’t tire of. “It has the sophistication to stand the test of time,” she says. So do the handmade zellige tiles that make up the backsplash (the feature she considers her biggest splurge). “They create beautiful movements and really are impactful,” she says.

The nearby interior windows, salvaged from a 1950s Queenslander home, make up for the pricey tiles (the Duffys were originally considering white steel-framed windows before they found these). The textured glass filters light into the pantry and office, while also disguising any messes that may lie within from public view.

To break up all the straight lines in the home, Carlene added a curved banquette to the side of the island with a round dining table, to boot. The idea came to her after seeing Naomi Watts and Liev Schreiber’s former New York apartment. “It’s a hot spot,” she says. “In addition to eating here, we play a lot of card games.”

The Shape of Things

The couple leaned into rounded profiles elsewhere in the form of arched doorways and fireplaces, as well as a tubular Concrete Nation pedestal sink, found in the powder room. Not pictured: brushed Swiss brass flush plates above the toilet. “Every detail counts,” she says.

A simple polish brought the existing concrete floors back to life (in some spots, the couple uncovered a beautiful river stone). The material only worked in the end because it’s located in areas that receive direct sunlight, so it never gets overly chilly. “That’s the last thing you want for a home,” says Carlene.

A spiral staircase connects the TV room to a loft bedroom space, an area that gets a ton of use from the Duffys’ daughter and their niece. “They run their ‘day spas’ out of there, and it’s a little pricey if I’m being honest,” she  says, laughing.

Occasionally, Carlene will venture from the living room, where she’s been finding herself working these days, to the couple’s spacious office-studio. In addition to residential projects, Carlene and Michael host the home renovation and lifestyle shows Ready Set Reno and Open Homes Australia, so there’s always work to be done.

A Slice of Paradise

In both full bathrooms, tiny mosaic marble tiles cover every inch of surface space in the showers. The natural stone is porous, so Carlene is careful not to expose them to abrasive cleaning products. In the couple’s bathroom, ceiling-height aluminum partitions made by a local welder protect the hardwood floors and walnut vanity from moisture damage. 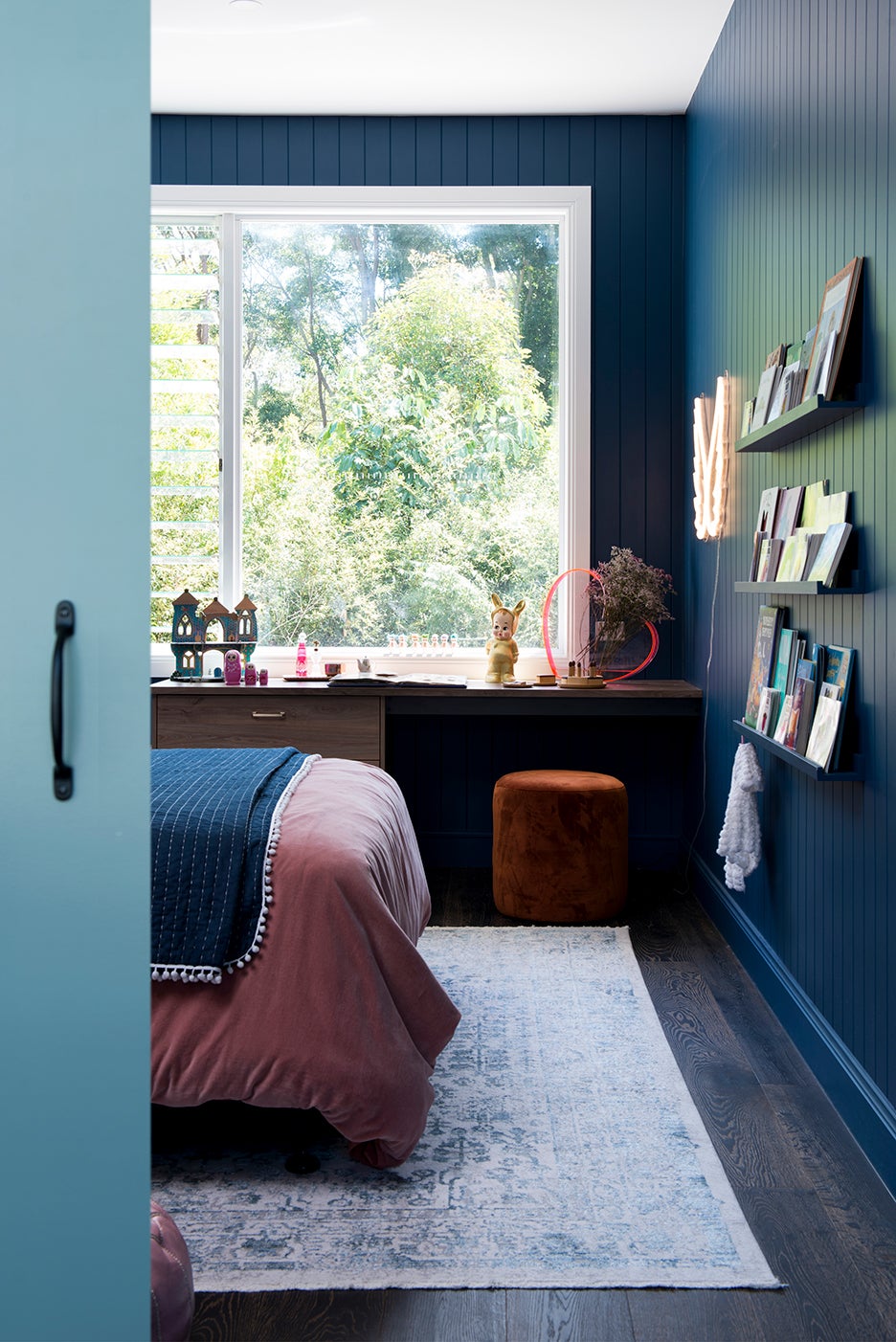 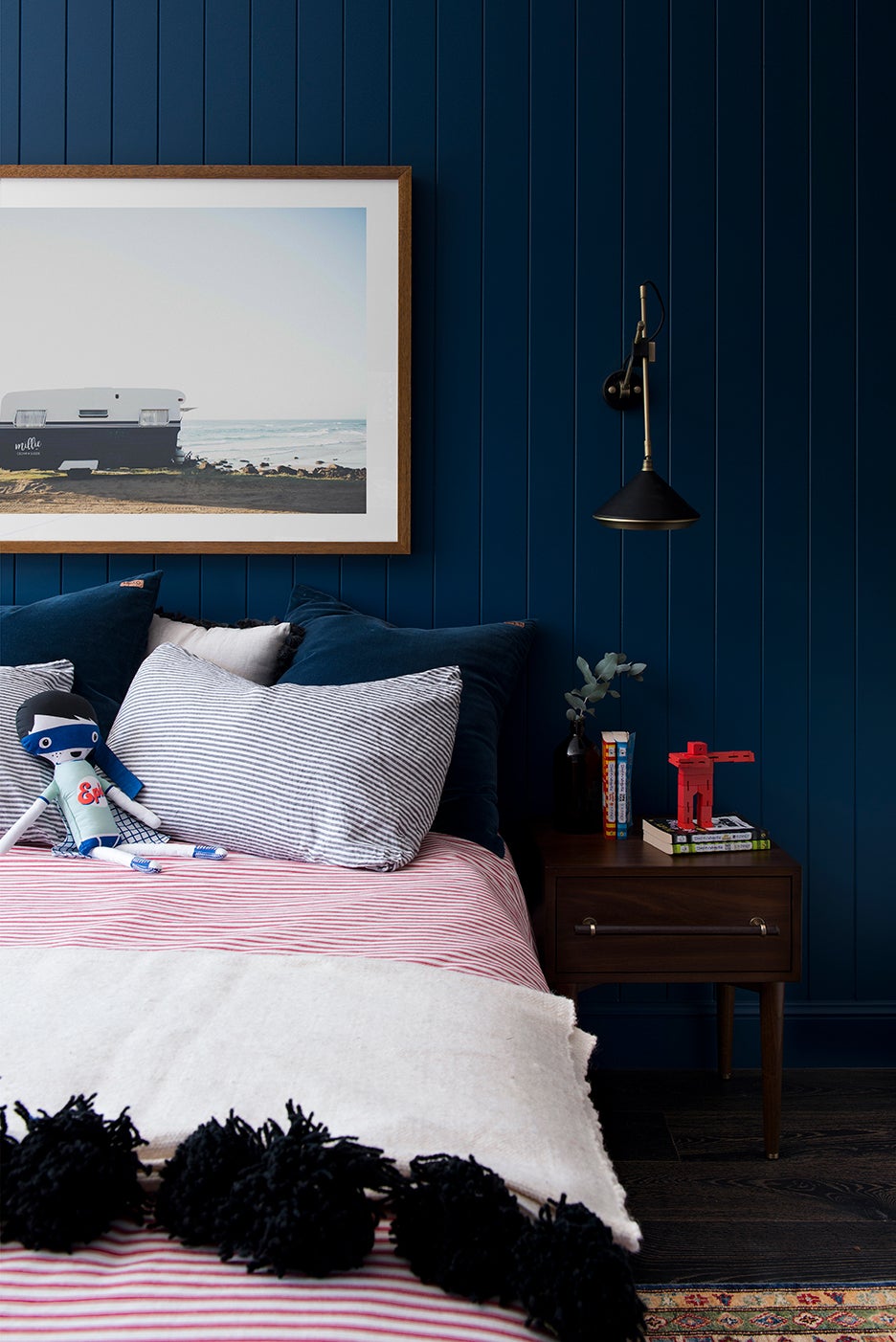 Carlene refers to the main bedroom as her haven. “It feels good; it’s quiet; and it has a beautiful view,” she says. Her only regret with the renovation is not carving off some space in their main bedroom to give to the kids’ rooms, both of which are now clad in textured paneling from Easycraft. “Kids play in their rooms, whereas we just don’t need the extra floor space,” she says.

A black house just makes sense for a lush setting: It looks as though it’s one with its surroundings, as opposed to a very white home, which can be harsh on the eyes. The Duffys’ facade, covered in EcoWall from Weathertex, as well as rough-sawed timber battens, were inspired by the Rodd and Gunn store in Noosa. “It feels like a modern barn, almost coastal to me,” says Carlene. “We’re fortunate to be flanked by big, beautiful, ancient gum trees, so it was important to us that we spotlight them.” Coming home is even more of a treat now than it was that very first day.

My go-to local vintage shop or resource: My favorite was the Gold Coast Antique Centre, but it closed down last year, as did two other local favorites. I might have to get used to Facebook Marketplace instead.

The object in my home that gets the most use: The Zip Tap—it’s boiling, chilled, and sparkling.

The textile in my home that is so me: The forest green velvet sofa in our TV room. I love velvet and jewel colors. It feels very English to me, and I’m heavily inspired by English interiors.

I loved working with: Concrete Nation, which provided our red iron pedestal basin. The Gold Coast, although a big regional town, is still a regional town, so it feels great to be able to utilize local talent.