Inside a Modern Home That Mixes US and Norwegian Design Styles

How an international couple makes a minimalist space their own. 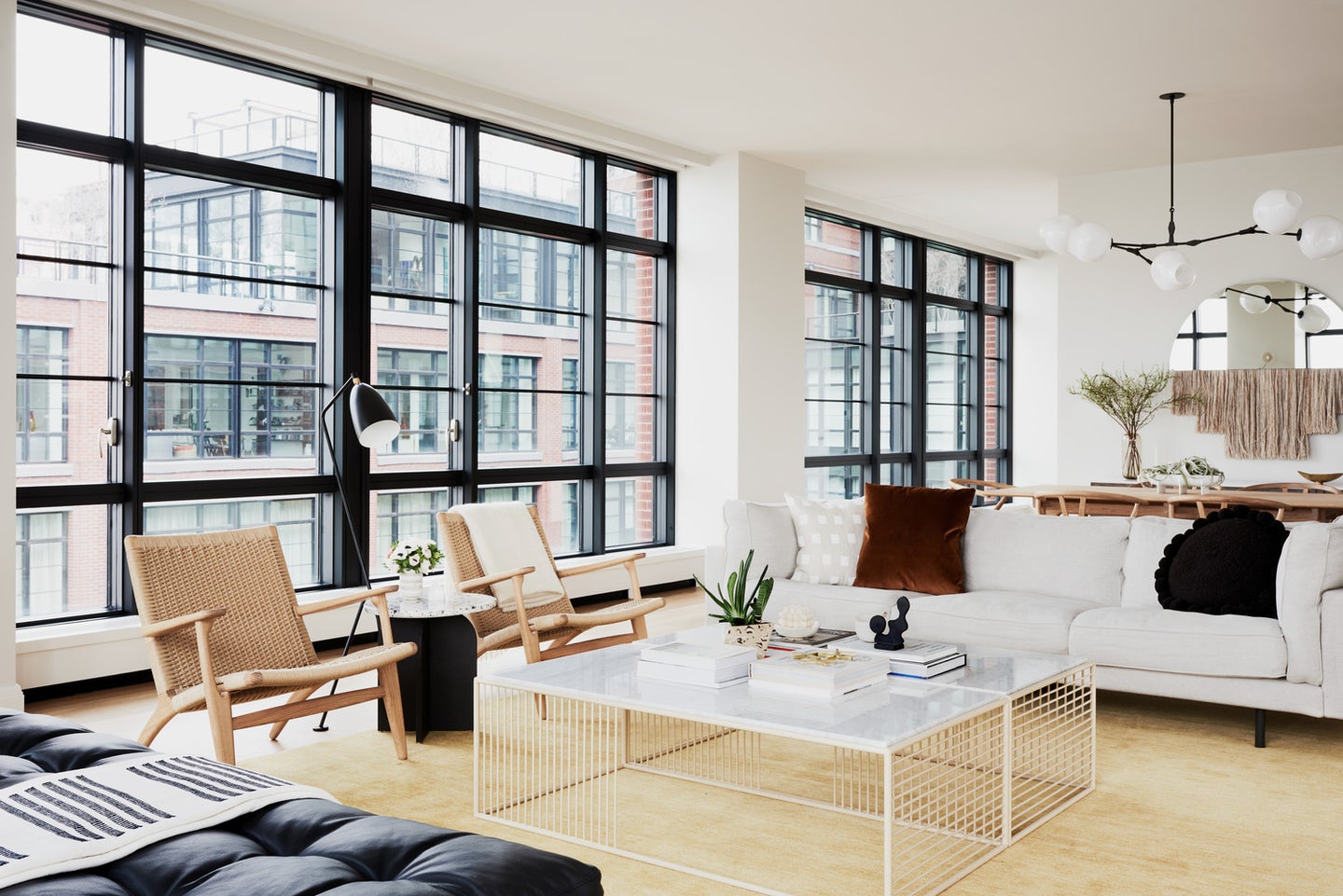 It’s easy to understand the recent appeal of minimalism and small-space living. For most, a decluttered space provides a calm, soothing atmosphere, and as your home is your only sanctuary from the hustle and bustle of daily life, a zen environment is key. The main issue, however, comes from creating a home that still expresses your personality in a fresh, interesting way.

A young couple with a new baby had that exact dilemma when they moved into a new building in New York City’s West Village. An international duo (one originally from New York, the other from Oslo), the couple needed a serene home that would allow for a comfortable space for both adults and baby.

“The focus was on materiality and craft, and a design that allowed both the architecture and the views of the home to shine,” explains designer Sheena Murphy of Sheep + Stone Interiors. By using a mix of light and dark, Murphy achieved a look that skews more minimalist but displays enough personality by way of accent furniture and a mix of textures.

“We always design with the whole home in mind, so that people can move things around over time, to keep spaces feeling fresh without having to buy more stuff. It helps to mix and match, and pick some classic pieces for longevity,” says Murphy of her design ethos.

In the living room, she worked on making sure the space had a strong neutral base, with accent pieces like a tonal gold rug, modern dark lighting, and bolder neutrals that would give the area an element of interest that doesn’t skew toward total Scandi-simplicity.

“When working with a neutral palette, it is important to mix and match materials and finishes, add texture, and play with shapes in order to keep the eye moving around the room and prevent the space from feeling flat,” adds Murphy.

The simple dining room is a prime example of this, with age-old, simple designs forming the center. The chairs and table, for instance, are clad in a finish that seems like an extension of the oak flooring—which is why contrast was key in preventing it from looking too one-dimensional. Visual interest was instilled in the form of a colorful, textured mirror, greenery to bring the outside in, and a dark yet neutral credenza.

Statement lighting was also a huge factor when it came to designing the home. As the space was blessed with several huge windows letting in natural light, too many fixtures weren’t really needed in the space—which is why for Murphy, they worked more as art. “It was still important that the clients had lighting that could adapt to the time of day or type of weather,” elaborates Murphy. “The decorative lighting in the space acts as both art and illumination.”

As for Murphy’s favorite room in the home? It would have to be the study, which also doubles as a guest room. While most people might be intimidated by the small space restrictions, for Murphy, it provided her with the chance to think outside of the box. “Because it had to function as a comfortable refuge for a guest, an efficient workspace for the clients, and a cozy place for TV watching and reading, it really was a balancing act,” elaborates the designer, who wanted the space to feel “cozy and cocooning.”

serves as a subtle way to provide extra storage and some more greenery, while a thick rug in a light color keeps the space feeling open. As the couch also doubles as a sleeper sofa, the coffee table had to be a certain size in order to not get in the way. Metallic accents and fresh artwork lend a playful feel, and the mix of light and dark keeps the area balanced and fresh.

“I’m really happy with the way this room turned out,” says Murphy. “We managed to tick all these boxes without making the room feel cramped.” The key was installing the mega desk and shelving, which led to the addition of 23 linear feet of storage without encroaching on any floor space in the room. By painting these elements the same color as the walls, Murphy was able to allow them to blend in.

A darker, moodier entryway and coat area was a playful addition that separated those spaces from the rest of the home. As the home was blessed with this long entry area, Murphy knew it had to serve a purpose: “The home was really lacking an area to greet people when they entered, so we created this as somewhere to put on and take off shoes and coats, and to do one final mirror check before braving the streets of New York,” she explains. A vintage rug and built-in millwork add more storage and a cozy feel to balance out those darker walls.

The kitchen and bathroom also played with dark hues—a deliberate choice, as the space would feel cohesive with several rooms in the same color palette. “You will notice that in most rooms in the home, there is some degree of high contrast—whether a larger piece of furniture or millwork or in textiles/accessories,” says Murphy. She made sure that despite the dramatic walls, the room stayed elegant and refined: “Clean lines were a must!” Modern lighting keeps things restrained, and white marble ups the glam factor.

The nursery, however, has a touch more whimsy to it and is the one space that Murphy really chose to play with pattern. “While we wanted it to feel special, we also wanted to keep it as cohesive with the rest of the home as possible, with classic shapes and a neutral palette,” explains Murphy. She chose the wallpaper specifically because of its mix of metallic touches with a cool, saturated hue—”The color, scale, and shapes felt like the right level of saturation and playfulness, while not deviating too much from the overall concept of the home,” she says. Natural materials, including everything from glass and ceramic to metal, stone, and wood, added to that organic feel.

“At the end of the day, these clients are busy professionals, both with demanding jobs, a young baby, active social lives, and busy travel schedules, so this home had to be a refuge for them,” adds Murphy. “It had to be a safe but fun environment for their daughter to learn and grow, and a place they could have friends and family visit without being worried about things being too precious.”