This NYC Bathroom Puts a Stone Spin on Traditional Wainscoting

Turquoise marble takes on the look of inset paneling. 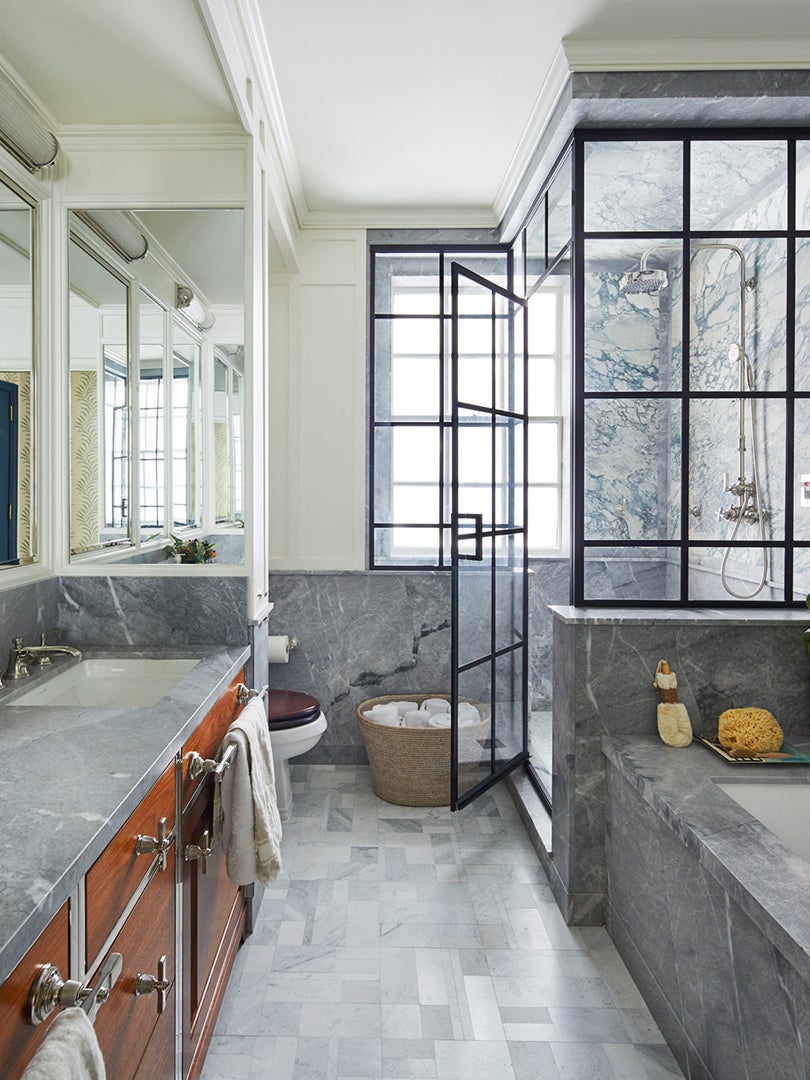 In some ways, New York City–based interior designer Jenny Vorhoff’s bathroom is really a bonus home office. While it’s not where she sprawls out fabric samples or calls subcontractors to see if they’re still on schedule, it’s where she and her husband, Robert, discuss all the things that are on the docket each week—travel plans, sporting events, who’s taking the kids to school, you name it. “It’s really where our family meetings happen,” says Jenny. So naturally she wanted the space to encourage a calm amid the hecticness of coordinating their family of six.

Architect Anik Pearson collaborated with Jenny on the large-scale renovation of the family’s apartment. And part of that process included redoing the main bathroom, which was formerly a “structureless space,” as Pearson puts it. “Even though the fixtures (tub, shower) stayed in the same place, we completely transformed it,” she says. The pair gave the room architectural interest and a sense of zen in one fell swoop with the addition of marble laid out like—get this!—wood wall paneling.

So what’s really happening? Large square and rectangular slabs of splurge-worthy Calacatta turquoise marble (at Artistic Tile, it goes for $110 per square foot) are framed by honed Blue de Savoie marble. The latter grayish-looking stone makes up the tub surround and trim work. “We kind of played with different articulations of that material,” says Pearson. By adding a raised border around the room (similar to what you’d see with traditional wood wainscoting), the architect created a cohesive look throughout.

The dramatic detailing was partially inspired by Jenny’s love of the Greenwich Hotel, which is located just down the street from their home. “We’ve started going there one night a year, usually on Robert’s birthday or for a little staycation,” says the designer. Many of the hotel’s bathrooms feature one tile, either a ceramic or stone option, all over the floors and walls. In her own space, Jenny went as far as cladding the ceiling in the shower in marble. “It’s so busy and gorgeous,” she says, noting how the veining of the turquoise variety makes it look like water.

The couple’s command station (aka the vanity) is also topped with the Blue de Savoie and features walnut cabinet doors, Hapswell hinges from Waterworks, and the company’s R.W. Atlas wing pulls. “This is an important space; we want it to feel good,” says Jenny. Walking through the day’s to-dos is now something they look forward to.