Nearby, a green marble dining table can host three generations. 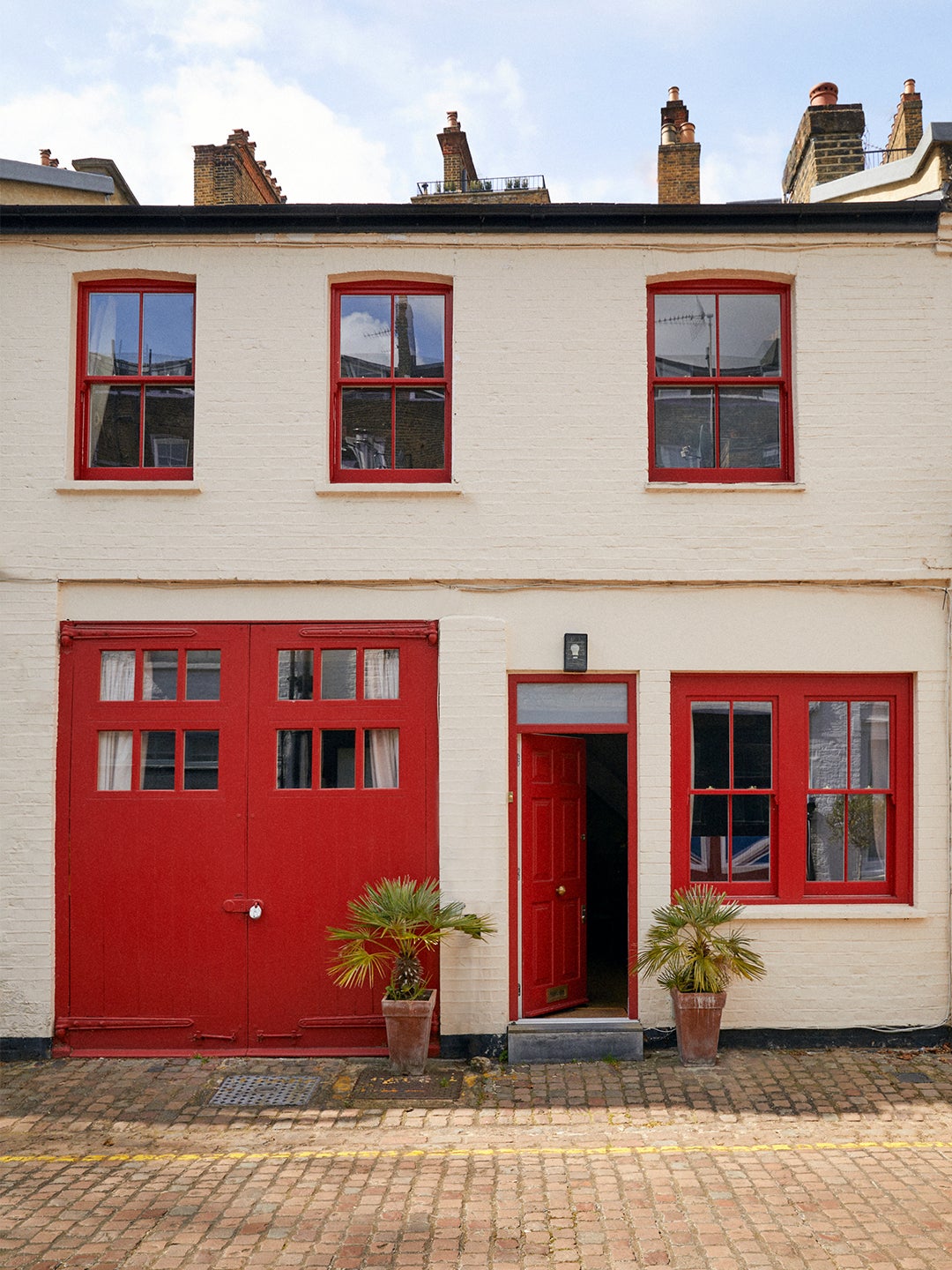 Back in the 18th century, London’s mews houses were less than desirable. The two- or three-story buildings, usually tucked away behind a grand mansion, once served as horse stables and later mechanic’s garages. Today they’re prime real estate. “They were overlooked for decades. Now everyone wants one,” says Angus Buchanan, creative director of design firm Buchanan Studio—and that includes his wife and studio cofounder Charlotte’s parents. The couple spends the majority of their time in Wiltshire, about a two-hour drive from London, but they wanted a place in the city where they could visit a few times a month to see Charlotte and her two sisters, plus their many grandchildren.

Angus credits their creative vision as the reason they scored the sought-after house in South Kensington in the first place. They could see what other potential buyers couldn’t. “Unfortunately, a developer had gotten their hands on it relatively recently and essentially white-boxed it,” he recalls. The vast blank walls were “completely charmless and extremely boring.” In other words, inside it was everything a mews house was not supposed to be. “It didn’t feel honest,” adds Charlotte. So in the spirit of creating a place where they could make new memories, the designers sought to bring back the past.

Removing bits of drywall got the pair off to a good start: They discovered old bricks and even a metal horse tie that were previously covered up. Angus and Charlotte also removed some built-in storage in what is now the dining room, not to reveal historic details but rather to make way for a massive dining table where multiple generations could gather over tea or lunch. It took seven people to carry the custom primavera marble top (chosen as a nod to Charlotte’s father, who has a passion for collecting minerals and fossils) into the house—it’s essentially a full slab, minus the corners they cut off to create curved ends. “My mom hates it when someone gets stuck at the end of a table on a corner, so she was adamant about that,” says Charlotte.

Still, the surface had to be mobile. Specially engineered cast-brass wheels allow the family to push it flush against a wall during large parties where people are eating buffet style and standing. But when guests are gathered around the table for a meal, there’s no need for placemats. From every angle, a fork or a glass looks good directly on top of it. “It’s that sort of marble you want to stroke,” explains Angus. The bespoke bench is topped with grandchildren-proof leather that can be wiped clean after the inevitable spill.

Adding traditional tongue-and-groove paneling to all the walls made the place feel truer to its roots, while also coming in handy for disguising the boiler closet in the living room. “I’m forever hiding boilers,” says Angus with a laugh. The designers continued to slightly cheat the makeup of a Victorian mews house by cladding the ceiling in salvaged rafter beams (they were sourced from an old school in Yorkshire). The wood around the built-in cabinet under the stairs has also seen some significant wear: They’re old cheese boards sourced from Retrouvius in Kensal Green. “It’s just this amazing Aladdin’s cave of timber chairs, furniture, fabrics, stones…all sorts of items from museums and estate sales,” notes Angus.

While the barn doors in the living room look like they open up to the brick-clad street, the threshold is an illusion (it had been bricked up long ago). It was a budget decision, really: Avoid spending thousands of pounds on opening the space up to the outdoors by keeping the awkwardly high windows and adding faux doors so the whole thing seemed intentional. Angus tapped into his set-design background to create a setup that looked legitimate. You’d have to look closely and spot the outlet cover to know the whole thing wasn’t real. “In your brain, you just accept this room opens out onto the street,” he says. Instead, when anyone wants to enjoy the fresh air, they can simply walk to nearby Hyde Park or pull a bistro table and chairs out into the alley. “Honestly, it feels like Paris,” notes Charlotte.

The small, windowless galley kitchen is a clear reminder that this house is still in a big city. The designers employed pink and red—a color combo they’ve grown fond of—and painted the premade cabinets and ceiling accordingly. “It took some persuading with my father,” says Charlotte with a laugh.

Committing to a bathtub over a shower in one of the home’s two full bathrooms didn’t take much convincing with her mother, though. “She’s a bath obsessive,” says Charlotte. The pair surrounded the soaking spot with a peachy pink marble, saving the off-cuts and turning them into open shelving. “It’s a fairly bombproof bath,” says Angus. “Water can go anywhere; there’s room for candles, books, rubber ducks, a glass of wine.” It’s the ultimate escape for every member of the family, whether they’re just stopping by or sleeping over.

Go-to local vintage shop: We live near Retrouvius and have been going there for years. Adam and Maria are so clever at sourcing unique pieces, and their prices are very reasonable.

Where we buy decor online: Vinterior has amazing vintage and antique finds from independent dealers.

Biggest splurge on this project: The marble bath.

Biggest save on this project: We managed to keep the old floor by sanding back and restoring all the existing floorboards. It was important for us to have a pale floor to enhance the light and airy feel on the ground floor.

We loved working with: We used a local builder and joiner to do the building works: MCJ Home Improvements. It’s run by the brilliant Ashley.

Nicest contractor we’ve ever met: Marcus from Artisans of Devizes is a longtime collaborator who helps with a lot of our marble and natural stone work.

Pristine painter: Portland Decorating has lots of unique and specialist artisans who work with the company to achieve amazing paint finishes. Their attention to detail is superb.