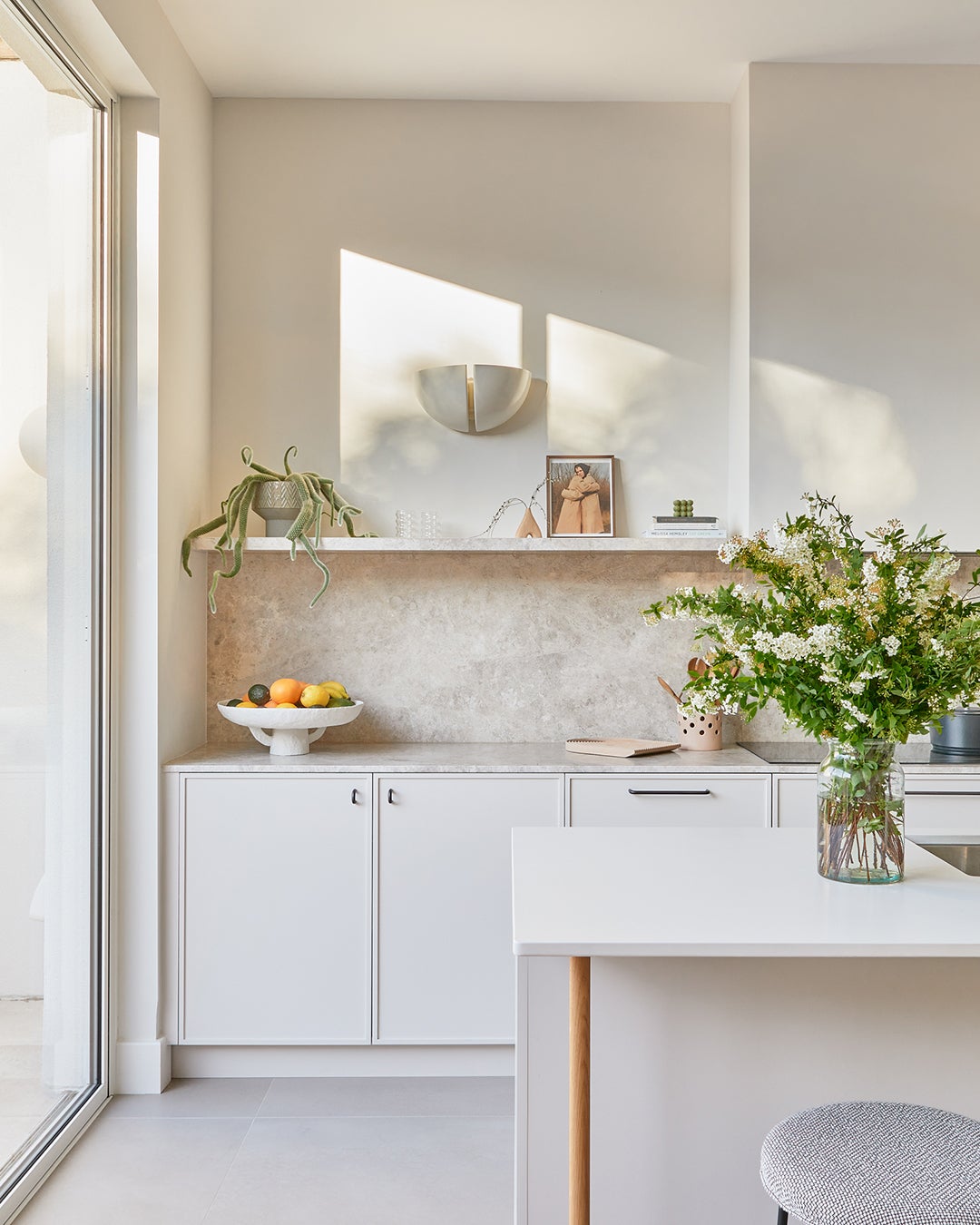 Three years ago, when designer Sheena Murphy of Nune returned to London after living in the U.S. for 12 years, she and her husband, Paul, landed on the Queen’s Park neighborhood out of convenience more than anything. Its proximity to her family was key, but it was also close to the airport—an important factor given that, at the time, Murphy was traveling back to New York City to check up on projects every eight weeks or so. (Fortunately, Murphy has a partner, Tor Sauder, holding down the day-to-day fort in the States). “It was a very practical decision,” says Murphy. The designer was equally pragmatic when it came to choosing a house to buy.

While the area is known for its Victorian- and Edwardian-period homes, there are also a few utilitarian brick buildings peppered throughout the neighborhood that were constructed in the late ’50s. One of them spoke to Murphy. “It’s what I would call an ‘ugly beauty,’” she says with a laugh. What the house lacked in charm, it made up for in large windows and open interior spaces. “There were few architectural boundaries, so that was really appealing to me,” she says. It was nothing like the brownstones Murphy had grown accustomed to remodeling back in New York, which she likens to “intellectual puzzles—I could do my own thing without any real constraints.”

A Room for Improvement

In addition to rearranging the ground level’s footprint (the designer moved the kitchen from the center of the house to the back and shifted the living area to the front), she reduced the home from a four-bedroom to a three-bedroom structure. This left the couple with a main bedroom, a guest space, and a room for their 6-year-old daughter, Matilda. As for that used-to-be fourth bedroom? It’s now a spacious en suite bathroom-slash-closet off the couple’s bedroom. “It may not be smart from a resale point of view, but it worked better for our life,” she notes.

Murphy’s return to London called for a sense of calm, particularly in the kitchen. “It can get so messy, so having a quiet backdrop when I’m cooking or doing crafts at the table helps me think clearly,” she explains. The tundra marble backsplash sets a soothing tone, as does the streamlined open shelf that seamlessly extends from the vent hood across the main wall.

The only non-minimalist thing Murphy did in her cooking zone was add decorative wood posts to the island. “It’s one thing to have a very quiet kitchen and another to have a space that feels flat and boring,” explains the designer. “Mixing materials is an important part of working with a restrained palette.”

Previously, a fussy landing offering access to a bathroom made the stairwell feel choppy. Murphy channeled flow by increasing the number of steps on the first run and topped them with the same sustainably sourced Danish oakwood that runs throughout the surrounding space. The designer relocated the powder room from underneath the staircase and filled the nook with closets that now hold rain boots and cleaning products—all the “boring things.”

The secret storage continues in the living room in the form of a stone-topped bench with low cabinets. The millwork was custom-designed by Sustainable Kitchens, the same maker that outfitted Murphy’s kitchen. “They’re great because they use all nontoxic glue,” notes the designer.

To make the living spaces feel cocoon-like, she swathed the walls in a pale taupe from Little Greene called Joanna and added an archway in between the reception area and main TV spot. “Even though these curves are more of an Art Deco gesture, you’ll find remnants from the period in mid-century homes,” she shares. “It made sense historically.”

While at the stone yard searching for marble for the kitchen, Murphy came across a decadent, expensive slab that she knew she had to use in some small way or another. The powder room posed the perfect opportunity: She already had to build a bump-out to account for the wall-mounted faucet, so cladding the whole thing in stone would make the ledge look more thoughtful. “It was an absolute splurge,” she says. “I really had to explain this to my husband.”

All the Right Angles

In Matilda’s bedroom, Murphy made the most of the sloped ceilings by situating a bunk bed in the tallest corner and squeezing in low storage cubbies where things got a bit trickier. Even though she and her husband have bumped their heads on the dramatic slope more times than they can count, the room works for Matilda right now. “It’s sort of fun because there are all these nooks and crannies that she can get into and hide,” says the designer.

If Walls Could Talk

“I tried hard to be as sustainable and responsible as possible with this house,” shares Murphy. Most of the lighting in the home is either vintage or locally sourced, which cut down on shipping materials and transportation (the one exception: the onyx and travertine sconces from L’Aviva Home, a brand based in New York). Murphy considers her best expense on the whole renovation to be the nontoxic insulation from Supa Soft, which makes its product out of recycled plastic bottles. “It improves the air quality in homes, she says.

When One Door Opens…

While turning one of the old guest bedrooms into the main bathroom and connecting it to the primary suite was well worth compromising the house’s resale value, it caused a slight privacy issue. The bedroom has a huge window that looks down onto the street, meaning anyone can essentially see into the bathroom when the blinds are open. “It needed some sort of architectural divide,” recalls Murphy. Pocket doors were a natural addition, as they can be tucked out of the way in a flash. Murphy added a second set in between the closet area and the bedroom, too, so getting dressed isn’t a risky endeavor.