How she made her go-to palette work in a playroom. 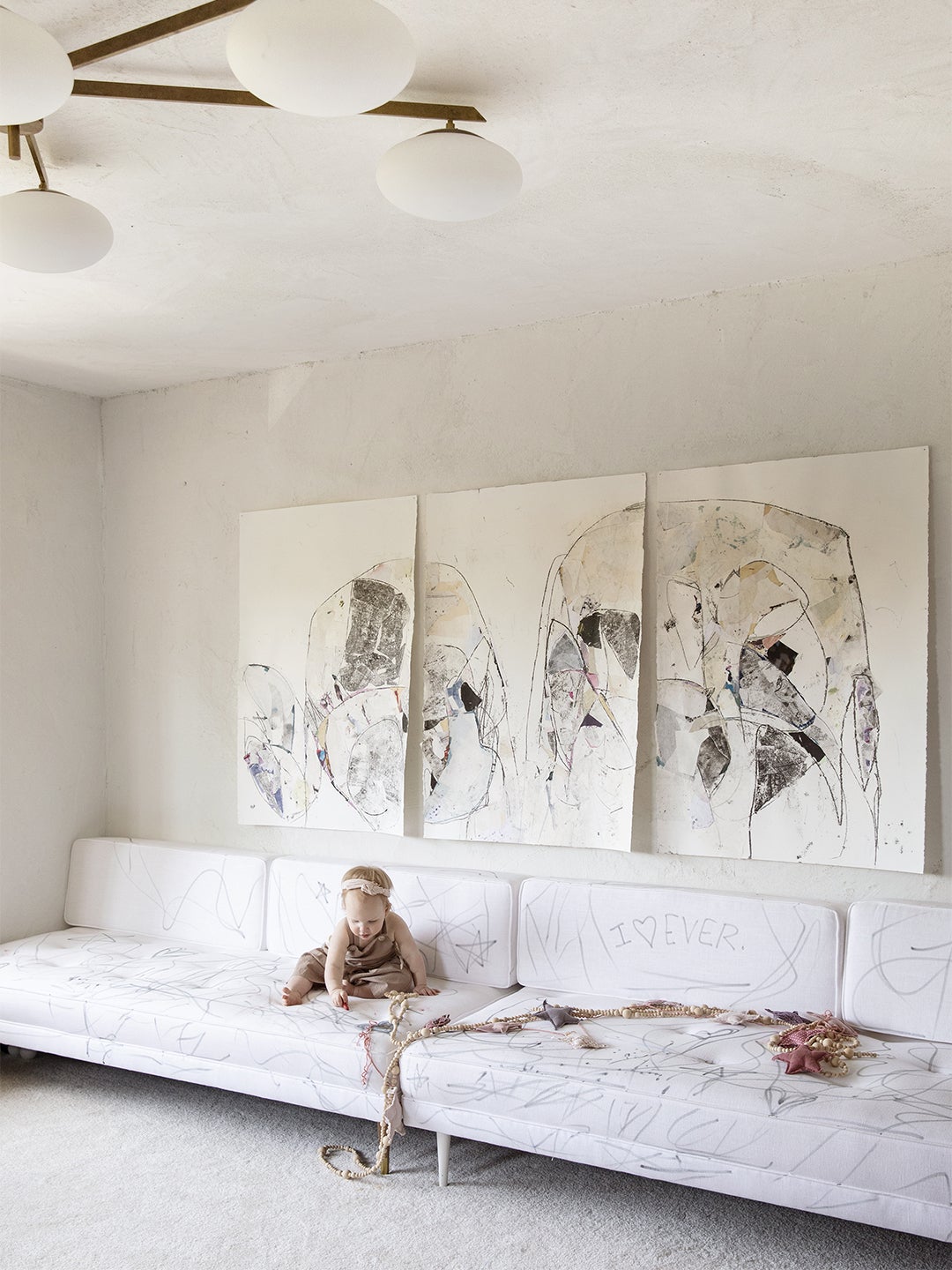 White rooms and kids don’t usually mix, but in Leanne Ford’s Los Angeles house, the two are a recipe for art. Rather than stock daughter Ever’s playroom with easels and construction paper, Ford stuck a crisp linen sofa in there, handed her toddler a crayon, and let her get to work. “I had always pictured it as this evolving thing,” says the designer. The canvas in question is a mid-century couch Ford had re-covered by Pittsburgh-based Blawnox Upholstery before Ever was born. Now swathed in love notes and abstract doodles, the formerly pristine thing is a window into her 1-year-old’s imagination. Here, the designer shares a few ideas for getting your children to channel their inner artist, plus how to make the monochromatic palette last.

Show Them How It’s Done

The graffiti started out slow. At first, Ever stuck to one corner of the couch, so Ford and her husband, Erik, stepped in and drew swooping lines across the cushions. “Once she saw more on there, she felt freer to draw,” recalls the designer. “It’s become this cool project for the whole family.”

While Ford has never attempted to clean the fabric, they mostly use washable crayons and markers on the surface in case they eventually decide to start fresh. She keeps a watchful eye on her Picasso-in-the-making during these creative sessions, but also when they’re hanging out in other living areas of the home. “Trying to tell a 1-year-old ‘you can draw on this sofa but not this sofa’ is its own can of worms, but it’s worth it,” she says.

Instead of displaying the three Jackie Leishman collages on the wall behind glass, Ford simply tacked them up with nails to keep the overall vibe of the room casual. The art has been a source of inspiration during self-isolation, both for Ever, as she sketches, and for Ford and her husband. (The works are based on a Wendell Berry poem called “The Peace of Wild Things.”) “It couldn’t be more timely,” she says. “We can kick and scream and try to keep to our plans, or we can evolve with what is happening.” As Ever gets taller and grows more adventurous, Ford plans to hang the collages higher on the wall, further out of reach, just to be safe.

Save on Cushy Carpeting

Ford’s goal for installing the wall-to-wall carpet was to get it done as cheaply and quickly as possible so Ever could get straight to playing, so she called up Empire Today (you know, the brand with all the TV commercials) and asked for its fuzziest, most teddy bear–like product. The white fabric is actually highly washable, but if anything does spill on it, Ford relies on her trusty solution: pet stain and odor remover. “I’ll use Nature’s Miracle spray on T-shirts, furniture—everything,” she says. “Between that and Mr. Clean Magic Erasers—and a fresh coat of white paint as needed—you can live in a white house, too.”