This Apartment Will Inspire You to Mix Patterns With Abandon

Designer Katie Rosenfeld transforms a bland condo into a bold haven bursting with color and personality. 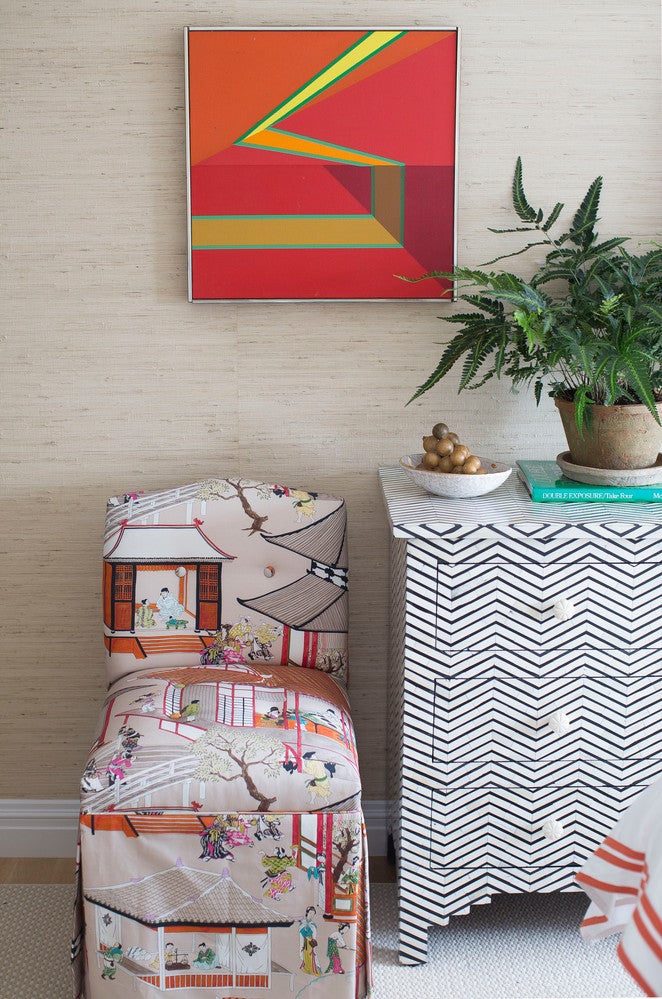 This New York City home was completely devoid of character, says Boston interior designer, Katie Rosenfeld who was called in to infuse the condominium with her vivid sense of style. “The interior was typical 1980s, very plain with no personality. There were no interesting architectural details or anything like that,” says Rosenfeld. The Upper West Side home did have one very appealing element, however: a spectacular view of Central Park.

The homeowner had loose boundaries in terms of maximalism, says Rosenfeld; she embraced daring patterns and color—hallmarks of Rosenfeld’s signature aesthetic. Together, the duo collaborated to infuse life into the home with bold textiles, dynamic hues, and art. “The key was to create warmth and not have the place feel so sterile,” says Rosenfeld.

While most furnishings have classic lines and antiques are interspersed throughout, there’s a decidedly wild side to the home. “We layered art with whimsical use of pattern and texture to create a fun and surprising environment,” says Rosenfeld.

In the living room, the two sofas were upholstered in a Chiang Mai Dragon, an iconic Schumacher fabric. “You typically see this pattern used on drapes, but on the sofas it feels really unexpected and fun,” says Rosenfeld. A large abstract painting by artist Rocio Rodriguez infuses color to the grasscloth-covered walls. ‘The grasscloth adds texture and warmth—the old white walls felt so sterile,” says Rosenfeld. A sisal rug grounds the room. “The homeowner wanted the space to feel global and traveled, one way of doing this was to layer the rugs,” says Rosenfeld, referring to the vintage Swedish hand-woven rug atop the sisal. The homeowner has an affinity for Asian antiquities: the small vintage red table nods to that while adding a pop of color.

Adjacent to the living room, the dining area has a vintage mid-century glass-topped table by McGuire. “The table is very 1960s and also very ‘now,’” says Rosenfeld. “I wanted people to wonder if the table was the homeowner’s grandma’s table, or is it new? You just never know.” Interspersed with the dynamic color throughout the home are black and white tones including the upholstered cushions on the chairs. “I tried to steer the homeowner to classic shapes and traditional forms that wouldn’t date themselves and then to treat them in more playful ways,” says Rosenfeld.

An antique coffer chest serves as bar while appealing to the homeowner’s love of Asian furnishings. A retro piece of art infuses a bit of orange into the space. “The home has a lot of browns and earthy beiges accented by pops of orange, emerald, and even pink with black and white elements throughout,” says Rosenfeld.

In the master bedroom, Rosenfeld began with a traditional approach. “I felt the room needed to be both quiet and loud,” she says. “Making something quiet and loud is hard—but possible.” Rosenfeld decided to let a Brunschwig and Fils animal print dominate the room and used it on the walls, headboard, bed skirt, and lamp shade. Shams and throw pillows in a lively Manuel Canovas print add flair. Another dash of fanciful is added with a storage bench upholstered in pink and purple tweed: “It reminds me of a vintage Chanel suit,” says Rosenfeld. The nightstand is made of faux tortoiseshell; underfoot a vintage kilim rug adds another layer of global interest.

The slipper chair and ottoman and roman shades feature the Brunswig and Fils animal print motif that dominates the master bedroom.

Rosenfeld managed to squeeze a king-size mattress into a small bedroom with an Avery Boardman daybed. “You’d never believe that the piece folds into a king, it seems so small and cozy,” says Rosenfeld. The room features pink accents including the piping on the daybed and the custom lamp shade. “It’s not overly pink but enough to give the space a bit of feminine flair,” says Rosenfeld. Through the slim Lucite table one can appreciate the cheery Missoni rug.

Day bed is from Avery Boardman; Missoni rug is from Landry & Arcari; lucite is Plexi-Craft.

The homeowner is very interested in Chinoiserie, says Rosenfeld. “But not old school-traditional Chinoiserie, She is interested in graphic, more modern interpretations of Chinese and East Asian artistic traditions.” In a hallway hangs a collection of rare, antique Japanese watercolors scored on 1stdibs. “If you look closely you’ll notice that the watercolors tell the story of how tea is made,” says Rosenfeld.

“I didn’t want the bedrooms to feel like hotel rooms,” says Rosenfeld who worked to make all three feel comfortable and collected. As in the master, in the third bedroom she used repetition to unify and provide punch: the headboard is upholstered out of the same Brunschwig and Fils fabric as the bed skirt. The multi-color quilt has belonged to the homeowner for years; it pairs well with the white Matouk bedding and a large sham covered in the same Manuel Canovas print as the roman shade.

Upholstery is Brucnschwig and Fils; sheets are Matouk; shams are Manuel Canovas.

The third bedroom features a vibrant abstract painting by artist Debra Smith. A black and white bone inlay dresser adds richness and texture to the space, while the Manuel Canovas upholstered chair provides continuity and more Asian flair. The home is unrecognizable from its original incarnation. “It’s completely opposite,” says Rosenfeld. “You’d never know from the outside that you’d find this wild, sophisticated place behind the door.”