where media, beauty, and tech industry mavens get to work. 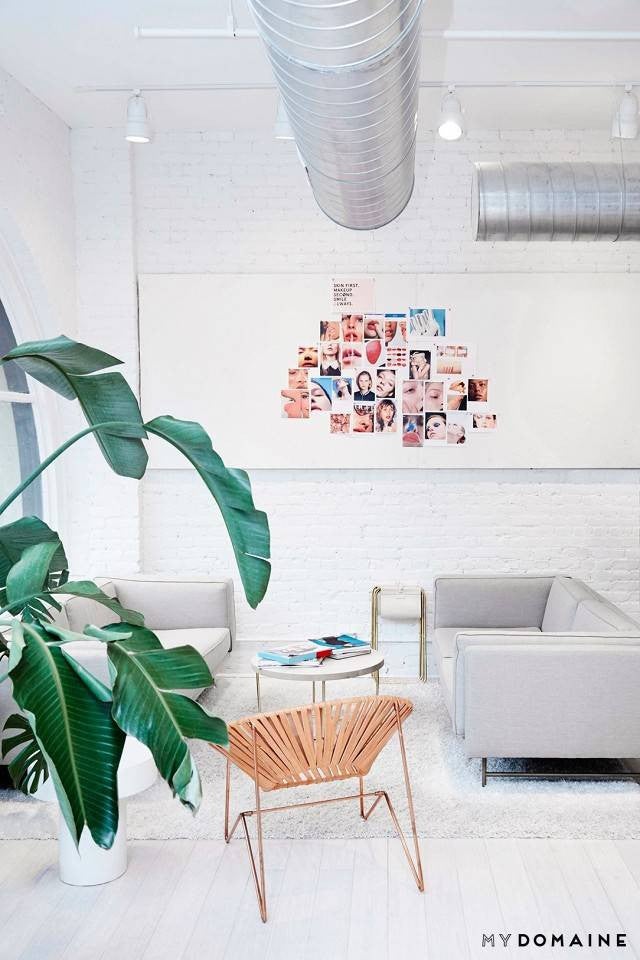 Photography by JENNA PEFFLEY VIA MYDOMAINE

The renowned editor designed new digs when the magazine moved into One World Trade from their former Times Square headquarters. A structured white armchair and crisp Roman shades keep the space polished, while metal desk chairs and a woven stool add a textured touch.

The O.G. (original #GIRLBOSS) kicks back in a midcentury wooden chair draped with chic sheepskin. We’re also obsessing over her bleached wood floors!

The editor in chief (the second African-American in the publisher’s history!) celebrates the promotion in her new office, surrounded by congratulatory blooms. Welteroth, who formerly served as the magazine’s beauty director, has a covet-worthy perfume collection, no?

At the Society Social headquarters, Owens chose a fuchsia desk with nailhead trim and a pair of white and gold armchairs to oomph up this black and white office space.

The makeup and lifestyle guru extraordinaire (who also happens to be Estée Lauder’s granddaughter!) adds a punch of color to a traditional home office with a neon green painting and geometric sculpture.

Saint John, resident #GIRLBOSS of Apple Music, kicks back in her book-filled office. FYI, she was a mastermind behind Beyonce’s 2013 Super Bowl performance and makes a cameo appearance alongside James Corden in the most recent Apple Music commercial, which premiered during the 2016 Emmy Awards.

The blogger and notorious funny girl sits at an acrylic-legged desk, while a Gray Malin print, orange desk tray, and white cubby-hole bookshelf tie her new office space together.

The Who What Wear co-founder gets down to business in this neutral but inviting space. You know Power stays busy–she and business partner Hillary Kerr are also the dream team behind Byrdie, MyDomaine, and their newest social media-based brand, Obsessee.

Brown, who was recently hired on as InStyle’s new editor in chief, perches on her desk in her former office at Harper’s BAZAAR, which was flanked with fresh orchids, Game of Thrones figurines, and tear sheets of the magazine’s famed subscriber covers.

In the Kelly Wearstler studio, a marble-top conference table is topped with black and white orb desk lamps, geometric-patterned vases, and a collection of art and design books we wish were ours.

Lyons chose a shaggy, Moroccan-inspired rug and weathered leather chair to make her space feel relaxed and lived-in. The walls are covered with inspo-shots and designs from seasons gone by.

In Getachew’s textile studio, the designer has chosen bright white walls and installed peg boards, allowing her signature, bold-colored threads to stand out, almost as its own form of art!

In Bek’s serene gray workspace, speckled Roman shades and stacked beach photographs add a touch of whimsy. And it’s not a Bek-designed space without her signature brushstroke lamps!

In the comedian’s office, which was originally revealed in the Fall 2015 issue of domino, primary colors reign supreme. The sisal area rug keeps the space grounded while pops of pattern reflect Kaling’s playful style and personality.

The jewelry designer’s new office, designed by blogger Aimee Song (Song of Style), keeps things classic in black and white. Sheepskin throws, a cowhide rug, and floral accents prevent the concrete-floored office from feeling too industrial. And you know we have a thing for sleek glass-partitioned spaces.

The founder of hip nail art brand WAH Nails designed a small but funky salon in London’s Dalston neighborhood. The walls are plastered with many of Reid’s favorite icons of fashion, music, and art.

Design darling Emily Henderson’s airy and bright space would make us want to go to work every day… even on Saturday! Gauzy persimmon panels, bright blue cushions, and lots of lush greenery take this office space to a totally new level.

In this light and bright Jana Bek-designed space, Hughes works from a round wooden pedestal table paired with a white canvas director’s chair.

In the lifestyle maven’s office, a traditional wooden desk feels apropros for the white, art-filled space. For added personality, Conrad chose a crimson desk chair and tucked a zebra-print accent chair in the corner.

Tracy Reese, acclaimed American designer and a personal favorite of Michelle Obama, gets to work in a space where fabric swatches and inspo images flank bubblegum pink-painted walls.

KAREN BLANCHARD founder & blogger, Where Did U Get That

This glass-top desk, peppered with travel trinkets, is where British fashion blogger Karen Blanchard works from home. When your shoes are that stylish, you’re allowed to prop them on your desk. Office etiquette, be gone!

The watercolor artist, whose first collection with Minted is available at West Elm, has chosen a mix of traditional and contemporary pieces to furnish her home studio space. A black Scandinavian-style wishbone chair and tiny metal table feels on-trend, while a classic navy rug adds a polished touch.

The fashion and lifestyle blogger just launched her own line of clothing and with it, revealed a posh new showroom and workspace. Of course, Parcell’s new office is decked out in shades of pink!

In the website-cum-beauty brand’s freshly designed headquarters, a pair of rich gray velvet sofas are offset by a neutral Acapulco chair and a large palm plant.