They live everywhere, from floating shelves to the ottoman. 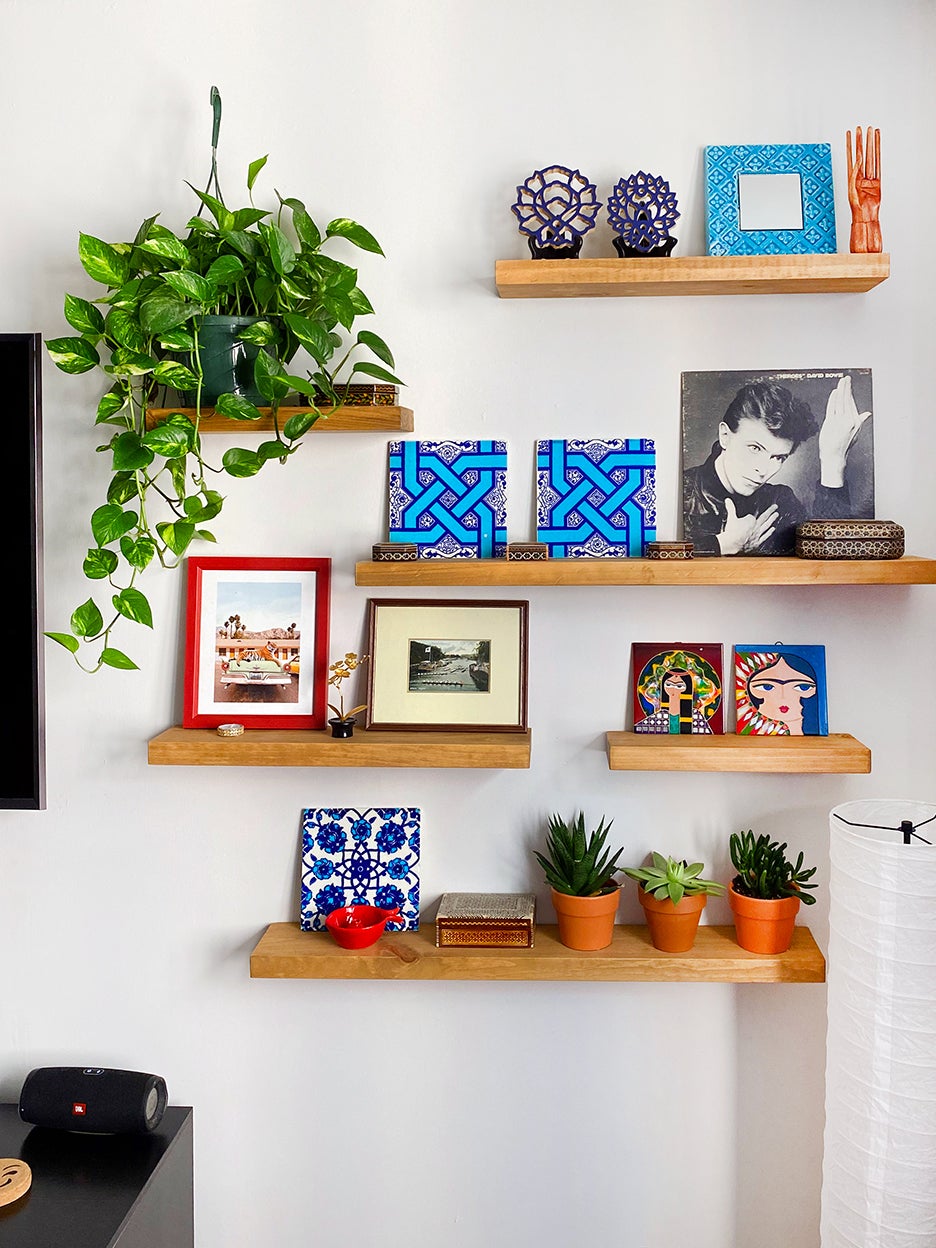 Born and raised in New York City to Persian parents, Iman Hariri-Kia felt she stuck out like a sore thumb growing up. She turned to YA literature and teen magazines to help navigate her primarily white, upper-class surroundings. But it wasn’t long after her days of scouring sources for advice on body hair and teenagedom that she discovered a different salve: writing. “I was really interested in unpacking the ways in which my Iranian American identity impacted my everyday life,” says Hariri-Kia, “especially growing up in post-9/11 New York, where I saw the sentiment toward Middle Eastern–American families change before my eyes.”

After publishing her first op-ed on Islamophobia at age 14, Hariri-Kia went on to study creative writing and music composition at Georgetown University (“Lucrative, I know,” she jokes), culminating in an honor’s thesis examining the nine stages of female puberty. After graduation, it was back to Manhattan, where, after a quick stint as an English tutor by day and underground musician by night, she ended up landing her dream job as personal assistant to the editor-in-chief at Teen Vogue.

It was one of her first pieces for the publication—using her trials and tribulations with hair removal as a mechanism to examine the American beauty standard as it relates to the immigrant assimilation experience—that solidified her love for writing about identity. These days she’s Bustle’s sex and relationships editor, curating the site’s expansive vertical with accounts of  everything from love and singlehood to friendship and sexual independence and health. But she’s never forgotten that young girl desperately trying to find her place. “Whenever I write and assign stories, I think about being the one person in a room who can’t relate,” says Hariri-Kia. “I want to make that person feel seen and understood. I think a lot of that is a love letter to the girl who I was and the woman I’m becoming.”

At home in her Manhattan apartment, a collection of Persian tiles reminds Hariri-Kia on a daily basis of the long line of artists and makers from which she came and the country that she, and so many she loves, call home. Here, she tells her story.

I’ve picked up handmade, hand-painted Persian tiles everywhere from Tehran and Kashan to Yazd and Isfahan. Whenever I travel to Iran, I try to find a little piece of each town and village I visit and bring it home with me.

They live all throughout my apartment—on floating shelves in my living room, on my ottoman, on my walls. I try to display them wherever I can.

My mother has always been very passionate about supporting Iranian and Middle Eastern artists, especially women. So we had a lot of Persian calligraphy on the walls: beautiful paintings of Iranian women, works from Iranian photographers. You don’t really realize how much that impacts you until you’re older and in a position to make decisions yourself.

Growing up, I passed a painting every day in which the woman portrayed had a unibrow, and as a child, I had a unibrow, too. At the time I didn’t realize how important that is, for a young girl to see herself reflected as beautiful in art. These days I look at two gorgeous tiles that depict women with unibrows and I know that’s what true beauty looks like.

First of all, displaying the tiles allows me to feel part of a larger global network of Persian artisans, artists, and poets who are floating through the diaspora creating art and trying to feel connected to a home that in many ways doesn’t exist for them anymore.

They also bring memories from my travels to Iran into my apartment. They’re not just tiles—they’re seeing my grandmother for the first time in years, they’re being able to feel the soil of a country that I never got the opportunity to grow up in, they’re my mother’s face as she shows me around the very bazaars she frequented in her youth. They’re so much more than just objects, and that to me is the greatest gift.

Both of my parents grew up in Iran, then left for college—my father went to Canada and my mother came to the United States. A few years into school, a revolution happened in Iran. During that time, my mother was almost deported, but thanks to an amazing professor’s support, she was able to stay in the States to work and create. She’s lived here ever since. My mother’s family left Iran during the revolution and went to London and later New York when I was born. I grew up having them just blocks away, which was the most amazing privilege. I still see them for Sunday night dinner every week. I’m just amazed by the strength and resilience of my family. Imagine having to pack your entire life in a suitcase, overnight, and get on the last plane out of the country before the airports are shut down. Everything they went through impacted my childhood and still impacts the way that I think about family and the ties that bind us together.

When my family members come over and see the tiles in my apartment, it means the world to them that I’ve incorporated so much of my Persian and Middle Eastern background into my home. And it’s not just the tiles—I also have artwork from Persian and Middle Eastern artists up on my walls and a series of paintings commissioned by my sister, which were inspired by Iranian tapestries that just blow me away. I have a rug that my father collected from his time in Tehran (where much of his family still resides). Every thread of Middle Eastern and Persian influence in my apartment comes together to create a really beautiful tapestry of what it’s like to grow up as a first-generation American. By having these artifacts around my home and maintaining a connection to my roots, every time I show family my place, it proves to them that I haven’t turned my back on my Persian culture. I’m making it a part of my present, not just my past.

When I look at the tiles, and look at all the artifacts that I’ve collected from Iran, I’m reminded that there are so many people who don’t have the same attachment to where they’ve come from and are actually looking to create that sort of attachment through things. But ultimately, it doesn’t need to be externalized; it doesn’t need to be tiles or art. You don’t need to be privileged, you don’t need to spend a lot of money to carry a sense of your heritage with you. As long as you hold that sense of self close, that sense of who you have been and who you are becoming, you can validate yourself.

I feel so lucky that I’m able to look at these reminders every day. Persians have always been poets and storytellers, and every time I sit down to write my first sentence and look up at my tiles, I’m carrying on that tradition.