How a Couple (With a Dog!) Make it Work in a Studio Apartment

Secrets to happily cohabitating in a 512 square-foot space. 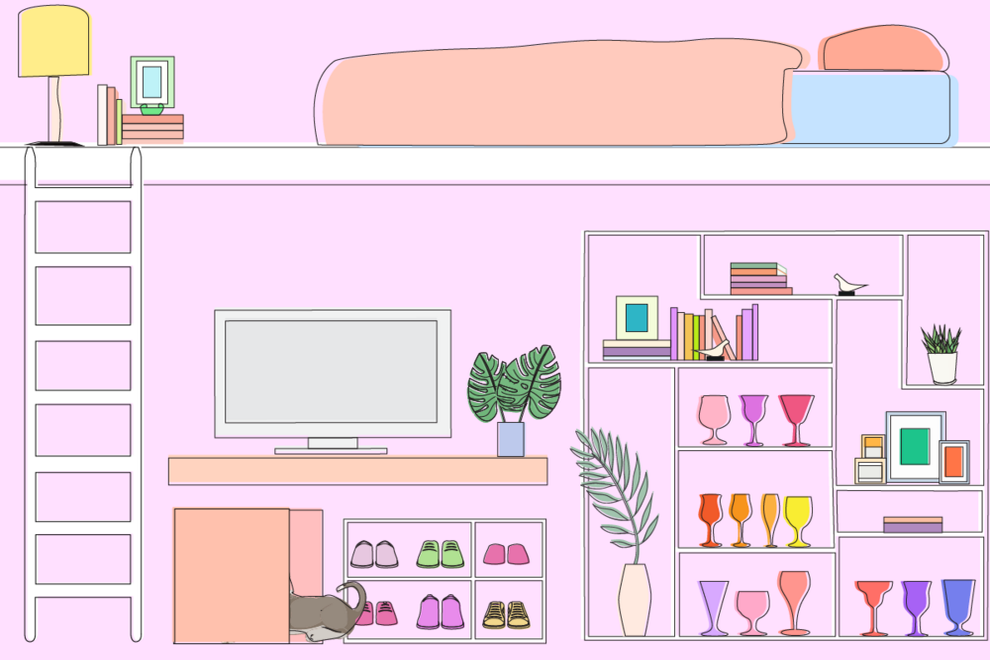 While my friends back home in the Midwest are busy upgrading their starter homes to four-plus bedroom mini-mansions with finished basements and three-car garages, I’m in New York City living in a 512-square-foot studio with my husband and 24-pound dog.

These aforementioned friends are always aghast when I tell them that I not only don’t mind small-space living, I actually prefer it. Don’t get me wrong, I still aspire to have an interior door that goes to a room besides the bathroom, but on the whole, our little apartment in Manhattan’s trendy NoHo neighborhood feels just right for us.

Of course, living on top of each other hasn’t always been easy. Throughout the 12 years we’ve cohabitated, we’ve learned countless lessons in patience, compassion, and forgiveness, and we’ve acquired an ever-growing list of

to make life in one room feel downright spacious.

Here, nine of my most important tips for anyone contemplating life in a shoebox.

Speaking of shoeboxes, we don’t actually own a single one. Everything that enters the apartment gets immediately unwrapped or unboxed before we put it away. This was a tip I learned from my day job as a beauty editor: You can fit a lot more lotions, creams and makeup into the beauty closet when you take everything out of its space-guzzling container. Instead, shoes get put directly into over-the-door racks or under-the-bed canvas dividers.

And what happens when those racks and dividers are full? Something has to go before anything else can come in. We think of the clothing, cosmetics, and household items we buy like a packed college bar: nothing can enter until something else exits. This is great for purging expired products, clothing we no longer wear, and kitchen utensils that have seen better days. It also ensures we always know what we have and where it lives.

Every Piece of Furniture

Should Serve Multiple PurposesThis goes without saying, but multifunctional pieces are an absolute necessity. We have a gorgeous Mid-Century Modern-looking dog crate that doubles as an end table. (Seriously, most people don’t even know it’s not just part of the décor.) The couch is also a sofa bed, which is essential for when visitors come to stay, and they do—often! We have four ottomans that open up for storage and can be moved around for extra seating or used as a coffee table. We have, believe it or not, hosted 12-person Thanksgiving dinners in the past.

When we first moved in together, we bought those open, ladder-like bookshelves that were all the rage at the time. Big mistake. The last thing you want to see in a small space is clutter. Now, we have Ikea Besta storage units that hang on the wall, match our TV stand, and most importantly, have doors that let us shut out the mess.

Display a Collection as Artwork

As you’ve probably guessed by now, minimalism is not my strong suit. I’m constantly carting home new fragrances and candles from work and am stuck trying to find a home for them. For a while, they lived in our refrigerator alongside bottles of wine and Champagne. That worked until we jumped on the Blue Apron bandwagon and started cooking at home more often than ordering takeout. Besides, it was a shame that the pretty perfume bottles weren’t on display. I ended up buying a metal Alcove Wall Shelf from CB2 that has multiple ledges at varying heights in which I put all of my fragrances. It not only keeps them away from the bathroom and out of direct sunlight (good things for your scents), but it also adds visual interest to a wall that had otherwise been left bare. Not a fragrance junkie? The concept works with any kind of small collection.

Carve Out Separate Spaces—and Stick to Them

When you don’t have a room of your own, it can feel like you don’t have privacy or control. To combat this, I swear by having separate closets and separate shelves in the shower. I don’t care what my husband does with his space, and he doesn’t care what I do with mine. We also don’t put our things in or on the other person’s space. I can’t recommend this enough—no matter what size house you live in.

Moving away from the tangible, these next few tips are all about compromise. In a studio, you’re most likely going to have only one TV and maybe an iPad if you’re lucky. I know some couples like to set up TV-watching schedules, but I think it’s easier to find a few shows you both like enough to watch together. If one of you has a deep aversion to say The Bachelor and the other could take it or leave it, just avoid the issue and don’t turn it on. If it’s something one person loves and the other hates, like baseball in our house, consider a subscription to an Internet-service that will let you stream it on another device.

Talk on the Phone Elsewhere

Listening to other people talk on the phone when you have nowhere else to go is straight up obnoxious. Find time to make your calls when your partner isn’t around. For example, my husband talks to his parents on his way home from work, and I call my mom in the morning after he leaves.

Cut Each Other Some Slack

It’s easy to get irritated with someone when you live in such close proximity. Everything that annoys you about someone else in general, from leaving the dishes in the sink to staying in the apartment all weekend, feels amplified when you’re confined to a single room. This is when a little patience and a lot of Frozen-style “Let It Go”-ness is essential. My husband and I try to split tasks around the house evenly, but sometimes one of us will be more in the mood to be productive than the other, and that’s OK. We don’t make each other feel bad about it. We thank the person putting in the work and make sure to do our part next time.