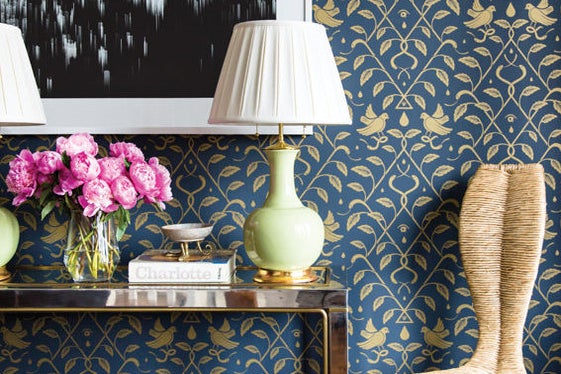 In the entryway, Vandiver opted for simple furnishings covered in playful textiles.

In January 2014—after a year and a half of living in soulless rentals while filming her hit television series, Nashville—actress Hayden Panettiere finally found a house in Tennessee where she could put down roots. For help in designing her Nashville residence—the first home she’s shared with her fiancé, world-champ boxer Wladimir Klitschko—Panettiere called upon Benjamin Vandiver, a decorator who’s helped with the homes of mutual friends Connie Britton and Jessie Baylin. The actress at first desired an informal home for a young couple, but a few weeks into the design process, she discovered she was pregnant. (Her adorable daughter, Kaya, is now six months old.) So, midway through his task, Vandiver was faced with the fresh challenge of transforming his client’s 5,000-square-foot space into a residence fit for a growing family. “Suddenly, we had to find a way to speak to Hayden and Wladimir’s personal styles in a way that felt collected and authentic,” he says, “while also creating a child-friendly home.”

These atmospheric stacks of timber were inspired by a scene Vandiver glimpsed in architect Bobby McAlpine’s kitchen.

Vandiver, a Kentucky native, has made his home in Nashville.

Aside from the 14-inch height difference Panettiere is a petite five feet two and Klitschko a towering six feet seven the pair also has remarkably dissimilar tastes. Klitschko prefers pieces possessing a modern, European-inspired edge while Panettiere is a traditional girl with a feminine flair. Reconciling their aesthetics proved an exciting challenge for Vandiver. For instance, to balance out the pale-pink master bedroom, which features rose quartz table lamps and loads of blush-colored pillows, the designer integrated neutral tones into the headboard, bedding, and wallpaper. In case that wasn’t enough to satisfy Klitschko’s masculine tastes, Panettiere presented him with his own music room located above the garage, where he can play drums as loudly as he wants complete with a vintage-style sofa boasting arms that open into insulated beer coolers.

Personal notes from musicians such as Justin Timberlake and Fergie are arranged throughout Klitschko’s music room.