Everything You Need to Know About Marimo Moss Balls

Praise be: They require almost no upkeep. 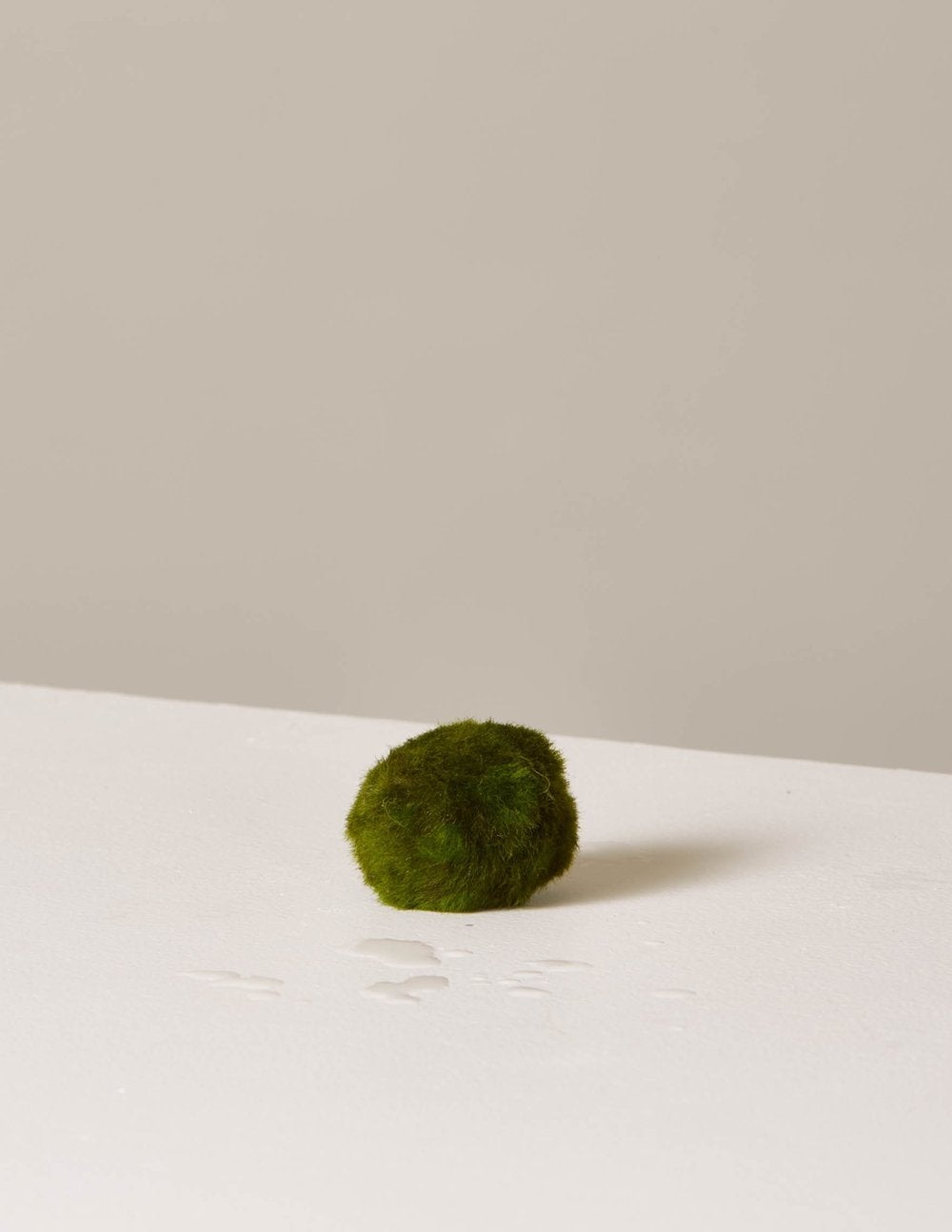 Marimo moss balls (aka Aegagropila linnaei)—those cute little spheres of greenery —are not actually made of moss at all. They’re a freshwater, filamentous, green algal colony. First discovered in Lake Zell, Austria, in the 1820s, the plant was later nicknamed “marimo” by Japanese botanist Takiya Kawakami. (“Mari” means ball, while “mo” is a generic term for aquatic plants.)

While marimo were discovered in the 19th century, they’re actually much, much older: They evolved a billion years ago in the Neoproterozoic Era. To put that into perspective, there were no fish, animals, or plants during this time: It was just oceans of single-celled life.

Today, marimo are super popular in Asia, and we predict that they’ll be one of the trendiest house plants over the next few years, as they are super low maintenance and very photogenic.

Marimo is native to previously glaciated areas of the world, including Japan, Russia, Iceland, and parts of North America. Their spherical shape is created by the tidal force of the lakes. In the wild, marimo call cold, calciferous lakes home. But there’s a way they can thrive in your home space, too.

How to Care for Marimo

What type of water?

Clean, cool water. For your marimo’s optimal health, use only filtered water, and make sure it’s room temperature or cooler.

What type of light?

Moderate to low indirect light. This is because marimo receive very little light in their native environment at the bottom of lakes. Direct sunlight can overheat your marimo, but artificial light is okay.

Change your marimo’s water about once every two weeks. When you do so, gently squeeze your marimo to remove any of the old water. Then, roll them back and forth on your palm to retain the circular shape. And don’t worry: They’re not as slimy as you think. They’re actually quite fluffy (almost velvety) in texture.

Marimos grow very slowly—one- to two-tenths of an inch per year. The world’s largest recorded marimo is almost 40 inches in diameter, making it an estimated 200 years old.

Why is my marimo changing color?

Yellow or brown marimo is a sign that something is wrong. It could be receiving too much sunlight or have an infection, or their water quality could have gone down. We recommend washing your marimo under running (tepid) water, then replacing the water in their container with cool, filtered water.

You should also add in some aquarium salt. Note that you should never use table salt on your marimo—you can find aquarium salt at your local pet store. Be sure to place your marimo away from direct light.

How long can marimo live outside of water?

If conditions are ideal, they can live out of water for about a month. However, we recommend a week at the most.

Why is my marimo floating?

The majority of the time, marimo will sit at the bottom of their container—just like they would in their native lake environment. However, a marimo does perform photosynthesis, which makes oxygen, and the oxygen bubbles may cause your marimo float up to the surface of the water for a period of time. The more sunlight it receives, the more oxygen it will produce.

Is there any way to get my marimo to grow faster?

Marimo are slow growers—be patient. However, lower water temperatures, better water quality, and an extremely diluted amount of fertilizer can help. More light also equals more growth, but be very careful not to overcook your marimo in direct light.

Can my marimo survive in a sealed container?

They can, but we recommend picking one with a loose lid, which will allow your marimo to breathe with its environment.

Marimo are sometimes referred to as love plants. According to Japanese legend, two lovers longed to be together—one was the daughter of a tribe chief, while the other was a poor commoner. When the chief forbade the lovers from being together, the couple ran away, fell into a nearby lake, and became marimo balls. Then, they were able to live together forever.

Marimo are meant to bring luck, love, and happiness to their owner. It is also believed they have the ability to heal a broken heart, so you might want to consider investing in some if you’re suffering from a bad breakup.

Find your very own marimo on The Sill.

This story was originally published in August 2017 and has since been updated with new information.