Time for a postcarding party. 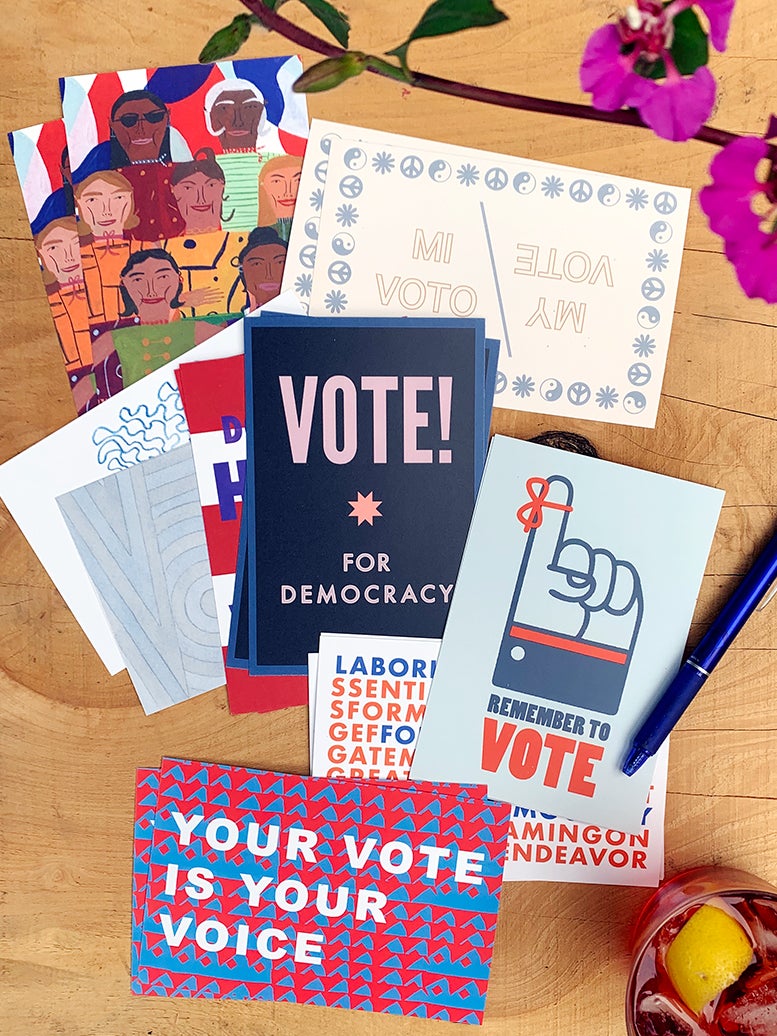 In early March, wardrobe stylist Joanne Duong Bartels and a couple of her friends were visiting Arizona on the first of many trips they had planned to take across the country over the spring and summer to help register voters. But their newly formed grassroots organization, GOTVmoms, a group of six mothers who are based in San Francisco, quickly realized it was going to have to completely change its strategy and move its efforts online.

“People would always ask me the same thing: ‘How do I get involved?” says Bartels. “I thought, Okay, what if we could have a hub for all this information we’ve learned in our own activism and streamline it in a way that makes it easier to digest?” The result is the GOTVmoms website, a helpful get-out-the-vote resource, where members also share their own tips.

It may seem like a small gesture, but according to the U.S. Census Bureau, just over 60 percent of the citizen voting age population voted in 2016. In the current climate, phone banking and postcard or letter writing are the best ways to increase that percentage. As Vote Forward reports, a controlled trial in the special election for the U.S. Senate in Alabama in 2017 showed that voter turnout among those who had received handwritten letters was almost 4 percent greater than those who hadn’t.

Through GOTVmoms you can find an organization, like Postcards to Voters and Fair Fight, through which you can sign up for a set number of addresses or phone numbers and receive a general script. From there, you can organize your own socially distant get-out-the-vote party. “It’s easy to say, ‘I’ll bring the addresses, the postcards, and stamps—you just bring your own drink and chair, and we’ll do it in my backyard,” says Bartels. Here, she shares more of her tips for getting involved at home.

Make It an Event

If you have an outdoor space where you can hang out while social distancing, that’s great. Turning postcard writing or phone banking into more of a social activity is an easy way to encourage friends to embrace their activist side. Ask each person to bring all their own essentials for safety—a clipboard, a drink (wine is totally fair game), and a pen (erasable is preferred if you go for the wine). “With anything in life, come prepared and be ready to do the work—while having fun,” says Bartels. You can also host over Zoom—just make sure everyone has postcards and stamps; the addresses can be circulated in a Google Doc for the whole group to reference.

Custom postcards are a great way to add personality to messages, making them stand out in a sea of junk mail. GOTVmoms offers its own set with designs by local Bay Area artists, but you can also support artists in your community. For stamps, look no further than the USPS, which has several cool special-edition designs—and take note that postcard stamps are slightly cheaper than letter stamps, if you want to save a little.

Get the Kids Involved

“Kids are great at getting potential voters to open up,” says Bartels. In person, just a smile or a greeting can go a long way. If you’re working on postcards, let them enhance the visual details—such as adding decorations or applying stamps—to bring their perspective onto the page.

GOTVmoms isn’t just for moms—it’s a welcoming space for anyone who wants to take part in the get-out-the-vote effort. “If you get one person to register or to vote, then they can get more people—the more people you engage, the more the effort spreads,” shares Bartels. “Even if they’re already registered, they can talk to their aunties and cousins and coworkers about getting involved.” This is just the beginning.