From the plaster-like walls to the marble sink. 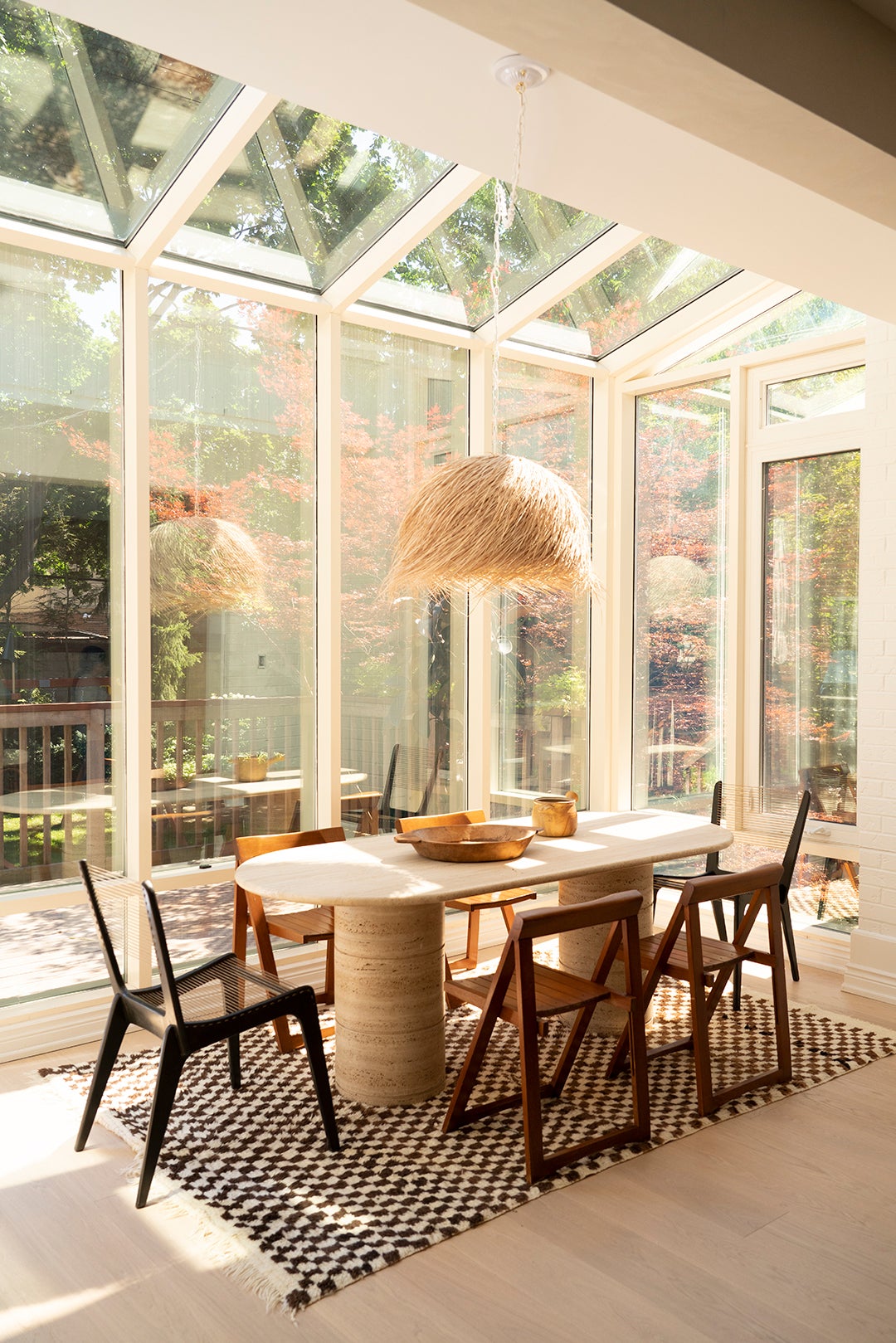 Eden Grinshpan’s workplace isn’t a desk, it’s her kitchen. While most people are glued to their in-box from 9 to 5, the chef, cookbook author, and Top Chef Canada host spends her days roasting whole cauliflower heads, baking pull-apart babkas, and drizzling tahini—a food group in itself if you ask her—over everything. “I’m half Israeli,” she notes. “I cook mostly Middle Eastern food, and I’ve always gravitated toward that warm, Mediterranean aesthetic.”

So it was the breakfast solarium—“I love the glow it casts,” says Grinshpan—that sold her on the house she now shares with her husband, Ido Nivron, and their two daughters, Ayv (4) and Romi (4 months), when they were relocating to her native Toronto from Brooklyn during the pandemic. “You almost feel like you’re on vacation somewhere,” she says, especially when the backyard is covered in snow.

Despite Grinshpan’s love of vintage fixtures, some relics of decades past in the circa-1980s nook and adjacent kitchen—floral tiles and a triangular-shaped island to name a few—had to go. “In New York we never had enough space. I was storing so many things in my oven,” recalls the chef. Grinshpan naturally held strong opinions about her dream kitchen (wanting more room being one of them), and it became local interior designer Montana Burnett’s job to bring them to life.

Room for Everything and the Kitchen Sink

The kitchen when the family moved in. Photography by Edith Grinshpan

The layout was crucial to get right for Grinshpan, who knows the value of a good mise en place. She sat down with Nivron; Burnett; and their woodworker, Ross Etherington, to nail down a floor-to-ceiling pantry wall and additional storage flanking the living room archway, which allowed them to keep the stove wall almost bare. Only a minimal shelf runs above it, where Grinshpan keeps fresh lemons, everyday dishes, and pottery brought back from Jaffa, Israel.

But it’s behind the doors, which boast custom dividers for cutlery, spices, and cookware, that the magic happens. “You should see inside of the drawers,” she says.

Riffing off the warm, sun-burned vibe of the solarium, Grinshpan and Nivron went on the hunt for the perfect marble slab for the countertops, backsplash, and even the sink. “We toured all the stone yards in the city but kept going back to the first one we saw,” she remembers. “It has so much movement, and I love the coral-peach tones.” Burnett gave the stone a modern, honed (aka matte) finish and rounded bullnose edges, and the porous surface will continue to change over time. “I love when things look a little worn and have wine stains,” the chef points out.

The counters weren’t the only place where Grinshpan embraced inevitable wear and tear. When her Waterworks unlacquered brass plumbing fixtures arrived, they were a little too shiny for her taste. “I went to town on the pot filler and the faucet, rubbing them with vinegar and salt water to speed up the aging process,” she says, laughing. “Ido would ask me if I was coming to bed and I’d say: I can’t, I’m aging my brass!” The elbow grease paid off: They now have a tarnish that plays off the burnished bronze cabinet hardware.

Textures That Transport You to the Coast

Everything came together thanks to a mix of textures and tones that underline the space’s Mediterranean influence: rattan and oak pantry doors; bone-hued cupboards to match the cool cream limewash walls in the dining room; and tone-on-tone micro-cement in lieu of paint. “The material can actually hold up to heat better than Venetian plaster with a similar effect,” explains Grinshpan.

Like most pandemic renovations, this one was delayed, which made getting the final piece delivered all the sweeter: “I was super-pregnant and speechless when 15 grown men were schlepping in this 9-foot marble island,” recalls Grinshpan. She served up homemade pasta for the first time in months that very night. “Ido and I sometimes sit here with a cheese platter and a glass of wine and feel like we’re on a sexy date,” she adds. “For me the kitchen is where I blast music and really create.”