Your sewing skills don’t have to be all that. 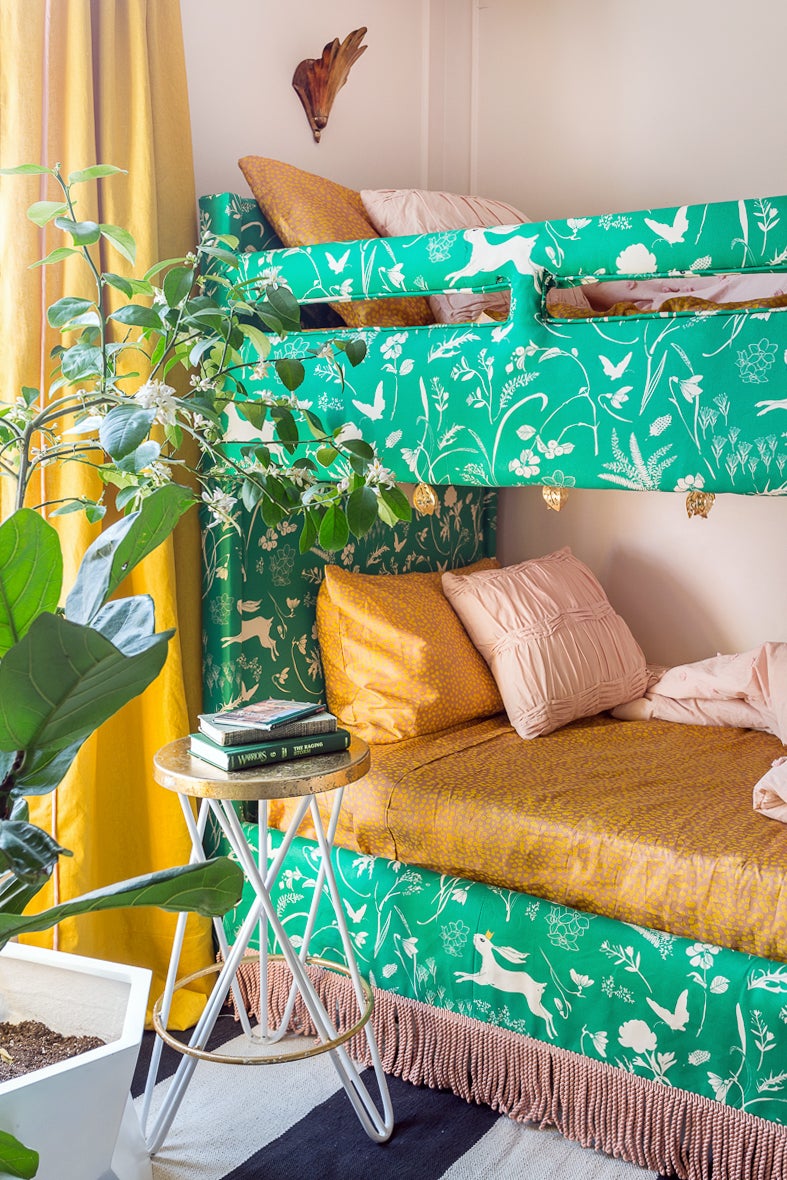 When designer Jewel Marlowe and her family of five moved from their Rhode Island rental to a new home in Virginia back in 2019, her two youngest daughters (then 10 and 7) made a confession. “They admitted to me that they never really liked their last space,” shares Marlowe. “They never felt like it was their room.” The designer saw their move South as an opportunity to get things right, especially since the girls were still sharing a bedroom at that point. She let them weigh in on the design, starting with a bunk bed revamp.

The inspiration behind the space was a preppy play on a French apartment, with hints of Art Deco and 1950s glamour peppered throughout, so Marlowe decided to upholster her kids’ simple white wood bunk to take the drama up a notch. “I gave them an edited selection of fabrics to choose from,” recalls Marlowe. She narrowed it down to two dozen textile options from Spoonflower and let them pick. “It was like they were my clients or something,” she adds with a laugh. The winning choice? The Enchanted Bunny Prince by designer Esther Fallon Lau (the other leading contender was a pattern featuring narwhals). The company customized it by enlarging the scale of the illustration and printed out the 11 yards she needed to get started. Marlowe shares the details of her DIY with us, below.

Filling the openings at the head and foot of the bunk will give you more surface area to upholster. While you can do this with plywood, Marlowe went with an even easier option: leftover cardboard boxes. She cut up the material into three rectangles with an X-Acto knife to fit the dimensions of the gap and stapled them in place on each end.

To create a plush look, wrap one layer of batting around the head and footboard as well as the upper bunk’s rail. Note: Marlowe started the process by covering all three boards in one fell swoop but halfway through the project ended up cutting small slits between the top two boards to make it look less bulky. “A more tailored finish made it appear in scale with the rest of the room,” she says.

Step 3: Be Seamless With Your Seams

Because Marlowe was using a patterned fabric that couldn’t run horizontally (she wanted the bunnies to sit upright), she had to make two seams on each upholstered section. If you’re in a similar predicament, line up your fabric scraps just how you want them, and then place stick-on adhesive tape in between the seam and iron it to fuse the two pieces. Solidify the connection with thread by running it through a sewing machine.

Once the fabric bits are sewn together, drape it over the railings and staple the panel at the bottom, top, and each of the sides, straightening the material as you work (if things end up looking crooked, Marlowe suggests simply whipping out a staple remover and adjusting as needed). Fold the fabric under the bottom side of the top bunk and secure it.

Psst: This would have been the stage where Marlowe would’ve cut the slips between the rail boards, “making sure to cut directly into the corners and not at an angle,” she says of achieving the most pristine result. Once the top beam is upholstered, you can start to take on the rest of the bed using the same technique.

If you opt to add a coordinating bed skirt, you will need to follow the same directions, above (Marlowe opted for sewing on a fringe detail along the bottom). This time around, wrap two layers of batting to the base section and then line the skirt piece up so it’s just skimming the floor and staple along the back side.

Step 6: Give It a Professional Touch

For a truly finished look, hide the staples with double-welt piping (this is when you take one piece of trim and make it look like two rows of piping close together). The designer made a special welt for the gaps around the top rail boards by leaving about an inch of empty space in between the two cords. “There are lots of YouTube tutorials on how to do it,” Marlowe points out. “If I were to go back again, I’d probably hand-stitch all the way around; instead I just reinforced loose parts with glue.”

The bunk has held up well over the past three years. The only part that needs some restapling is the piping near the ladder (not pictured). The one disadvantage is that if Marlowe and her family decide to move again, the DIY will be a goner (they have to take the bunk bed apart to get it out the door). “But we thought we’d take the risk,” she says. And this time around, everyone was happy about it.