For This Designer, Decorating Dollhouses Is a Form of Escapism

They’re no longer just for kids. 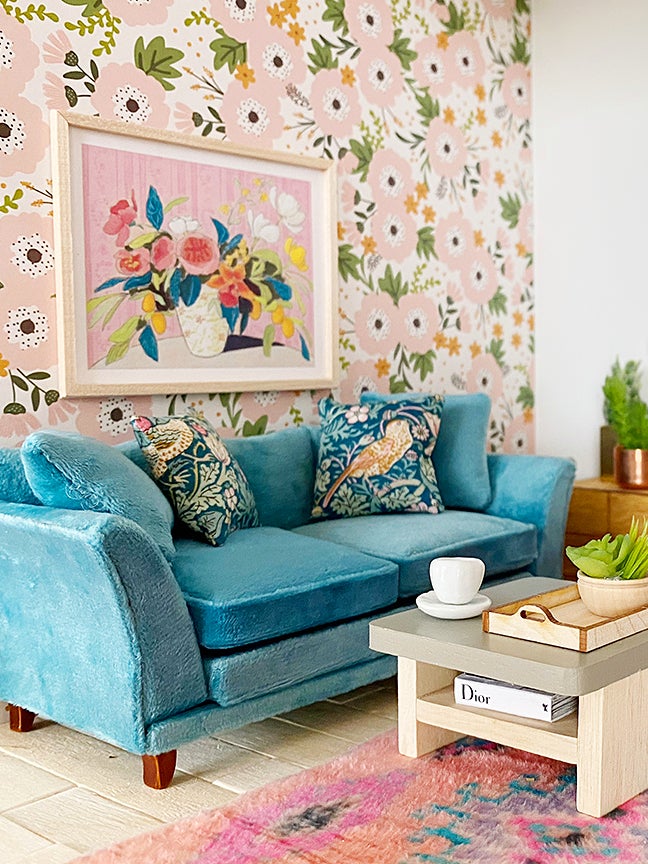 Not a day goes by that Amy Pigliacampo doesn’t dream of moving back to Topanga Canyon. The lush, Malibu-adjacent landscape felt like a secret to the designer and her husband when they moved to California from the East Coast nearly a decade ago. “It’s hard to explain the way it makes me feel. It’s such a magical place,” says Pigliacampo. Over the years, the couple bounced between neighborhoods in Los Angeles—from Silver Lake to Mar Vista—before eventually settling in Boulder, Colorado, with their two small children. Missing the surf and sun lately more than ever, she’s channeling the places she once knew and loved—through dollhouses.

With many of her large-scale projects on hold during the pandemic, the designer has been converting play homes from Target’s Hearth & Hand with Magnolia line into miniature retreats, one of which is directly inspired by the small guesthouse in Topanga that she and her husband rented 10 years ago. “There’s a lot of Scandinavian influence, but it’s also very warm with mid-century elements—a mixture I feel you only see in Southern California,” she says. The pint-size place is outfitted with a sofa upholstered in fabric Pigliacampo cut from a vintage Ralph Lauren serape skirt. The faux plants are crafted from tiny cuttings leftover from styling projects, and the blond floorboards are really just stained Popsicle sticks. Who said dollhouses are just for child’s play?

In addition to being a source of escapism during these past few months, each of Pigliacampo’s four dollhouses has been an outlet for pushing design boundaries, specifically when it comes to patterns. The home she’s calling the London Townhouse is an ode to her inner maximalist: The walls are clad in punchy wallpaper prints (really just scrapbook paper) and the two-inch throw pillows don classic florals inspired by Liberty London fabrics.

“Our real-life home is very minimalist,” says the designer. “I wanted to know, what happens when you go full-on with color?” A bedroom swathed in a bold wall covering or a couch covered in vintage fabric might cost thousands in real life, but here she can execute the same thing on a much smaller scale for $5. “It’s cool to realize these visions of what I would love to do but may not have the budget for,” she says.

The Popsicle stick flooring is a place to test out different wood tone samples, from walnut to weathered white. Pigliacampo approaches the process as she would in a real home, laying the boards down to check that they fit before numbering them and taking them back out for staining. She designed the planks in one of the homes to look like the beat-up ones in her former Brooklyn apartment. “It was an old luggage factory, and the 100-year-old floors had all these cracks and staples in them,” she recalls. “I try to give each house a specific personality.”

Any furniture or accessories she can’t make herself, she sources from small, female-owned businesses in Europe or Australia—places where she says miniature home–making has become a major trend. Some of her favorite makers include Macy Mae, The Tiny Timber Co., Mini Adventures, Jessica Cloe Miniatures, Small Fun Shop, Boho Vibes Studio, Kat Webster, Pretty Little Minis, and Kitty Loves Lou. Pigliacampo recently ordered a color printer so she can start making her own rugs.

Household objects have proven to be especially handy for furniture-making. Pigliacampo recently turned a terrazzo coaster into a dining table (her husband sawed off part of a closet hanging rod to make the base; she scraped off the cork backing with a razor blade and acetone). After much exploring on YouTube, she has taught herself how to make bed mattresses from cut-up Magic Erasers and beds out of wood dowels. “In general, it’s all tedious. If you don’t want things to look crooked, you have to take the time,” she says. “But it seems to be bringing a lot of joy to others, which feels nice during this very unsettling time.”