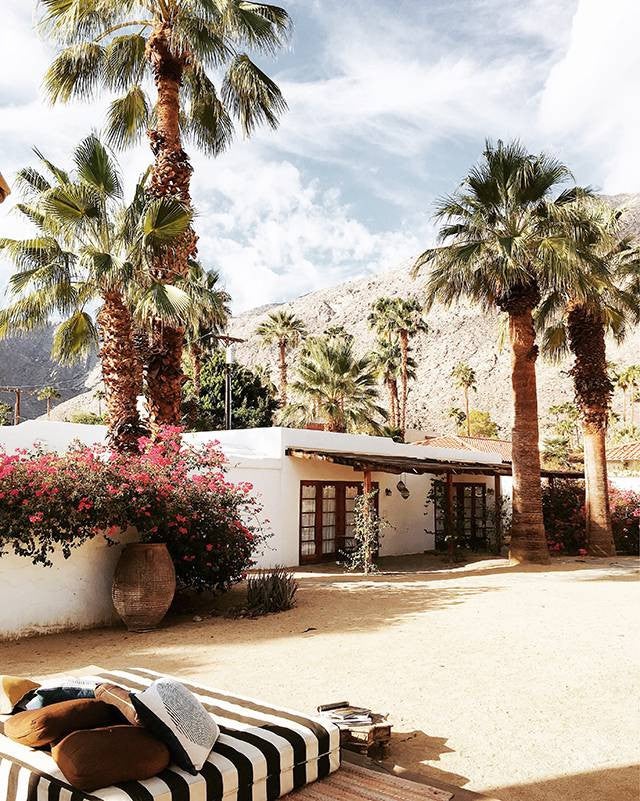 If you intend to come back from your next vacation with some serious photographic wonder, the desert might be where you’re headed. Toss that extra phone battery in your backpack and hit the road!

If you crave a desert vacay with style, look no further than the Sonoran Desert in the Southwestern US.  While there is plenty of authentic desert landscape to view and explore, this desert is also home to several sought-after resort destinations, such as Palm Springs, California.  Here, a shot of the Korakia Pensione in Palm Springs proves that life in the desert is anything but rustic.

Horseback riding is a fun way to explore the Sonoran without getting sand in your shoes.  Pack a camera, and get ready to take plenty of shots like this, with mountains on the horizon and a saguaro cactus taking center stage.

Palm Springs, California is a design lover’s dream, bursting with mid-century modern architecture and other design elements.  And, no matter where you look, there is always a jaw-dropping desert view in the background.

This postcard-perfect desert oasis isn’t a Hollywood movie set – it’s a naturally occurring real-life oasis, surrounding a desert lake in the foothills of the Inca Desert.  The small 200-meter lake supports the tiny village of Huacachina with a permanent population of only 100 residents.  At night and with sand dunes on all sides, Huacachina glows like an island of light in the center of the stark desert landscape.

A romantic local legend tells the story of how this lagoon came to be.  The story explains that once many years ago, a local princess was bathing in the spot that is now the oasis.  A young hunter came across the princess, startling her.  She fled, leaving a pool of water behind that became the lagoon.  The legend tells that the princess still inhabits the lake today in the form of a mermaid, and a mermaid statue has been erected in her honor on lagoon’s banks.

While its permanent population is small, Huacachina draws tourists and sports enthusiasts from around the globe, and boasts several resorts for housing its many visitors.

This Instagram shot by @amyebansky gives us an idyllic view from the top of a nearby sand dune, and pretty much sums up the desert vacation of our dreams.

This cerulean blue waterfall paradise may not look like a desert, but it actually resides within the Grand Canyon National Park, surrounded by sand and rock.  This is a place made beautiful by its many contrasts – red rocks and blue water, desert terrain and lush green oases.  And while this location is remote, it continues to draw more than 20,000 visitors each year.

The shockingly blue water of the Havasu Creek (due to its high concentration of calcium carbonate) is irresistible to swimmers, and other sports enthusiasts.  Kayak, paddleboard, or just float along the cool blue water, admiring the scenery as you pass.

Venture away from the falls and you’re quickly reminded that Havasu is surrounded by a beautiful but stark desert landscape.  Here, a prickly pear cactus overlooks the rocky cliff-face walls of Havasu Canyon.

In contrast to the Sonoran Desert to the South, the Mojave Desert (the ‘high desert’) is a harsher environment, encompassing the lowest and hottest place in North America – Death Valley.  A series of mountains and valleys create a landscape that’s beautiful and varied.  In this shot, a joshua tree eclipses one such mountain view, in breathtaking hues of blue and purple.

While the population in the Mojave Desert is sparse, this prefab home is the ultimate in desert-chic.  Called the Rock Reach House, this 1000 square foot dwelling is a prototype for others to come, and is also available for rent to eager desert enthusiasts.

Wander away from the city, and you’re treated to never-before-seen views of the night sky.  Here, the Milky Way lights up the sky in Joshua Tree National Park – a view that city dwellers will have to see to believe.

Rub’ al Khali, also called the Empty Quarter, encompasses a large portion of the Arabian Peninsula and is the largest contiguous sand desert on the planet.  Its terrain is covered by rolling mountainous sand dunes, which get their vibrant reddish-orange color from feldspar.  In this image, an orange sunset illuminates the dunes, setting their naturally occurring colors ablaze.

The Qasr Al Sarab Desert Resort is an island in the sand, and looks like the Arabian Nights fantasy of our dreams, complete with lush palms, dreamy architecture, sun kissed dunes – and yes, you can even take a camel ride, too.

The Atacama Desert has been described as otherworldly, with a landscape that at times resembles the surface of the moon.  However, a recent deluge of rain – the heaviest in 20 years – has transformed its valley into a vibrant floral wonderland with a 600-mile long bed of pink and purple flowers.

Here, hikers traverse a landscape that (if not for the strip of blue water) could almost pass for Mars.  The shocking contrast in colors from red to blue is reason enough to pay a visit.

Atacama is the driest place on earth – yet, while some places haven’t seen rain in more than 400 years, others are covered in snow that never melts.  Here, a windswept valley remains covered in a permanent layer of snow and ice.

Also known as the Great Indian Desert, the Thar Desert is a large arid sand-scape bordering India and Pakistan.  Sand dunes, salt water lakes, and sparse vegetation suggest a harsh and unforgiving environment, but Thar is actually the most densely populated desert in the world.

Camels are common in the Thar Desert, and are often spotted walking in caravans along the horizon.

Despite the muted landscape, the people of the Thar Desert dress in beautiful fabrics that are brightly colored and boldly ornamented.  Here, a small group of women dressed in fluttering florals fill water jugs at the local village well.

Perhaps the most famous desert in the world, the Sahara is steeped in romance and picturesque scenery like this.  The landscape is covered in sand dunes that often reach of 590 feet high.

Dreamy sought-after Morocco also borders the Sahara Desert.  If Marrakesh is on your vacation radar, consider a sunset camel ride into the dunes for postcard-perfect views like these.

Here, a morning wash station is set up outside of a nomadic desert camp on the side of a dune.  For adventurous types, Morocco also offers several bucket list-worthy glamping opportunities for sleeping under the desert stars.

The Namib Desert in Southern Africa is a beautiful contrast of arid desert plains that roll directly into the coastal waters of the Atlantic Ocean.

While almost completely uninhabited by humans, a few settlements do exist that host visitors.  Here the Hoanib Skeleton Coast Camp in Namibia offers glamping-style accommodations for those wishing to explore the desert and the coastline.

Kolmanskop is a ghost town in Southern Namibia that draws visitors seeking to explore what remains of this abandoned mining village.  Since its inhabitants fled, the desert has been slowly taking over the homes and buildings, filling them with sand.  Here, a sand dune spills into one home through an open doorway.  Visitors are welcome in Kolmanskop, but require a permit for entering the town.

Unlike the sand swept deserts of Africa, the Gobi Desert is cold and comprised mostly of dry grasslands and steppes.  While it receives little annual rainfall, Gobi is rich with life, history, and beautiful sun-soaked views.

Sand dunes may be found at Khongoryn Els, also called the “Singing Sands’.  Indigenous two-hump Bactrian camels traverse the sand with ease, thanks to their specially adapted feet.

History buffs with relish the many archaeological treasures still being unearthed along the ancient Silk Road that winds through Mongolia.  Thanks to the arid climate, many sites are remarkable well preserved, including this Buddhist cave dated to the Late Tang Dynasty.  The brightly colored wall paintings are still vibrant and well intact.